Gotham has returned! After an especially lengthy Winter hiatus to accommodate FOX’s six-episode X-Files event series, The Batman prequel series has come back to the airwaves, immediately building on the cliffhanger post-credits conclusion to the midseason finale back in November, which saw an unmistakable Mr. Freeze icing down a victim in the back alleys of Gotham City.

Even the very title of the episode makes its priorities clear, as, “Mr. Freeze” is the latest origin tale to unfold through the lens of this pre-Batman show, while also starting the second major arc of Season Two, subtitled, ‘Wrath of the Villains’. Nathan Darrow’s Victor Fries is by far the most appealing portrayal of Mr. Freeze in live-action to date (though the low bar of Arnold Schwarzenegger’s infamous, pun-spewing goofball Freeze from 1997 movie, Batman & Robin isn’t tough to surpass), and Darrow is well-suited to the character, who is currently an anti-social and desperate cryonics researcher who is trying to care for his terminally ill wife, Nora. Predictably, Nora has yet to be frozen during the timeline of Gotham as well, even though her husband has already started to embrace his super-villain identity, minus the chemical bath that gives him his icy complexion from DC Comics lore.

Since we’re jumping into a story arc with Mr. Freeze, one of the weaknesses that sadly comes up with this episode is that Gordon’s cold-blooded murder of Galavan from the midseason finale doesn’t end up being explored much. Gordon eventually returns to Gotham after briefly fleeing the city (which sort of addresses the big gap between Gotham’s midseason finale and midseason premiere), is briefly put on trial with Internal Affairs, complete with Harvey Dent presiding over questioning, and then… He’s let go. That’s it. Captain Barnes remains a bit suspicious of Gordon, though it never really becomes an issue, with even Dent seemingly dismissing Barnes’ concerns about Gordon when they talk about Gordon’s acquittal from the charges afterward.

Another unfortunate shortcoming that comes at the expense of the many other developments in this busy midseason premiere is the Penguin storyline, or at least how it starts. Penguin was also forced to flee after the murder of Galavan during the midseason finale, and more or less went into hiding… Until Barnes just catches him off-screen, out of nowhere, and that’s that. It really felt like the many story arcs that this episode was trying to juggle were all fighting for attention, and that led to a feeling of the midseason premiere being good, but also feeling undeniably overcrowded. Penguin further corroborates Gordon’s story, just like that, and Gordon completely escapes Barnes’ suspicions. How convenient. 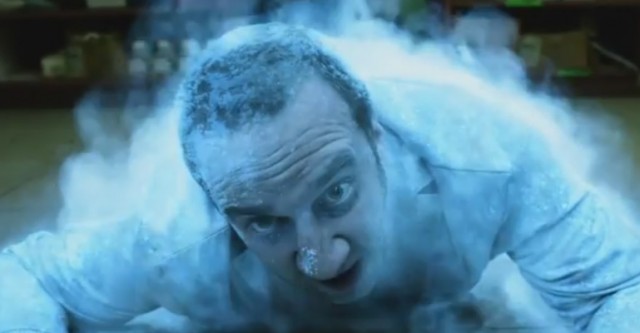 Fortunately, the second half of Penguin’s storyline in this episode fared a lot better. Penguin is shipped off to Arkham Asylum, where he tries to make a big show of being powerful, as well as being the supposed, “King of Gotham”, only to be mocked and berated by the other inmates. This is another effective way to make Penguin powerless, and to show that, in the world of the insane, his mob connections are pretty much meaningless. This also proved to be a great device for further developing Arkham Asylum on this series, as it doesn’t matter who you are or where you came from if you find yourself within its walls. Everyone is just crazy, and they’re more or less treated like animals, even if they come from money and power like Penguin does.

This also led into the effective introduction of another recognizable Batman villain, and one that seems to be taking over for Theo Galavan for the rest of this season now, Hugo Strange, played by Jurassic Park’s B.D. Wong. Strange interviews Penguin, which initially seems benign, though the effectively creepy, sinister air around his character is something that Wong captures with gusto. He’s already appearing to be a more complex and interesting villain than any that Gotham has previously portrayed, easily outclassing Galavan in terms of intrigue, especially given the way that Galavan’s storyline seemed to come apart towards the end of the ‘Rise of the Villains’ arc that served as Season Two’s first half. The strong portrayal of Strange also comes with confirmation that the mysterious “Indian Hill” facility where Bridget Pike’s proto-Firefly was taken is not only directly linked to Arkham Asylum, but even appears to be in Arkham’s very basement, where Strange seems to be running all manner of twisted experiments, and which Penguin now appears to be next in line for as a guinea pig.

As I said though, the most prevalent storyline, especially in the episode’s second half, largely deals with the up-and-coming Mr. Freeze, who is freezing and kidnapping people with super-cooled liquid helium fired from a prototype Freeze Gun, and he gets on the radar of the GCPD after he’s forced to freeze a cop to death in self-defense. The way that Freeze ends up becoming gradually more desperate as the episode goes on, even holding up a pharmacy when they refuse to fill his dying wife’s prescription medication, is very well-done, and some of the haunting imagery regarding Freeze’s experiments is excellently gross and uncomfortable, contrasting well with Hugo Strange in that regard, who is doing similarly gross and haunting things, such as convincing inmates to pull out their own eyes, just in time to scare Penguin senseless!

This episode is also merely the first part of Freeze’s origin story for the Gotham universe, as he is forced to duck the cops, leading to Nora being arrested instead, after she discovers that her husband hasn’t been experimenting on mice, but people! The GCPD is unaware of Nora’s condition so far, which almost has her husband turning himself in, until he sees that one of his frozen victims, which Nygma was briefly studying in the coroner’s office before getting some coffee and finding the man missing, is thawed out and alive. Freeze then reconsiders turning himself in, and finds renewed resolved to save Nora, now that he’s seen that he has a way to freeze her until he can find a cure for her terminal illness. It’s a predictable route for a Mr. Freeze origin story for the most part, and already seems to be telegraphing how next week’s episode is going to turn out for the character, but at least Freeze is portrayed well here, and should hopefully serve as another great villainous presence for this show.

Gotham makes par in its midseason premiere, even if this season alone has certainly had better episodes. Fortunately, the introduction to both a pre-Batman Mr. Freeze and Hugo Strange was done very well, even if Gordon didn’t seem to face any fallout at all for killing Galavan at this point. Galavan barely seemed to come up in fact, beyond a quick update with Tabitha, who is now hooking up with Butch, who has succeeded Penguin as the biggest crime boss in the city, and is doing so more or less out of boredom. As usual, the main priority of Gotham seems to be developing the recognizable Batman baddies that most people already know and recognize. It’s doing that well, even if it would be nice if it didn’t always have to come at the expense of the rest of the story that this series is developing for its own private universe.