After really letting off the leash with the comedy in the show’s especially silly previous episode, “Cheddar”, Brooklyn Nine-Nine once again seemed to deliver a more off-the-wall and silly offering in, “Terry Kitties.” With the episode name being a cute play on Terry’s shameful former police nickname, “Terry Titties”, as revealed in the show’s pilot, you can imagine what this episode is all about; Putting Jeffords’ embarrassing past under the police-issue microscope!

This was a storyline that was both very funny and surprisingly adorable. After Jeffords gets sent a box with a kitten in it from his former precinct, and reacts to it in a hostile manner, Peralta becomes confused and intrigued, and starts poking into who Jeffords was at his former precinct, the Six-Five. Apparently, when Jeffords’ former colleagues weren’t particularly nice to him, he threw himself into solving a case, only to wind up embarrassing himself horribly, and making matters even worse when he suggested in the heat of the moment that the guy’s cat was an accomplice to the crime.

While not directly confirming it, this seems to answer a big question about Terry’s former weight problem, which has only ever been seen in one flashback in the entire series to date (side note, Terry Crews in a fat suit is pretty funny on its own!), but was no doubt motivated by something bad. It was clever to have the episode reveal subtle things like Jeffords’ nasty father bullying him as a child, and Jeffords’ inability to be taken seriously at the Six-Five, since it allowed viewers to put the pieces of Jeffords’ backstory together, without straining the joke. Even beyond that, the mere joke of the hulking Jeffords acting mean and crazy to one, and later three, kittens is pretty hilarious.

Even better is that this storyline provided a chance for Jeffords and Peralta to team up, believing that Jeffords can redeem himself to the Six-Five if he solves the old case from twenty years ago. With most of the witnesses dead, and the evidence being all but disappeared, the odds are certainly against them, though as you can expect, the comedic chemistry between Andy Samberg and Terry Crews was just awesome throughout this entire episode! Things like Peralta having a freak-out on a high ledge when he realizes that he’s afraid of heights, or giving all of the kittens Die Hard-inspired names, made for some very memorable funny moments this week!

In the end, after a small bit of added humiliation, Peralta and Jeffords eventually nab the bad guy by the end, and Jeffords is able to move past his former torment at the Six-Five. This was satisfying, though the episode never really answers the questions of where the kittens end up, which feels like a bit of a sloppy oversight. It’s implied that Jeffords wants to sell them online, but we never actually see this. It might have been really funny if the kittens ended up adopted by Captain Holt, or even Scully and/or Hitchcock, though I suppose that this was too much to hope for. 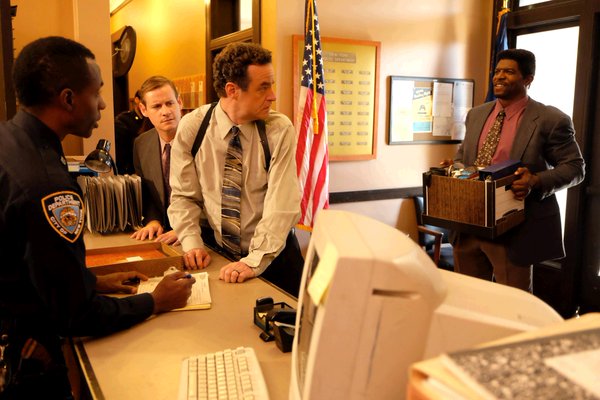 As for this episode’s subplots, they were also pretty funny and well-constructed. The funniest between the two was a bomb disposal class being taken by Santiago and Diaz, who comically compete with one another the entire time. This subplot was pure gag fodder, though it was very amusing to have Santiago futily try to put all of her efforts into trash-talking Diaz, only to be the one getting her feelings hurt when Diaz barely lifts a finger to successfully psych out Santiago. It was also a very funny twist to have Holt initially chew the two out for not taking the class seriously, only to gloat when he defuses his bomb first, saying that he’s actually the most competitive one of the lot. In a way, it felt like just desserts when all three of them ended up failing the bomb exam, which Scully and Hitchcock somehow passed, despite not even being aware that they were defusing bombs. That turnout was actually a lot funnier than everyone simply passing and learning not to be so competitive, especially when the three prove that they’ve learned nothing, by promising to compete again at a precision driving course on the weekend.

The remaining subplot was still funny, even if almost the entire thing simply hinged on how deranged Pimento is. After Pimento barges into Boyle’s place, and Boyle finds himself unable to kick him out, Gina tries to convince Boyle to man up. It’s a pretty predictable plot for the most part, even if it’s still a funny one, especially when Gina had the episode’s best joke here, when she commented that Boyle’s spirit animal is, “A caterpillar that’s been stepped on.” Fortunately, the end result was another good comedic twist, when Gina finally convinces Pimento to leave Boyle’s place, only to have Boyle ask the question if Gina did this of her own will, or if Boyle intentionally became so pathetic that he tricked Gina into helping him. It’s a good question, and Gina’s disgusted reaction to her potential defeat was very funny. 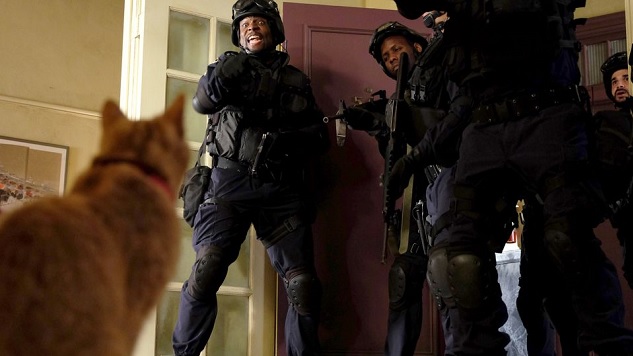 Brooklyn Nine-Nine continues to impress with its latest episode, which is actually making its less predictable airing schedule for March, and presumably April, pretty annoying. Still, “Terry Kitties” was a very well-written episode that was incredibly funny throughout. Every one of the plots was a winner, between Jeffords facing his past, to Boyle facing his manhood, and Santiago and Diaz facing each other. The surprising turnouts of each plot made the end results all the better, even if it’s too bad that the kittens couldn’t have enjoyed a similar resolution.