Fear the Walking Dead didn’t seem like it had gained any traction in its second season premiere last week. The show is still too much of an annoying bore, with uninteresting and often infuriating lead characters for the most part. Sadly, this feeling got even worse this week, in, “We All Fall Down”, a filler episode with a storyline that ended up going nowhere, and one that ultimately wimped out of truly challenging the show’s already shaky dynamic.

After the season premiere kept the leads purely on the water, this episode brought them ashore to Catalina Island, after Strand decides that it’s probably best to avoid the mysterious pursuer that may or may not be that unsettling fellow that Alicia was talking with in the previous episode. After deciding that Catalina has a way to communicate with the military, and might contain more information on the status of the West Coast after the outbreak, the boat makes for that location. 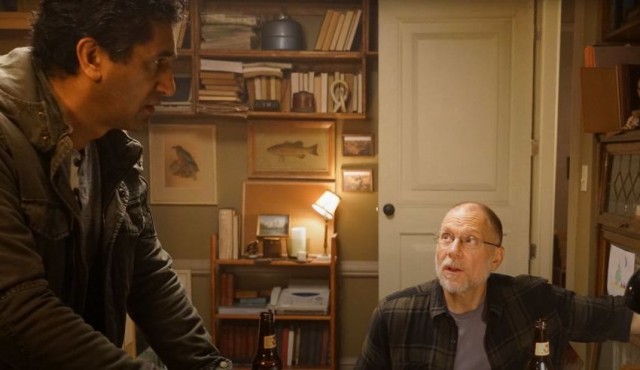 This is a fair enough start to the episode, especially when the leads encounter a family of naturalist survivors, led by George, a patriarch who thinks that the whole Walker virus outbreak is nature’s way of trying to neutralize the ongoing threat of humanity seemingly destroying the planet. The scenes with George, who often has philosophical debates with a more grounded Travis, were easily the episode’s best scenes, even though Travis did regress a bit as a character this week, once again bellyaching about his son spearing Walkers on the beach after they’re caught in a fence.

Predictably, Chris is still rather upset about the loss of his mother, and his father having to put her down, and he decides to express this by spearing said Walkers with the eldest survivors’ son, Seth, who shows Chris the best ways to put down zombies. This idea of Chris possibly becoming another presence like Daniel that is willing to do whatever is necessary to get by after the onset of the Walker apocalypse, is a very interesting one, and could hopefully lead to his character ceasing to become yet another annoying greenhorn in a show that is full of way too many annoying greenhorns at this point. Speaking of, seeing Travis go back to whining about his son doing honest work by keeping Walkers away from a protective fence was very irritating. The show looked like it was toughening up Travis in the season premiere last week, but it looks like that character change still has some growing pains to go through, since he’s back to having an unrealistically weak stomach when it comes to killing Walkers, even when it’s clearly established at this point that Walkers are dangerous, are far too great in numbers to contain, and cannot be saved. 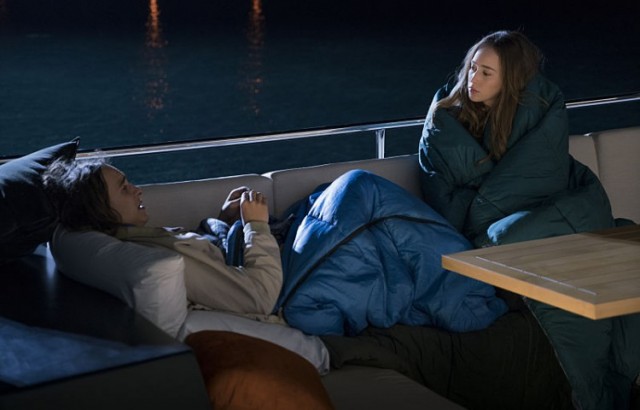 Strand, as usual, also remains a bright spot on this show, alongside Daniel, though the show really seems to be putting the Salazar family on the bench for now. Daniel and Ofelia both did nothing but bumble around the ship this week, and were pretty much entirely sidelined, having exactly zero bearing on the storyline. Daniel begins to suggest that he doesn’t totally trust Strand, but that’s it. Ofelia is barely even glimpsed. Daniel’s fears with Strand turn out to be founded, mind you, as Strand takes a call from a mysterious person or persons at one point in the episode, appearing to reference the fact that Strand has some potentially sinister plans for his passengers, making for another decent scene in a largely unimpressive episode. As you can imagine however, this merely amounts to teases for storylines to come later in the season.

Beyond this handful of bright spots, the episode quickly devolved into a combination of boredom and stupidity, sadly. Most of the episode was pure filler, having Nick, Alicia, Chris and Madison interact with the survivors on Catalina about pointless things, in a location they don’t ultimately stay in, and with people that aren’t ultimately seen again. The episode makes you think that the crew is about to expand, when the survivor wife, Melissa begs Madison to take her children along, and Madison inexplicably goes along with that plan, even twisting Travis’ arm to that effect, but then it just… Doesn’t happen. 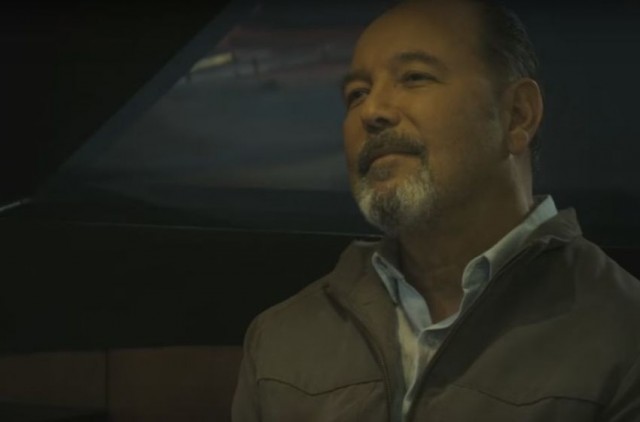 That’s no doubt for the best, since Madison wanting to suddenly bring two strange children onto Abigail for barely any reason is beyond idiotic, especially when the group has strained resources as it is. I get that Madison is new to the Walker apocalypse, but in the midseason premiere, she rightly didn’t save a whole boat of people that Abigail couldn’t sustain, and now she’ll just take the kids of some unknown person on a whim? This show just can’t seem to stay consistent with its characters’ motivations at this point, and the constant excuses to make them do stupid things like this are starting to really get out of hand!

By far the most infuriating part of the episode though was the ending, which was clearly rushed and sloppily written. After preparing a batch of suicide pills for his family, and resigning himself to the apparent new natural order, George suddenly changes his mind about Madison taking his surviving young son after his daughter takes her suicide pill too early, and takes a chunk out of Melissa’s neck when she re-animates into a Walker. George then seemingly kills himself, and the leads look to be recruiting the young boy, until the older son comes, points a gun at everyone, takes the boy back, then he shoots the shambling and turned Melissa in front of the boy, and the episode just ends with Abigail going away, as Madison quite literally waves like an idiot. What the hell was that?! This episode backpedaled so hard on its plot developments in the eleventh hour that it practically flipped onto its own face! This left the episode accomplishing nothing, beyond wasting the viewers’ time some more, and ultimately wimping out of any debates that it brought up.

It’s still a bit understandable that Fear the Walking Dead would still be trying to find its groove in the early reaches of its extended second season, but the show is really not starting its new and larger selection of episodes well at all. The lead characters are still a mess of muddled, inconsistent personalities that are constantly pushed forward by stupid, contrived decisions and plot turns, and that becomes more apparent than ever in an episode with an irrelevant storyline that just goes nowhere. Maybe Abigail’s next stop will be a more noteworthy one, but it had better make an eventful docking soon, because this spin-off can’t coast on the Walking Dead brand forever, before more people start noticing that this show just isn’t good enough.