After former Doctor Who Companion actress, Jenna Coleman departed the show at the end of Series Nine last year, leaving the presence of Clara Oswald requiring a replacement in The Doctor’s time-hopping travels, speculation ran wild as to who would next be accompanying Peter Capaldi’s Twelfth Doctor. Now, we have an answer.

Pearl Mackie, whose latest of few acting credits is ironically a BBC series called Doctors, has been cast as Bill, the newest in the decades-long line of Doctor Who Companions, ordinary humans who accompany the immortal alien Doctor on his adventures. Not much is known about Bill at this point, though the BBC released a short clip of the Twelfth Doctor fleeing several Daleks with his new Companion to make the announcement, which appears to portray her as an inquisitive, sunny and laid-back presence. The BBC also released a photo of Mackie standing in front of the TARDIS alongside current Doctor actor, Peter Capaldi, which you can check out below: 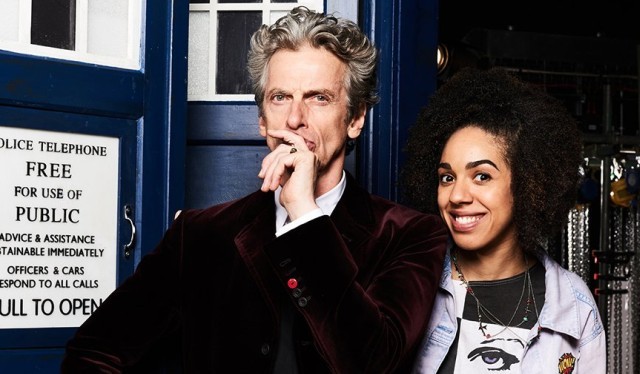 Bill will be a main series lead in the upcoming Series Ten of Doctor Who, which won’t air this year, and will instead be targeting a premiere on BBC channels, or the Space Channel for us Canadians, in Spring of 2017. It’s possible that Bill may be introduced at the end of this year however, since, despite the show almost entirely sitting out 2016, showrunner, Steven Moffat has confirmed that the series will still air a traditional one-off Christmas special this Holiday season. Series Ten will mark Moffatt’s final season as showrunner for Doctor Who, before he’s replaced by Broadchurch’s Chris Chibnall. While it’s rumoured that Series Ten will also be Peter Capaldi’s last season as The Doctor, Capaldi has confirmed that The BBC has invited him to stay on the series if he chooses, after Moffat’s departure.

Keep warping to Eggplante for all major news and updates on Doctor Who.