After much hype and anticipation, beloved cult filmmaker and DC Comics superfan, Kevin Smith has directed the episode of The Flash that he promised this week, and sure enough, it doesn’t disappoint! “The Runaway Dinosaur” is another of Season Two’s strongest episodes overall, being a wonderfully emotional journey for Barry as he attempts to return to the real world from within the Speed Force, while those waiting for him at S.T.A.R. Labs have to deal with a very pressing metahuman problem.

Despite the seemingly obvious giveaway that the resulting energy wave from Wells’ experiment on Barry has now given Jesse and Wally their own super-speed abilities from DC Comics lore, the show did a surprisingly great job of playing with viewers’ expectations this week, especially with Wally. Jesse ends up comatose, with Henry having to look after her, while Wally seems virtually unaffected, and goes back to the West house with seemingly no changes. Detective West even breaks a favoured mug that Iris gave him, trying to prove that Wally has changed, when in reality, he clearly hasn’t at this point. 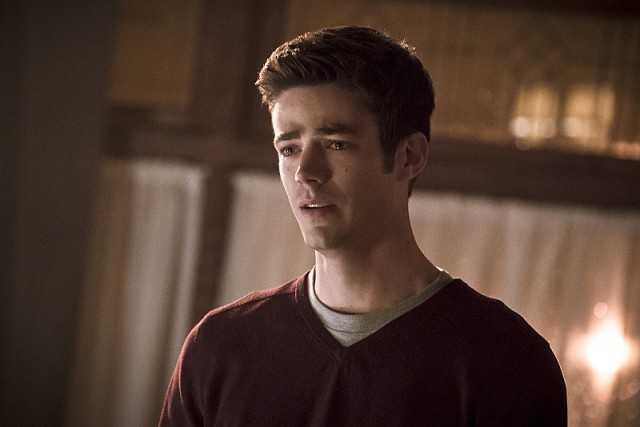 It’s good that the show didn’t have Wally and Jesse immediately and triumphantly join Barry as fellow speedsters that could help him stand against Zoom, since it’s pretty late in the season to have that big development go anywhere interesting or satisfying. There’s definitely hints of this potential direction for both characters in Season Three this Fall, but for now, they didn’t really intrude on the major storyline of the episode, and that’s a good thing. Having Wally and Jesse suddenly develop their familiar powers from DC lore would undermine Barry’s own all-important journey in this episode, and when the journey is as good as it is, that would have ruined what turned out to be a stellar offering for this series.

Barry, meanwhile, finds himself in a surreal world of past memories, and potential present experiences, as he interacts with the Speed Force itself, taking the form of various familiar faces from his life. Barry is naturally impatient to get back to Earth and aid his friends in the imminently approaching fight against Zoom, but the Speed Force has a key lesson for Barry that he needs to learn. After some clever science from Cisco and Wells, Barry is given the potential chance to return to Earth without said lesson, but if he does, he’ll do so without his speed again. Wisely, Barry opts to remain in the dimension of the Speed Force, in order to pursue whatever higher wisdom it wishes him to seek out. 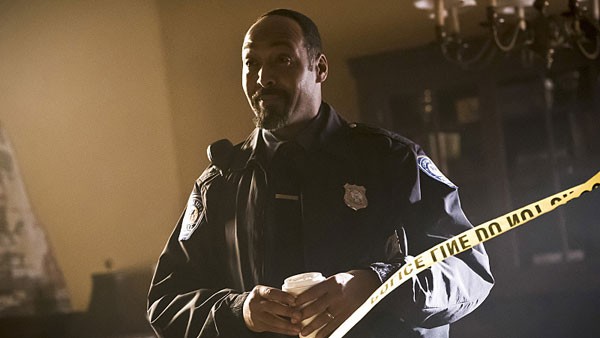 Smith’s talents as a director were utilized incredibly well in this episode. While the episode was quite dramatic for Barry, who faced a montage of his successes and failures over the course of his journey as The Flash so far, there were also clever bits of humour that were thrown in to the subplot back on Earth, which created a great mix of fun to avoid the show suddenly becoming too heavy here. Particularly funny was the expected cameo by Smith’s filmmaking and fanboy’ing pal, Jason Mewes, who plays a Central City citizen on a date (probably an online date), one that’s shooting well above his intellect, only to have this week’s metahuman destroy his car, which turns out to be his mother’s car. It’s pretty much a throwaway joke, but it’s still great, especially for those who are aware of Kevin Smith and his directing filmography, along with his history with Mewes.

Speaking of this week’s metahuman, it’s Girder, the previously dead metahuman that kicked the bucket in the fight against Blackout early in Season One. Apparently, the energy wave from the attempt to get Barry’s powers back somehow re-animated him, and turned him into a zombie of sorts, one that is now running through Central City looking for Iris, as that’s his largest and most recent memory. There were some effective inside jokes with the zombie Girder, especially since actor, Greg Finley previously had a recurring role in the latest season of The CW’s sibling comic book show, iZombie as a zombified crook (Cisco even humourously refers to Girder as, “iZombie” at one point, humourously spelling this nod out), but beyond that, Girder’s inclusion was a little bit pointless. It felt like he was picked at random to give the characters in the real world something to do, rather than simply sit on their hands and wait for Barry to come back.

Still, Barry’s ultimate purpose in the Speed Force dimension is very satisfying, and downright tear-jerking. When the Speed Force takes the form of his mother, Barry is forced to confront never truly accepting or understanding the moment where he had to let her die in the Season One finale, and this is nicely framed by the two reading Barry’s favourite childhood book, The Runaway Dinosaur, which explains to Barry that he lives for the benefit of his mother and the legions of people that The Flash has saved, and that his real gift beyond his abilities is understanding and undertaking the weight of that responsibility. This was a fantastic way to cap off the ongoing arc of the powerless Barry, and when Iris, via Cisco’s science trickery, helps to pull Barry back to Earth, his powers have returned, allowing him to save the day by powering up a device that returns Girder to the afterlife!

Of course, Team Flash certainly isn’t out of the woods, despite Barry having now regained his speed. The episode’s epilogue helpfully reminds us of what’s at stake for the season’s final two episodes, as Zoom tells Caitlin to make her choice of where she’ll stand in the coming invasion, and if she chooses her friends, Zoom will not show her mercy. Zoom then makes a short speech to his army of metahuman baddies from Earth-Two, as they prepare their invasion of Central City from the CCPD building. It looks like there’s a few nods to recognizable DC characters in this crowd of metahumans, though some are probably just generic, made-up foes. Still, I definitely feel like I recognized a DC Television Universe version of Livewire, a separate version of whom engaged Barry in the Supergirl crossover episode on CBS, or Global for us Canadians. I also think I saw altered versions of DC heroines, Fire and Ice, as well as what looked to be The Question? That would explain the Hub City teases that the DC Television Universe has been abusing lately on both Arrow and Legends of Tomorrow, but why would The Question be working for Zoom, even from Earth-Two? Like I said, it could just be an Easter egg. 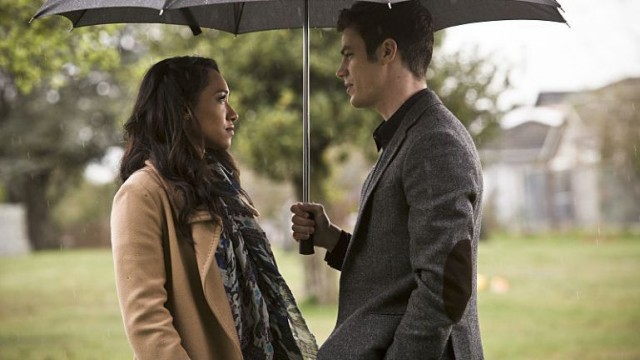 Regardless, “The Runaway Dinosaur” was an excellent conclusion to the challenge of Barry regaining his powers, and a perfect way to lay the groundwork for the season’s big climax, which will unfold over the final two episodes to come. With Barry’s wisdom and resolve renewed alongside his powers, he may just have the edge he needs to stand against Zoom at last, and while it’d still be a bit troublesome if Jesse and Wally developed their own super-speed now, they could also serve as a possible ace in the hole if things get sticky. Whatever ends up happening though, Barry’s definitely got his work cut out for him, as even before engaging Zoom, he and S.T.A.R. Labs have a whole army of metahumans to fight through first!

The Flash 2.21: "The Runaway Dinosaur" Review
The Kevin Smith-directed episode of The Flash serves as one of this season's best offerings this week, as Barry must journey through the Speed Force to reach higher heroic wisdom.
THE GOOD STUFF
THE NOT-SO-GOOD STUFF
2016-05-12
95%Overall Score
Reader Rating: (0 Votes)
0%