UPDATE: The Hollywood Reporter has expanded upon Variety’s scoop, claiming that the reason why talks initially broke down with Keaton is that Keaton felt that Marvel’s salary offer was too small, after Marvel changed the deal upon hiring Robert Downey Jr. to play a role in, “Spider-Man: Homecoming.” This would seem to suggest that Downey Jr’s role in the movie is fairly pivotal, and will apparently tie into a costume change for Spidey in the movie, which will see the ‘web wings’ from certain Spider-Man costumes in Marvel lore being added to the costume debuted in, “Captain America: Civil War” this year. Due to some sizable negotiating between Keaton, Sony and Marvel however, the three parties have now reached an agreement on a new salary for Keaton, which is why he is back in talks to play the movie’s unspecified villain, whom Variety reports as being The Vulture.

It’s a pretty sizable day for Marvel news, namely regarding the Marvel Cinematic Universe movies set to arrive in theatres next year, with official Hollywood source, Variety reporting on a rather interesting scoop related to next year’s MCU-set Spider-Man movie reboot, Spider-Man: Homecoming. After talks initially broke down, it looks like former Batman star, Michael Keaton is once again in talks to play one of the film’s two villains, which should be good news to superhero movie enthusiasts.

Yes, the movie will apparently feature two villains, which lines up with recent rumours surrounding the movie, namely the identity of exactly which baddie Keaton is negotiating a deal for. According to Variety, a very reliable outlet when it comes to movie scoops, Keaton’s primary villain will be Adrian Toomes, a.k.a. The Vulture, once again lining up with prior rumblings about the villain’s identity in Spider-Man: Homecoming. Not only that, but The Vulture’s flying suit will be built by a second recognizable Marvel villain, The Tinkerer, who has yet to be cast. The Tinkerer will also apparently build The Vulture’s suit using salvaged Chitauri technology from the big climax of The Avengers, as a way to further tie Spider-Man: Homecoming into the established lore of the Marvel Cinematic Universe. 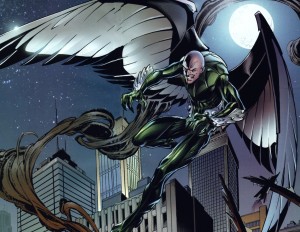 Allegedly, talks with Keaton initially fell through due to Marvel wanting to push for the inclusion of Robert Downey Jr. in the movie, with RDJ since inking a deal to return as Tony Stark/Iron Man in Spider-Man: Homecoming, though the size of his role isn’t yet known. Sony Pictures was apparently the main party pushing for Keaton’s involvement, and especially for The Vulture as the movie’s main antagonist, as Sony has tried and failed to create a big screen incarnation of The Vulture on two separate occasions already. The Vulture was meant to be the main villain of Sam Raimi’s aborted Spider-Man 4, where he was set to be portrayed by John Malkovich, and the character was also teased in 2014’s The Amazing Spider-Man 2, when his flying harness was glimpsed alongside the mechanized tentacles of Doctor Octopus in the background of a brief scene. This glimpse was meant to set up the since-shelved Sinister Six movie that was supposed to come out this year, before Sony and Marvel made their sharing deal with the Spider-Man movie rights, which prematurely terminated Sony’s Amazing Spider-Man movie universe.

You can currently glimpse new Spider-Man actor, Tom Holland debuting the character in Captain America: Civil War, which will be crossing the $1 billion worldwide gross mark today, now placing it as the top-grossing movie of 2016 so far. We were absolutely enthralled with Captain America: Civil War, which we awarded an overall 96% score, extensively praising its smart political plotline, insane action sequences, and outstanding use of a diverse cast of Marvel characters.

Keep swinging to Eggplante for all major news and updates on Spider-Man: Homecoming, and other big developments for the Marvel Cinematic Universe.