Agents of S.H.I.E.L.D. is re-inventing itself yet again for the coming of Season Four, after two largely successful seasons of Inhuman hunting and incognito shadow operations from Coulson and crew. With HYDRA seemingly obliterated in the Marvel Cinematic Universe at this point (even if that’s bound to be undone at some point down the line), S.H.I.E.L.D. can now be re-legitimized under the public eye, complete with a new director, which puts Coulson back in the field, and scatters the show’s classic crew across a variety of new stations that prevent them from directly working with each other. This is made worse by Daisy, feeling guilt over the death of Lincoln and the destruction caused by Hive last season, going off on her own to operate as a traveling vigilante, adopting her ‘Quake’ mantle from Marvel Comics lore.

Enough about those pesky character politics for a new television season though. What about that other big angle that ABC and Marvel have been hyping up like crazy for the fourth season of Agents of S.H.I.E.L.D.? Yes, beloved demon-hunting Marvel anti-hero, Ghost Rider is making his debut in the Marvel Cinematic Universe with this season premiere, aptly titled, “The Ghost”, and that’s probably the main draw for many Marvel fans and would-be viewers. Hell, ABC even splashed the show’s entire branding and advertisements for this new season with a ‘Ghost Rider‘ subtitle, after the ‘Fallen Agent‘ subtitle from the final handful of episodes from last season, seemingly fully borrowing a page from rival DC Comics series, Gotham’s playbook over on FOX, and naming various sections of Agents of S.H.I.E.L.D. seasons as if they were ‘Volumes’ from a comic book series.

Some may be disappointed that the more recognizable Johnny Blaze wasn’t chosen to be the Ghost Rider of the MCU, though as I pointed out in past writings, it’s likely that Marvel opted for Reyes not only to provide more ethnic diversity for the MCU’s heroes, but also because it’s better for avoiding audience confusion between Johnny Blaze, and Fantastic Four member, Johnny Storm, a.k.a. The Human Torch. 20th Century Fox still currently has the Fantastic Four license, though Marvel is no doubt thinking ahead, since it’s very probable that the license will end up back in Marvel’s hands soon, or at least the creative dominion over it will, after the fiasco of last year’s disastrous Fantastic Four movie reboot from Fox.

We’re only starting to get to know Gabriel Luna’s Robbie Reyes, but already, we see the important bullet points about his character in this episode. Quake encounters Reyes in Los Angeles in this season premiere, the same stomping grounds of the character from Marvel Comics lore, and believes him to be a serial killer, after Reyes’ Ghost Rider takes out several thugs that have stolen a weapon that she’s tracking. It’s small wonder too, since Reyes’ Rider appears to be extremely violent, even brutally murdering a criminal by ramming his car into the guy while he’s chained to a wall at one point in the episode, though the question of how much of that is Reyes, and how much is the Rider, is one that comes up several times. Reyes is clearly a good man, one that works an honest living as a mechanic, and works hard to care for his paralyzed brother, Gabe, but he seems to be unable to resist the bloodthirsty nature of the Spirit of Vengeance at this point. Reyes even seems to sport the Penance Stare that defined classic Ghost Rider characters, whereupon they irreversibly scorch the souls with the spirits of the people they’ve hurt and killed, an ability that Reyes doesn’t have in Marvel Comics lore, though since he’s seemingly the only Ghost Rider in the MCU, it’s likely that this new take on the character is going to borrow some elements from Johnny Blaze’s and possibly Danny Ketch’s backstories and abilities, especially since Reyes’ Rider clearly resembles Blaze’s Rider in the MCU.

The violent, turbulent intrigue of Reyes firmly overshadows just about everything else in this episode, as you can see. It’s the primary vector to illustrate a yet more darker and more adult-oriented version of Agents of S.H.I.E.L.D., one that seems to be trying to borrow more inspiration from the adult-oriented Marvel shows on Netflix like Daredevil. This is certainly interesting, though for now, the show’s cast does little more than set up events to come. Coulson being back in the field doesn’t seem to have much consequence yet, beyond Coulson and Mack trying to defy the new director’s orders to chase Daisy, and they don’t even succeed at that. May also struggles with her new place away from the team, despite begrudgingly trying to stay on the director’s good side, and it seems like everyone, even Fitz, is distrusting of Simmons, who is now the director’s favourite advisor, apparently. It’s a lot of conversations, but not much happens beyond a bunch of idle disagreeing that never goes anywhere. Honestly, it might have made for a tighter and more appealing episode if the S.H.I.E.L.D. crew was cut out entirely, and this season premiere fully revolved around Daisy hunting Ghost Rider, which is a more interesting, forward-moving story at this point. 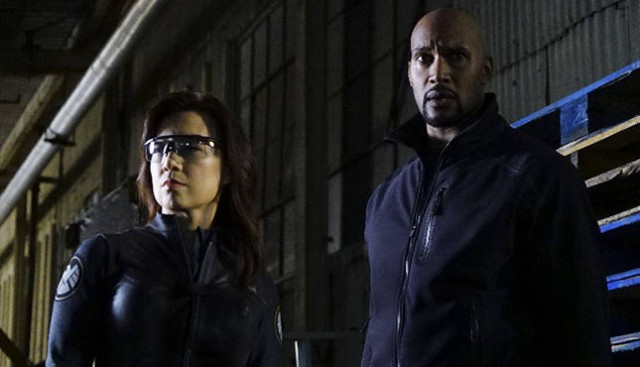 Fitz is given a bit more to do in this season premiere, fortunately, as he goes to Radcliffe’s place for a soccer match, only to learn the hard way that Radcliffe has designed a fully-functional human-mimicking robot called AIDA. AIDA was built by scientist, Tom Thumb in Marvel Comics lore, though perhaps Radcliffe is operating as a stand-in for Thumb in the MCU, which would make sense. More importantly though, AIDA serves as the official introduction of ‘Life-Model Decoys’ in the MCU, human-like robots that perform simple tasks and serve as literal decoys to protect people from attackers. Life-Model Decoys are a mainstay of Marvel Comics lore, and were first teased in 2012 crossover movie, The Avengers when Tony Stark tries to blow off Coulson by claiming that he’s a Life-Model Decoy (suggesting that Stark Industries has also developed this technology in the MCU, likely with the collaboration of S.H.I.E.L.D. at the time, and simply hasn’t gone public with it), though for now, AIDA simply supplies some welcome comic relief in what’s otherwise a very dark, grim episode. The implications of her creation are likely just another tease for later in the season, especially when Fitz transparently avoids telling Simmons, no doubt to have that bite him the ass later, though a reformed Radcliffe also presents plenty of promise.

As you can see though, as entertaining as pockets of this season premiere were, it doesn’t feel like much of note really happens beyond the Ghost Rider introduction, even factoring in S.H.I.E.L.D. being re-legitimized. The lead cast argues among each other about this and that, Daisy hunts Reyes, Coulson and Mack hunt Daisy (and don’t even find her), the new S.H.I.E.L.D. director is talked about, but never seen, Yo-Yo briefly shows up to remind us that the Sokovia Accords from Captain America: Civil War are still in play for the MCU, Daisy and Reyes have a little fight, and that’s about it. Much like the season premiere of Gotham from the previous day, it feels like this season premiere of Agents of S.H.I.E.L.D. is just jumping around and frantically laying the groundwork for an especially ambitious new season, without really standing on its own. That’s fine, and that promise is certainly felt, especially when Ghost Rider steals the show in this episode, but it’s tough to feel fully satisfied when it seems like literally none of the story elements from this season premiere end up resolved in any way by the end.

Maybe this gutsy, overstuffed teasing focus is just going to be a regular strategy for this season’s returning comic book shows’ premieres, but it’s not until a bunch of gangsters accidentally unleash some sort of violent spirit that the story seems to take a turn that wasn’t already revealed at the end of last season, and even then, this doesn’t provide any resolution, save for more teases, including a tease from the showrunners that this mysterious ghost, Ghost Rider and the after-effects of both, are going to set up some of the events of November’s Marvel Studios movie, Doctor Strange. “The Ghost” represents more of simply that; Teases, teases, teases. What’s here is fun, and the new stakes and shifted direction have plenty of intrigue, but Agents of S.H.I.E.L.D. seems to have less forward movement than the similarly-overstuffed season premiere of Gotham, salvaged a bit by introducing a beloved new anti-hero to the MCU. I guess if we want to see any resolution to anything, we’ll just have to come back next week, though if the show is still entertaining in its darker new direction, I suppose it could be worse.

Agents of S.H.I.E.L.D. 4.1: "The Ghost" Review
Agents of S.H.I.E.L.D. presents a fun, but sluggish season premiere comprised entirely of teases for later, along with one kick-ass introduction of Ghost Rider to the Marvel Cinematic Universe.
THE GOOD STUFF
THE NOT-SO-GOOD STUFF
2016-09-21
77%Overall Score
Reader Rating: (0 Votes)
0%