After an enjoyable, but somewhat cluttered season premiere, Agents of S.H.I.E.L.D. improved a bit in this week’s episode, “Meet the New Boss.” As promised, we finally learn the identity of the mysterious new S.H.I.E.L.D. director this week… Sort of. We at least learn that his name is Jeffrey, and considering a big twist with him later, and his not-so-casual mention of Captain America going AWOL, referencing the conclusion to Captain America: Civil War, we can almost certainly ascertain that the new director is none other than Jeffrey Mace, a.k.a. Marvel Comics superhero, Patriot.

Marvel and ABC don’t outright spell out that, “Jeffrey” is Patriot yet, only revealing in pre-release marketing that Jason O’Mara would portray the new director and nothing else, but the writing is pretty firmly on the wall. We even learn a surprising twist later in the episode that further strengthens the evidence, namely that the new director is an Inhuman, and that Coulson intentionally insisted on an Inhuman S.H.I.E.L.D. director to succeed him for the organization’s re-legitimacy, to lead the public by example when it comes to trusting powered people. Patriot isn’t an Inhuman in Marvel Comics lore, but he does possess the same superhuman strength and durability that this new S.H.I.E.L.D. director does, which is why Patriot served as a stand-in for Captain America during Cap’s time being frozen after WWII in classic Marvel Comics canon. This was a way of Marvel explaining why their Golden Age Captain America stories still seemed to continue in the 1950’s, despite a retcon that later confirmed Cap being frozen before WWII ended, as is also the case in the Marvel Cinematic Universe. 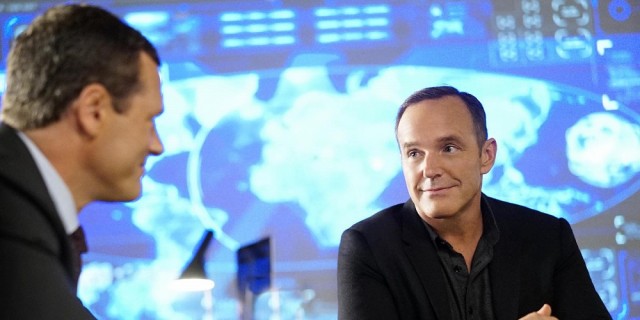 The new S.H.I.E.L.D. director and his likely identity as the MCU incarnation of Patriot is fairly exciting for Marvel fans (though no direct connection between Jeffrey and Cap has yet been established for the MCU), though even beyond that, his character introduction is an appealing and interesting new way to illustrate how S.H.I.E.L.D. has changed. The season premiere seemed to paint Jeffrey as something of an insufferable stickler by second-hand accounts, but surprisingly, now that we actually meet him here, we see that he’s a chipper, friendly, sociable, reasonable and outwardly trustworthy person. He’s, dare I say, a shining example of a good S.H.I.E.L.D. director at this point! This was an interesting twist, since it really highlights just how much Coulson’s crew have thrived as mavericks and loose cannons with no oversight over the past couple of seasons of Agents of S.H.I.E.L.D., and they’re actually having a tough time coming back into the light, and doing things in a more publicly acceptable way.

This conflict between the recognizable S.H.I.E.L.D. crew’s struggles is also highlighted in a solid way by May’s worsening condition, after coming into contact with that mysterious ghost from last week. May is continuing to see scary, threatening faces in her colleagues, and one of the imprisoned Chinese gangsters even appears to go full-out bonkers from the same symptoms, bashing his face against his cell, to the point of forcing Simmons to gas him and knock him out. Looks like this new supernatural threat isn’t screwing around. May herself even loses her grip throughout the episode, even attacking Coulson and her own students, until Jeffrey is forced to subdue her, and the episode winds down with May in a straitjacket, and being flown to some mysterious location, against Coulson’s wishes. Considering that May has always been the deadliest person on the S.H.I.E.L.D. crew, if she’s been taken out, this ghostly force means big trouble for Coulson’s team!

Naturally though, we still get plenty of Ghost Rider in this episode, or at least Robbie Reyes, with Daisy tracking down Reyes at his civilian gig. The two have another scrap, albeit without Reyes going full Rider, though Daisy’s worsening condition leads to her losing, and being tied up. Reyes probes Daisy about having a death wish, though after combing through her evidence, finds that she’s instead seeking penance, which viewers would have already known. Deciding that he has bigger fish to fry, he goes off to deal with something else, and Daisy tries and fails to keep him where she wants him, though still seems to follow him on his next spirit-squashing mission, as we see in the next sequence.

Ghost Rider himself is still a great character in his MCU incarnation, and arguably the strongest element of the new fourth season of Agents of S.H.I.E.L.D. so far. We even learn that Robbie Reyes was actually a former classmate of Daisy’s from elementary school, and they used to play arcade games together! Sadly though, most of Reyes’ job in this week’s plot is to be a Deus Ex Machina for Fitz and Mack, after they end up trapped by another angry ghost, which is let out by the original ghost. Truth be told, the ghostly villains were the weak link in this episode. They’re apparent victims of the experiments of a certain someone, and their motivations aren’t really coming together yet. There’s a lot of unanswered questions with them, and the whole idea of one of them purposefully attacking Fitz and Mack, then attempting to nuke a couple of city blocks with a reactor meltdown for some reason, just in time for Ghost Rider to come in and reduce him to ash, felt pretty contrived, as if the episode didn’t have any better ideas for a climax, and had to force one.

The subsequent scene, where Daisy has to explain away not re-joining S.H.I.E.L.D. to Fitz and Mack, worked a lot better, as did Reyes agreeing to work with Daisy to figure out what’s going on in the episode’s epilogue. The tightened storytelling definitely felt smoother and more agreeable than last week’s season premiere, though so far, the villains aren’t keeping up with the heroes in terms of appeal. Still, “Meet the New Boss” made for a satisfying way to introduce S.H.I.E.L.D.’s new director, and further flesh out the ongoing new supernatural conflict. Hopefully, when the rest of the questions with these spooks are answered, the journey of finding them and stopping them will be worth it, since it wouldn’t be ideal to have to wait until Doctor Strange before the supernatural side of the MCU starts having worthwhile weight on the canon.