The Cloud 9 employee strike has ended, and everyone is going back to their regular duties in this week’s aptly-titled Superstore episode, “Back to Work.” With Cloud 9’s District Manager, Jeff remaining on-site, Amy decides to take the opportunity to really impress corporate so that the employees’ demands can be heard, as do Glenn and Mateo, who predictably go about their own methods in a less-than-ideal way.

Considering the big boon of the employees getting their jobs back after their strike though, and getting that valuable chance to be heard by the corporate higher-ups, this episode aggressively played off of the backbone of things being business as usual for everyone’s favourite Cloud 9 branch, for better or for worse. This resulted in a good helping of reliable humour, though not every subplot worked as well as the rest, even if the main plot with Amy made for an especially strong and funny story arc. 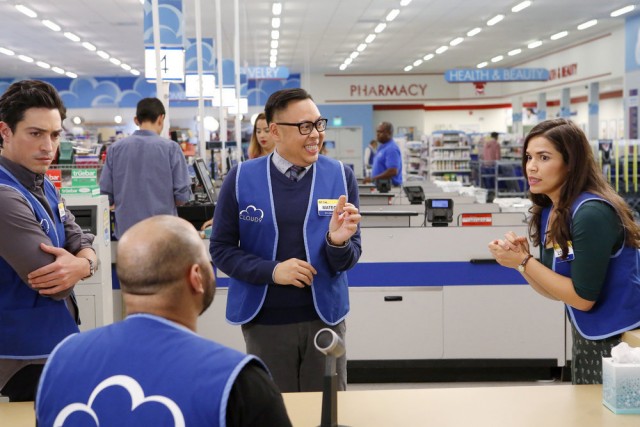 Amy’s desire to look good to her Cloud 9 superiors predictably goes up in smoke pretty fast, and the way this happens is legitimately hilarious, plus it provides a strong foundation for most of the episode’s best jokes and story elements. After a deli employee skips out on work, Amy takes an unqualified helper into the deli to try and serve an angry line, only to have the unqualified helper slice off his thumb. Everything that unfolds from this point onward is great, starting from the silent view of Amy freaking out at the accident before a commercial break, followed by Amy’s constant efforts to rally everyone together to locate the missing thumb, after it gets misplaced in a jar of guacamole.

All the while, Cheyenne comes back to Cloud 9 to visit, after Glenn gave her maternity leave at the end of Season One, though this created yet another subplot of sorts within an episode that felt a tad over-stuffed with subplots. Cheyenne’s return being ignored by Amy and most of the key employees was pretty funny, as was Cheyenne trying to scan items at an empty till to bypass a line, only to end up roped back into working without pay, in an amusing bit of minimum-wage karma. All in all though, some may be disappointed that Cheyenne’s return and subsequent neglect was treated as little more than a side gag, rather than a truly fleshed-out story, even if a lot of the jokes centering on Cheyenne at the till were pretty funny.

Surprisingly, another subplot that fell a bit flat was Dina’s, and you don’t see that happening very often on Superstore, since Dina is one of the show’s funniest characters overall. Dina and Jonah disagree on whether or not it’s important to be liked, and Dina sort of tries harder to be liked at one point, with Jonah’s help, though this subplot felt pretty half-baked in the end. Dina eventually just decides that she doesn’t care about being liked, and it makes this whole part of the episode feel like it simply ate up screentime, beyond a chuckle or two. It wasn’t a total loss though, as Dina’s revelation is what saves Amy’s job after Jeff inevitably finds out that Amy was responsible for the thumb incident, after the thumb is suddenly found by a customer. Dina being the one to bail out Amy by threatening Jeff with greater negligence was actually pretty clever, since it made use of both her outrageous knowledge of Cloud 9’s corporate structure, as well as her abrasive personality, while also making it feel like Dina did pick something up from Jonah in some small way, even if she didn’t want to.

The other subplots fighting for attention involved Glenn and Mateo, with both trying to impress Jeff and the corporate higher-ups at Cloud 9 in their own ludicrous ways. Glenn tries his best to be a hard-assed boss that constantly rides his employees to work harder, something that inevitably doesn’t work at all, and is wholly unconvincing. As with Dina’s plot though, Glenn’s subplot doesn’t feel like it amounts to anything in the end, beyond being used as gag fodder. At least Mateo’s subplot had some bit of a final result, when he goes to the lengths of harassing customers to try and give him praise in front of Jeff, only to express frustration at the end of the episode that Jeff never noticed him. Jeff places a hand on Mateo’s shoulder however, and tells him that he was noticed. This seems to be left up to interpretation, though Mateo appears to imply that Jeff may have mistaken Mateo’s ass-kissing for romantic advances. Will it be a mistake in the end? I guess that depends on whether or not Jeff sticks around, though I certainly feel like this isn’t the last we’ve seen of the Cloud 9 District Manager. 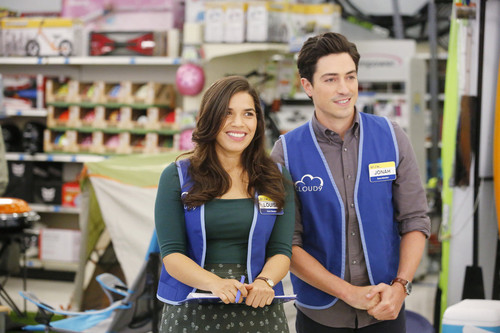 “Back to Work” didn’t really have that much fanfare, but that was probably the point. It was a good episode of Superstore that was dragged down a bit by the over-crowding of uneven subplots, though at least the main plot was quite strong, especially since Dina’s subplot at least made for a way to resolve it in a way that actually made sense. The hint of a greater relationship between Jeff and Mateo is also a promising one, even if Cheyenne coming back, however temporarily, was intentionally played off as failing to grab the attention of the main cast. Like I said, for better or worse now, it’s business as usual for Cloud 9, even if said business involves a thumb being lost in guacamole this week. Suddenly, the divine significance of that perfect work day on March 14th makes a whole lot more sense.

Superstore 2.2: "Back to Work" Review
Superstore went back to business as usual in a good, but slightly over-crowded episode this week, as most of the core Cloud 9 employees separately vie for attention.
THE GOOD STUFF
THE NOT-SO-GOOD STUFF
2016-09-30
76%Overall Score
Reader Rating: (1 Vote)
65%