Here’s something that one can’t say too often; This year has actually been a surprisingly good year for Westerns! After the recent standout release of Hell or High Water, and the imminently-debuting and highly acclaimed HBO adaptation of Westworld, the Western genre seems to finally be inching very slightly out of its perpetual modern slump. This inching appears to have continued with The Magnificent Seven, a very pleasant surprise in a September calendar that’s had far less bad movies than most (ironic, considering that this past Summer had more disappointing blockbusters than most), despite being yet another remake of a constantly remade movie that was in turn an Americanized adaptation of a Japanese movie. 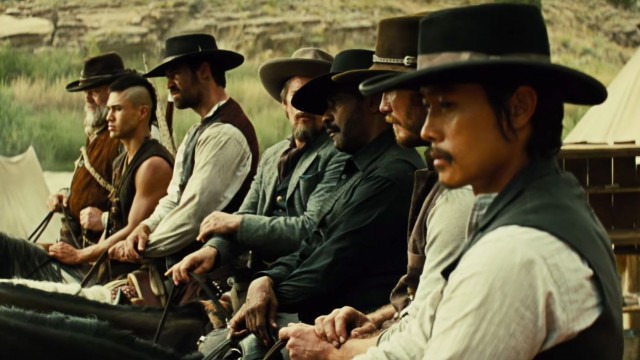 Despite all of the odds working against The Magnificent Seven however, it’s a movie that doesn’t disappoint, even if it also doesn’t bring anything new to the table, beyond the expected modern polish. This is a fun and thrilling September holdover, despite leaning on a plot that’s been done to death even well outside of the several Magnificent Seven movies that already exist, allowing this movie to function as slick, digestible comfort food for action fans and Western fans, which also makes it a worthy substitute and palette cleanser before meatier and more distinct blockbusters to come later this year.

Our titular ‘Magnificent Seven’ in this remake certainly consists of quite the solid cast! Denzel Washington leads proceedings as legitimate bounty hunter, Sam Chisolm, who first begins the process of rallying together the rest of the six titular heroes, when a desperate woman, Haley Bennett’s Emma Cullen (Bennett is also reuniting with Washington here, since they starred together in 2014’s The Equalizer, another movie made by director, Antoine Fuqua), begs for help in ousting a villain from her town. Said villain is portrayed by villain performance expert, Peter Saarsgard, that being industrialist, Bartholomew Bogue, who takes over the town for its nearby mine, and murders Emma’s husband, along with some other townsfolk, in the process. 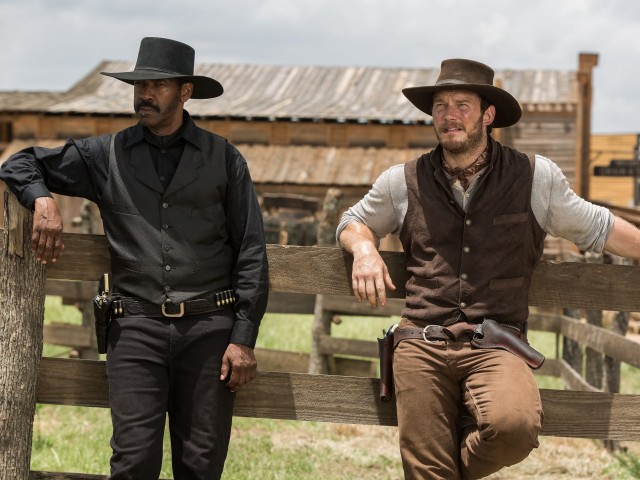 Many of the actors are sticking firmly to what they know, and that’s fine here. Bennett is yet again playing the deceptively tough pretty lady, Saarsgard is playing the resourceful, yet cowardly villain, and Washington is playing an effortlessly cool big screen hero that you can’t take your eyes off of. This familiarity also sticks around with the rest of the main cast, even if some are more distinct standouts. Chris Pratt is playing the same devil-may-care rogue that more or less serves as an earthbound Western version of Star-Lord from Guardians of the Galaxy, and Byung-hun Lee is staying true to type as a stone-cold killer of few words, though Vincent D’Onofrio at least tries for something a bit more ambitious, being a wheezing, chatty and awkward tracker that is very over-the-top in a surprisingly entertaining and memorable way. That’s before considering D’Onofrio’s own fun reunion with Pratt too, after they starred together in Jurassic World last year. Speaking of ambitious, it’s also refreshing to see a Western where the ethnic characters are played by actors of the appropriate ethnicity, with Mexican bruiser, Vasquez being played by Mexican actor, Manuel Garcia-Rulfo, and Indigenous hunter, Red Harvest played by an actual Alaskan Indigenous actor, Martin Sensmeier.

The least noteworthy of the lead heroes is Ethan Hawke, if only because he’s a bit less fun later in the movie when the action is supposed to be going down, but Hawke still does a great job in his part as Confederate sharpshooter, Goodnight Robicheaux in the earlier scenes, plus it’s cool to see yet another big reunion between Hawke and Washington, who starred together in 2001’s highly acclaimed Training Day, also directed by Antoine Fuqua. The mind-boggling number of coincidences in the lead cast is actually pretty staggering, creating the sense that The Magnificent Seven is an excuse to get its actors together simply to have a great time. Perhaps that’s what makes the movie feel so entertaining though. The great cast is plenty credible, and even if they don’t deliver characters as memorable as the most famous 1960 personalities of the original Magnificent Seven, nor the 1954 Japanese movie, Seven Samurai that inspired it, they create an enjoyable ensemble of anti-heroes that fits right in with the modern cinematic climate of misfit anti-heroes like the Suicide Squad, or of course, the Guardians of the Galaxy. 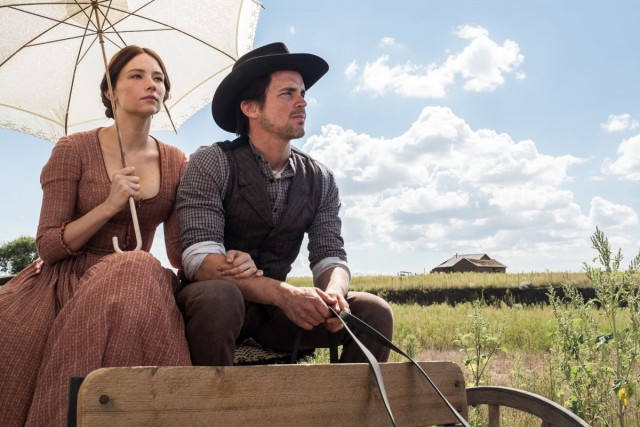 What makes the performances really shine though is the clear fact that many of these actors are obviously real-life friends, considering that most of them have worked together on big movie projects in the past, sometimes even more than once! That’s why they manage to make believable a pulling together of this very mismatched band of Western thugs and vagrants, which may not be as big of a feat now, in a cinematic world that’s becoming slowly obsessed with crossovers and big ensemble blockbusters, but is still a better-than-average feat, especially for a September release that’s serving as the latest remake of a movie that’s already been remade to death. The performances are as laid-back and natural as a real-life companionship that might have sprung from equally unlikely circumstances, so while there’s not a whole lot to dig into regarding these personalities, that’s certainly not a dealbreaker. Everyone shows up and gets the job done, and more importantly, everyone has fun, which in turn makes it easier for the audience to have fun.

If you’re looking for any real semblance of story creativity, you’re really not going to find it in The Magnificent Seven. Like I said, this is a movie that has already been remade several times, and has already had several big chunks of its storyline liberally borrowed by many other big movie and television offerings over the past several decades, and probably quite a few video games too. Hell, considering I’ve already referenced it several times, even the colossally popular Marvel Cinematic Universe came together on a premise that took inspiration from The Magnificent Seven. Remaking this movie is almost as assembly-line as it comes. This could have so easily been a phoned-in, heartless and tedious remake to watch, and that apparent expectation further makes the latest remake of The Magnificent Seven quite the pleasant surprise. 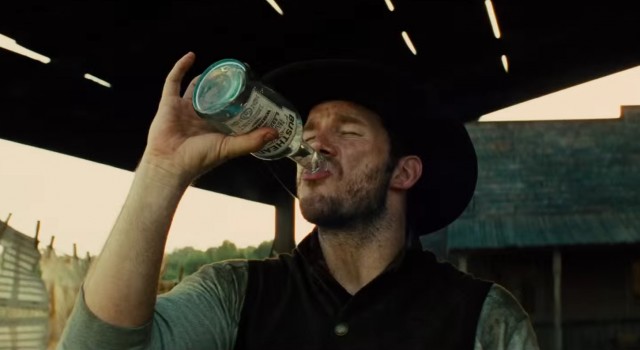 The movie’s premise is very basic by today’s standards, having a group of mismatched Wild West outlaws come together to drive away a villain from oppressing a small town, but the clever writing and dialogue make it enjoyable to go through the motions, even when you’ll know exactly how everything will inevitably unfold in advance. The only curveballs come in the climax, where certain characters will legitimately put their lives on the line for this town, leading to a result that is not wholly unexpected, but still isn’t quite as clean-cut as you may imagine. The journey is worth it regardless though, especially when The Magnificent Seven appears to actively benefit from the irony of taking so much inspiration from The Avengers and other such movie projects that its original 1960 inspiration laid the groundwork for many decades ago.

Antoine Fuqua is quite a prolific director at this point, having originally helped Denzel Washington’s rise to stardom with Training Day back in 2001, and subsequently helming quite a variable catalogue of action movies and thrillers, from Tears of the Sun to Olympus has Fallen to The Equalizer, and more. With Olympus has Fallen most notably, Fuqua has demonstrated a keen ability to get much more than you’d imagine out of an otherwise boilerplate idea. This talent is once again put front and center with The Magnificent Seven, a movie that is comprised entirely of familiar working parts, but is nonetheless elevated by a sharp sense of character and excitement.

That tightness in the direction can’t be stressed enough either, since Fuqua pushes his PG-13 rating pretty far with The Magnificent Seven. There’s only a couple of big shootouts in the movie, and they take place later on, but they are well worth the wait. The Magnificent Seven fully embraces being a kick-ass popcorn Western movie, and it is constructed beautifully in terms of these action moments. The character is front and center in the first half with a cast that Fuqua gets outstanding personality from, before giving way to an active conflict that takes these likable personalities, and puts them in hair-raising gunslinger battles on a surprisingly big scale, which effortlessly combine classic Western tropes with fast, highly-polished carnage. The carnage is especially enjoyable in the IMAX cut as well, which isn’t quite essential if you’d rather save the extra few dollars, though the especially explosive climax in particular leaps to life in a great way in the IMAX cut, so if you have money to throw around, it’s worth shelling out for the heightened enjoyment of that sequence in an IMAX theatre.

Like Olympus has Fallen, The Magnificent Seven doesn’t outwardly seem like anything interesting, especially when it’s clearly taking every element of its production from movies that already became classics many years ago. Since it manages to create such a tight, energetic popcorn flick though, the movie maximizes its simple foundation to produce a final product that is very high on simple entertainment, and Fuqua’s direction, perhaps more than any recent director to come beforehand, proves that the Western movie genre can still kick ass, even in 2016!

Compared to something like Django Unchained or Hell or High Water, the foundation behind The Magnificent Seven seems fairly unambitious as far as modern Westerns go, but seeing as it repackages one of the most basic and re-purposed Western storylines, perhaps it was the right call to avoid undue ambition. The Magnificent Seven is one of those movies that succeeds because it knows what it is, and never tries to be anything else. Thanks to a well-chosen cast, along with a very talented and inspired director choice, what probably started as a thankless Hollywood remake pitch evolved into something much more fun and much more satisfying than many could ever imagine, especially considering the fact that this movie is releasing in September. 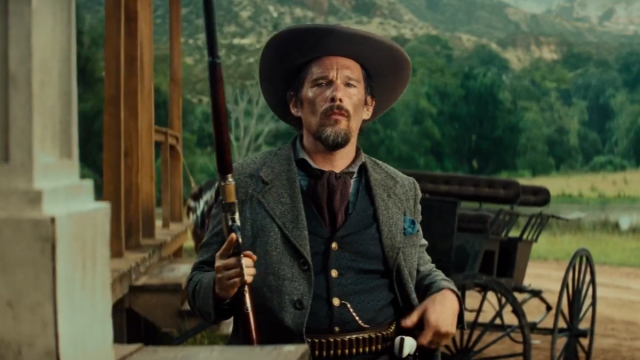 It seems hard to believe, but this 2016 remake of The Magnificent Seven does actually come close to standing with the 1960 original, even if it’s still well beneath the powerhouse masterwork of Seven Samurai. Against the odds, this could very well be the most fun and exciting take on The Magnificent Seven to date, and will definitely go down in film history as one of the most enjoyable renditions of the story. Perhaps the 1960 original still has this remake beat in terms of being impressively made and realized for the time, but that being said, The Magnificent Seven is nonetheless one of this year’s most entertaining surprise hits, and easily one of the most recommendable movies of this September. Not bad at all for a supposedly ‘dead’ genre!