NOTE: Full spoilers for this episode of “Fear the Walking Dead”, including a major character death, are present in this review

I was crossing my fingers for a worthy Fear the Walking Dead season finale this weekend, and in the first half of said season finale, “Wrath”, the show definitely didn’t disappoint! This episode brought the growing tension from throughout Season Two’s back half to a pretty great head, namely in regards to Travis losing Chris to his new frat boy running mates, and Nick defying Alejandro’s orders to try and save his new colony, which only succeeds in making him painfully aware of the doom that is right around the corner.

With the show gradually gaining a more consistent sense of quality in this season’s back half (not counting lone mis-step, “Pillar of Salt”), it’s satisfying to see that Fear the Walking Dead managed to avoid dropping the ball upon approaching the finish line, which would have been especially infuriating. Fortunately, both of the major storylines in this first portion of the two-part season finale were executed very well, while simultaneously leading into an equally promising second half, which still promises big things, even after some fairly big bombs were dropped in this episode. 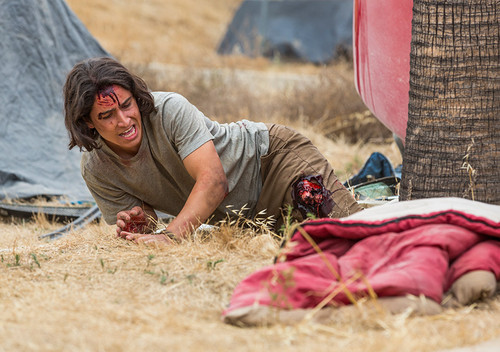 The biggest of these bombs was a direct carryover from the cliffhanger ending of last week’s episode, where Chris’s frat boy buddies, Brandon and Derek, make their way to the hotel. I thought I spied Chris with them, but I must have been mistaken, since Chris is not present. There’s a big reason for that too, even if many Agents of S.H.I.E.L.D. fans that also watch Fear the Walking Dead might have foreseen the inevitable twist. You see, Lorenzo James Henrie has just taken a gig on Agents of S.H.I.E.L.D. as Gabe Reyes, a fairly pivotal character that’s connected to the show’s and the Marvel Cinematic Universe’s new version of Ghost Rider. Since Henrie was glimpsed on Agents of S.H.I.E.L.D. a couple of weeks ago in this pivotal part, the writing was on the wall for his regular Fear the Walking Dead stint.

Yes, Chris has been killed on Fear the Walking Dead, and he was even killed off-screen to boot! Granted, the show actually makes this feel more impactful, rather than less, since Madison originally tries to boot the rather mouthy Brandon and Derek from the hotel, acting on the advice of Strand, only to unsuccessfully hide the two from Travis, who recognizes them from the upper hotel window, and runs down to grill the two young men about Chris, before they can be shuffled off. The news isn’t pretty either. 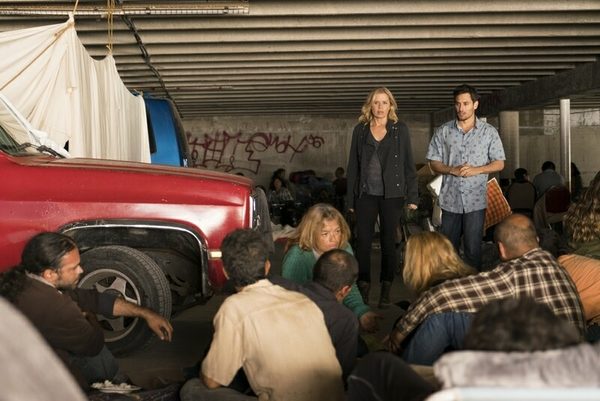 After initially lying about Chris being killed accidentally in a car wreck, Travis soon detects that the frat guys’ story doesn’t add up, so he locks himself in a room with them, and starts quite literally beating the answers out of them. This is what leads to Brandon and Derek confessing that Chris actually survived the crash, but since he had a broken leg, mirroring the fate of their fallen friend, James, Brandon shot Chris in the head and killed him, since he needed to be, “Put down.” This led to one of the most shocking, powerful and memorable moments in Fear the Walking Dead history to date, as Travis loses every ounce of his shit at the news that Chris has been so unceremoniously murdered mere days after splitting up from his father, and pretty much beats both Brandon and Derek to death, even going as far as to crush Brandon’s skull under his boot, and kill him especially brutally! This really hit home, considering that Travis has spent most of this show being the seemingly spineless voice of reason, and this bloody breaking point was one that the show built up to and executed wonderfully. Things will never be the same for Travis now, that’s for sure.

The Nick storyline didn’t have any big crescendo moments like Travis’ bloody breakdown and the off-screen murder of Chris (excluding the fact that we see the murder re-lived in flashback anyway), but it still nicely laid the groundwork for the second half of the season finale. After Alejandro reprimands Nick for sneaking off to deal with the cartel, whereupon Nick also learns that the cartel is coming after the colony, and no longer needs to deal with them for medicine, a dead patient re-animates and bites several people in the hospital, including Alejandro. Alejandro then confesses to Luciana a bit later, at Nick’s pressing, that he was never immune to Walker bites, with his ‘bite’ instead coming from a regular human addict, and the colony’s faith is built on a lie. Nick insists that he must leave with Luciana, and that’s about where we leave things. This is clearly a storyline that is going to leave its payoff for the following episode, but it still had enough shocking and satisfying turnouts to avoid feeling like a mere appetizer for what’s to come in the next hour.

The only slight sticking point to this episode, probably one of the best yet for Fear the Walking Dead as a whole, is that the Ofelia storyline feels randomly tossed in and rather pointless. Yes, despite me speculating a few reviews ago that we might not glimpse Ofelia again until Season Three next year, she does show up again in this episode, mostly to bumble around, and eventually get captured by a mysterious soldier. Her story didn’t really add anything to the episode, and largely felt pretty pointless. They could have saved it for the following episode, or, again, just left this material until Season Three. I guess it could be worse, since this turnout with the soldier is better than Ofelia unrealistically running into Daniel in the middle of nowhere, which I wouldn’t put past Fear the Walking Dead at this point, considering some of its rather questionable story elements in past episodes even this season.

“Wrath” made for an exceptional way to push the show forward, while also serving as a standout first half to this week’s season finale. Surprisingly, the lack of fanfare behind the death of Chris worked really well, especially when it pushed Travis’ character beautifully past the point of no return, and while it seems like Nick’s storyline is probably going to play the bigger part in the second half of the season finale, the inevitable fallout from Travis’ actions is sure to keep the hotel storyline going strong in the season’s final episode as well. At last, we finally have Fear the Walking Dead standing alongside the gripping drama and shocking horror of many of the best episodes from the main Walking Dead series. Will we be spoiled enough to enjoy that same standout quality in the season finale’s second half?