After kicking off the season with two excellent episodes, Legends of Tomorrow went back to its usual routine in this week’s episode, for better or for worse. “Shogun” once again brought the team to a new setting, albeit by accident, though despite the somewhat different circumstances of their latest adventure, this episode hit a lot of familiar beats for the series. This led to a good, though not standout episode that managed enough twists to be enjoyable, even if it predictably couldn’t keep pace with the big developments that started Season Two over the past two weeks.

Things begin with Amaya stowing away on the Waverider (somehow), and knocking out almost every Legend onboard, even Sara, who really should have seen her coming (hell, why didn’t Gideon automatically detect her and sound any alarms?), before holding a knife to Mick’s throat. Amaya believes that Mick is the one responsible for murdering Hourman at the end of last week’s episode, since his dying words declared that a time traveler was his killer. Why Amaya thinks Mick somehow vibrated Hourman’s heart apart, I don’t know, and in general, her reasons for ending up with the Legends feel a little shaky. I get that Amaya is distraught and emotional over the death of her JSA companion, but why would Hourman’s dying words not give her more useful information, such as, “Speedy man in yellow”? Why would Amaya assume that Mick had any means, motive or opportunity to kill Hourman? Mick being a declared criminal and a time traveler doesn’t even qualify as circumstantial evidence. It also bears repeating, how was Amaya not detected by Gideon?!

Amaya’s infiltration more or less serves as a convenient excuse to create an ‘adrenal response’ that activates new powers in Nate, effectively giving him the ability to turn his skin to a steel-like metal, which is how he manages to subdue Amaya. This completes Nate’s transformation into Captain/Citizen Steel, like his counterpart from DC Comics lore (he even humourously brings up the ‘Citizen Steel’ name as a joke when thinking of what to call himself), though he settles for going by, simply, ‘Steel’. This is weird though, since there’s an entirely separate DC superhero named ‘Steel’. Hell, the company that the usual Steel is affiliated with, Amertek Industries, has already been featured more than once on Arrow! There’s obviously no guarantee that John Henry Irons will ever show up in the DC Television Universe, but if the Arrow or Legends of Tomorrow showrunners ever want to bring in Steel, Nate is probably going to have to modify his name.

Whatever the case, Nate decides to test out his new abilities with Ray, leading to a mishap where they, like idiots, rip a hole in the ship’s hull that has Nate tumbling out into the time stream. Ray flies after him in his Atom suit, though the team is unable to follow, merely using Gideon to detect that the two have landed in 17th Century Japan, during the Edo Period. Nate is rescued by a kindly young woman named Masako, though Ray isn’t so lucky, as he’s captured and tortured by villainous samurai, with their leader, real-life Japanese historical figure, Tokugawa Iemitsu, stealing his Atom suit. This leaves Ray unarmed and with no means of escape, while Nate learns that Masako is set to marry Iemitsu, despite knowing that he’s a brutal warlord with a tendency to kill his wives.

The episode starts to become more entertaining when the Waverider actually lands in the time period, with Sara, Amaya and Mick leaving to try and get their allies back. This puts Sara’s abilities to particularly good use, and the revelation that Mick is a fan of Japanese movies and culture is actually pretty amusing, especially when he becomes focused on proving the existence of ninjas. Amaya also starts to finally become a more endearing ally this week, and the episode wisely builds on the jab at Ray she made last week, about Ray’s so-called heroism being limited to the Atom suit that he built, the suit that he has now lost.

At this point, Ray and Nate are the two most vulnerable members of the team, and the episode had a good hook in exploring that. Both are left questioning the notion of their budding heroism, as Ray is rescued by his allies, but is forced to abandon his suit, while Nate tries to defend Masako from some samurai, only to get a beat down when his powers don’t activate on command. Both men are forced to question their ideals and worth to the team, though at the very least, Nate’s hemophilia is cured by the serum, even as his powers refuse to activate again. The dialogue shared between the two was especially impactful this week, particularly as Nate grows impatient with Ray trying to ‘train’ him, before Ray gets frustrated and declares that he’s struggling with the idea of destroying not only something he sunk billions of dollars and countless hours into, but destroying his sole justification for being a superhero. 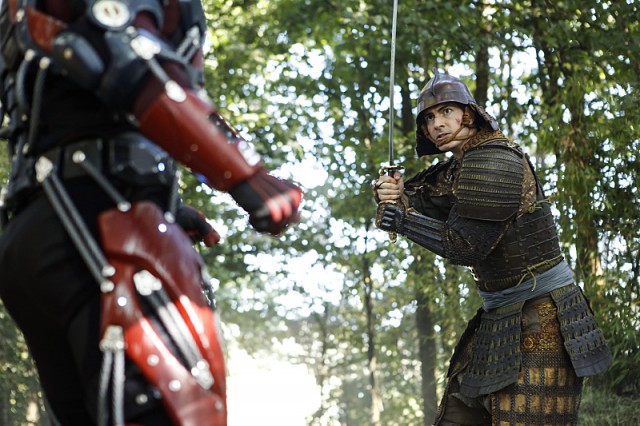 It was also good of the show to provide a worthy climax, which was not only fun and action-packed to watch, but also followed through with Nate having to destroy the suit. Nate’s powers activating at just the right time feels a little context-convenient, and the show might want to better establish some rules for how Nate’s metallic skin can turn on and off, but at least the moment of Nate destroying the Atom suit and the villain was a great one. It was also a neat twist to have Masako turn out to be the ancestor of Maseo Yamashiro, a.k.a. the husband of Katana, a heroine that should be recognizable from Season Three of Arrow most notably. If you remember, Katana was even featured as one of the titular heroes in this past August’s big screen DC movie, Suicide Squad as well.

A remaining subplot had Jefferson and Martin trying to repair the rest of the Waverider, somehow doing a better-than-expected job with minimal tools, even if this feels like a convenient excuse by the show to sweep away the ship’s damage from the past few episodes. Regardless, Gideon declaring that there are 36 compartments on the ship, not 35, leads to the two snooping for a hidden compartment, and eventually discovering one. They somehow break past the sequencing lock, and within the secret compartment, find a message from Barry Allen, The Flash himself, from 2056, far in their future. The message is for Rip, who was instructed not to tell the rest of his team about the contents, which are now known by Jefferson and Martin. Jefferson and Martin decide to keep the contents a secret once again, though we don’t yet know what the message detailed. Could this be Barry coming to realize that the consequences of his meddling with time at the start of this season of The Flash is what led to Reverse Flash disrupting multiple facets of history? I guess we’ll just have to wait and see.

It was more or less business as usual for Legends of Tomorrow this week, which might disappoint some, but the show was bound to have to take a breather eventually, given the huge bang that this season started with. “Shogun” did its job, providing especially satisfying story arcs for Ray and Nate, and the destruction of the Atom suit will certainly leave Ray in a very interesting position going forward. Ray could eventually rebuild the suit, since he presumably kept blueprints hidden somewhere, but could this be an opportunity to reinvent his role as The Atom? It looks like the dynamic of the team is ever so slightly shifting, and as the Legends move to another time period next week, we’ll have to see how those shifts continue to unfold.

Legends of Tomorrow 2.3: "Shogun" Review
Legends of Tomorrow slowed down and went back to its usual dynamic this week, as a mishap with the team finds them fighting through feudal Japan.
THE GOOD STUFF
THE NOT-SO-GOOD STUFF
2016-10-28
80%Overall Score
Reader Rating: (0 Votes)
0%