My hands-on session ended up being limited to testing out the compilation’s all-new adventure, Kingdom Hearts 0.2: Birth by Sleep ~A Fragmentary Passage~, which functions as a direct sequel to the series’ prequel offering, Kingdom Hearts: Birth by Sleep. I have played through the entirety of the other core Kingdom Hearts offering in Kingdom Hearts HD 2.8: Final Chapter Prologue however, that being Kingdom Hearts: Dream Drop Distance, back when it initially released on Nintendo 3DS in 2012. Thus, I and other Kingdom Hearts veterans already know what to expect from that established title, beyond the expected PlayStation 4 upgrades such as a visual boost to native 1080p HD resolution and 60fps performance, along with the addition of trophies to earn.

For those unfamiliar with Kingdom Hearts: Dream Drop Distance, which serves as the bulk of Kingdom Hearts HD 2.8: Final Chapter Prologue’s gameplay offering, it’s currently the series’ most recent mainline adventure, and the one that also takes place at the furthest current point of the Kingdom Hearts series’ story timeline. The game features two of the series’ familiar leads as player characters, Sora and Riku, who undertake separate adventures across a series of Disney-themed worlds both recognizable and new. Along with original returning worlds like Traverse Town and The World That Never Was, Kingdom Hearts: Dream Drop Distance also includes Disney-themed realms such as The Grid from Tron: Legacy, La Cite des Cloches from The Hunchback of Notre Dame, and Country of the Musketeers from The Three Musketeers. Gameplay periodically switches between Sora and Riku automatically, who pursue their own unique narratives across the same locations. Beyond that hook however, the game follows through with the series’ typical action-RPG conventions, primarily having the goal of moving between worlds, leveling up your skills, battling the series’ trademark monsters, The Heartless, and proceeding the plot.

Square Enix has previously promised that a technical upgrade to native 1080p/60fps and the addition of trophies won’t be the only revisions made to Kingdom Hearts: Dream Drop Distance in this upcoming PlayStation 4 build either. Seeing as the game’s original 2012 release was built around the Nintendo 3DS, several changes had to be made for the move to PlayStation 4, namely the 3D effect and dual screens obviously no longer being present, along with a need to tweak the controls to no longer rely on the 3DS’s unique hardware in certain segments. Minigames that formerly made use of the 3DS’s dual-screen, touch-enabled design will instead rely on an all-new card-based system that utilizes the usual button and stick controls on the PlayStation 4’s standard Dual Shock 4 controller, plus any touch inputs from the 3DS build in general will instead make use of the Dual Shock 4’s regular buttons in this compilation. Finally, another major tweak is that enemies will be less aggressive in the PlayStation 4 build of Kingdom Hearts: Dream Drop Distance, likely making it a tad easier than the previous 3DS build, even on higher difficulties.

Kingdom Hearts 0.2: Birth by Sleep ~A Fragmentary Passage~ meanwhile is a shorter adventure, said to span the approximate length of a single world’s main progression in your average Kingdom Hearts game, though the advantage to this is that you immediately start out with a slew of high-powered abilities. This all-new mini-adventure places you in control of Aqua, one of the three playable Keyblade Masters from Kingdom Hearts: Birth by Sleep, who is lost in the Realm of Darkness in the wake of that game’s events. This demo involved Aqua looking for mysterious clockwork-like spheres to strike with her Keyblade, with five of these hidden orbs eventually rebuilding the path to a mysterious castle when they’re all found and struck.

Naturally, the Kingdom Hearts series has never looked better than it does here. The native 1080p HD resolution adds an extra sense of polish and slickness to the already colourful, eye-popping visual design, and the extra smooth 60fps performance makes the series’ action-based battles against The Heartless feel smoother and more satisfying than they’ve ever been! This PlayStation 4 compilation represents the first time that a Kingdom Hearts game has run at a full 60fps clip too, where all of the prior installments ran at 30fps, and that seems to be the primary way that this new package is attempting to leverage the upgrade to a current-gen console. The compilation’s cutscenes still seem to render at a mere 30fps, or at least they seemed to in this mini-adventure, though that’s not too big of a deal, since the gameplay makes full use of the performance upgrade to accentuate the power of both Aqua and her enemies!

The visual design of the World of Darkness is also quite striking, as was the fun, yet ethereal music score that played in the background. The surreal, seemingly time-stopped imagery has you leaping and swinging your way through a series of displaced brick roads, teetering mid-air towers, and a whole lot of stopped motion effects. There’s a dream-like quality to the game that suits Kingdom Hearts sensibilities very well, especially when, as I said, Aqua already has all of her high-level abilities unlocked from the start. That means you can jump extra high, dash through the air, and generally move with a potent sense of maneuverability, which only feels better when you have the 60fps upgrade that the series hasn’t boasted before now. The clockwork orbs didn’t prove too difficult to find with some quick navigation, though they were hidden just well enough to make it feel satisfying to move through this mysterious place, and see what you can discover around some cleverly hidden corners.

Battles proved to be quite fun and zippy as well. Aqua can wield high-level elemental and curative magic, and while enemies hit quite hard, they never felt unfair or difficult to manage. As with prior Kingdom Hearts games on PlayStation platforms, you can select between fighting, using magic or using items by using the Directional Buttons, execute your chosen command with the X Button, use the Square Button to guard with your Keyblade, use the Triangle Button to perform certain special moves when they appear, and use the Circle Button to jump. With Aqua already being fast and powerful in this mini-adventure, many of the simple Heartless foes could be taken out with a few presses of the X Button, whereupon Aqua quickly and easily cut through her enemies with stylish Keyblade combos.

There is more to combat than simply swinging your Keyblade and occasionally healing Aqua however. While Aqua’s offensive magic had limited uses during this demo, attacking enough enemies did manage to activate her special Spellweaver form, which can be activated with a quick press of the Triangle Button when it’s fully charged up. Activating Spellweaver temporarily makes Aqua even faster and stronger, and as it powers down, you can also use the shoulder buttons to unleash a devastating light-shooting spin attack that allows Aqua to ravage her foes like a sacred twister. You have to earn your potential as a Keyblade Master in Kingdom Hearts: Dream Drop Distance, but Kingdom Hearts 0.2: ~A Fragmentary Passage~ is a great way for the impatient to dive in and start playing with a maximized character early!

The only serious obstacle I encountered within the demo was a boss enemy at the end, a tentacle-like beast that was formed by a whole legion of regular Shadows, the most basic and iconic of Heartless enemies in the series. The boss had several HP bars to deplete, and would regularly bob in and out of the ground, often aggressively smacking, grabbing and tossing Aqua unexpectedly! It was a tricky enemy that required some wits and agility, and unlike the regular Heartless peons, you have to choose your attack opportunities carefully when engaging this foe. I did have to quickly heal Aqua a few times to avoid defeat, though fortunately, it was easy to keep her MP high, meaning that casting Curaga in a pinch to completely restore Aqua’s HP was never difficult. After an exciting few minutes, a final Spellweaver strike from Aqua destroyed the boss and had me on my way to the castle that I’d built a path to. After a story cutscene followed that I’d be remiss to spoil, this is where the demo concluded. 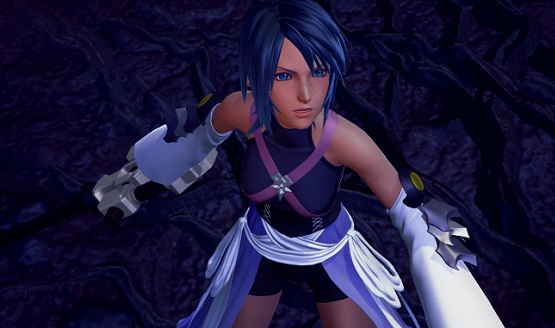