Plenty of superb movies in recent years have scripts that originated on the Hollywood Black List, an annual rundown of unproduced screenplays that are seen as the most promising by pundits. It’s a useful tool to help draw positive attention to two things; One, that Hollywood has actually not run out of original ideas, contrary to popular belief, and two, it highlights riskier movie pitches that studios should consider taking a chance on, to avoid having a high-profile movie portfolio that is entirely filled with remakes, sequels and adaptations.

The list is fairly lengthy on any given year, but if you keep up with it, you may recall that the 2009 roster included True Memoirs of an International Assassin, an original comedy pitch that involved an ineffectual everyman’s fictional novel being published as a non-fiction memoir, which leads to the sheltered man being forced to adopt the ingenuity and love of risk seen in his fictional assassin protagonist. It sounds like something with a lot of comedic promise, and after Netflix acquired the project, they even seemed to recognize this as well, as this movie received quite a bit of promotion, probably more than most other Netflix Original Films that released this year.

Kevin James stars as Sam Larson, a struggling writer who hears about a legendary assassin called, “The Ghost” from his buddy, Amos, played by Ron Rifkin, and decides to steal the idea for the novel he can’t quite finish. Karma of course catches up to Sam when a zealous, forward-thinking publisher/publicist, Kylie Applebaum, played by Kelen Coleman, publishes his book in the non-fiction section in an effort to boost sales. This eventually ends with Sam being mistaken for the real-life Ghost, and kidnapped by Venezuelan extremists that try to force him to upset the country’s political foundation by killing the president.

This is merely the start of a whole series of events that has Sam’s lie gradually biting him in the ass more and more with every passing scene. Immediately though, one of the things that heavily deflates the movie’s stakes is Kevin James as the lead character. In fairness, I don’t dislike Kevin James as a comedian, since he can be funny with the right material, and especially when he leaves his fellow Happy Madison stooges outside of the production, as is mercifully done here. The problem however is that there’s no conceivable way that Kevin James could ever be mistaken for a legendary assassin. Even if he doesn’t look the part, which may be convincing in itself, he’s obviously far too inept, panicky and ignorant to feel in any way credible as The Ghost. It’s the same problem as Pixels trying to pass him off as the President of the United States last year! Rather than being funny, this joke is just immediately strained to breaking point, and makes every antagonist in the movie come off as an oblivious moron.

One of the better ideas in the script with the movie’s villains is that there’s actually several of them, and none of them ever becomes a central villain. Something that does decently elevate the comedic stakes is that Sam is continually passed around between several warring factions of Venezuela, all of which want to assassinate someone from another faction. Outside of the original extremist camp led by Andy Garcia’s El Toro, this includes the president, played by Kim Coates, and an enterprising Russian drug lord named Anton Masovich, played by Andrew Howard. These villains could have been fun, but the fact that they all come off far too stupid in believing that Sam is The Ghost when he’s obviously not, is something that hurts their appeal, even in a comedy. Garcia, Coates and Howard all do their best to give their antagonists some memorable quirks, but they’re also tripped up by direction that feels rather off, and I’ll get to that in the appropriate paragraph.

Oh, and it certainly wouldn’t be a Kevin James movie if he didn’t have a laughably unrealistic hot love interest, and don’t you worry, True Memoirs of an International Assassin is packing one of those as well. Zulay Henao portrays cold, but sexy DEA agent, Rosa Bolivar, who decides to take Sam into her protection, and obviously eventually finds him charming because the plot says so. Henao also makes a valiant effort to make her character interesting, and she does manage to own most of the small handful of decently cool moments in the movie’s stilted action, but the attempts to give her depth beyond being a DEA badass all fall incredibly flat. Again, some of this is the awkward direction, but whenever the movie tries to be sincere with Rosa’s character, it always feels hollow and false, making Rosa feel like a tiresome cliche, rather than a truly appealing supporting presence. 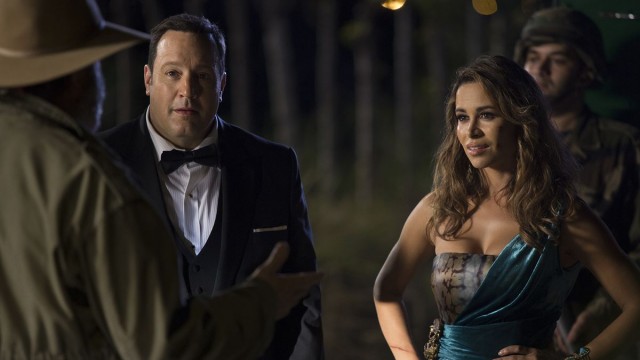 There’s also a couple of obnoxious CIA agents tossed into the mix, Cobb and Cleveland, played by Rob Riggle and Leonard Earl Howze, respectively, but their place in the plot is completely tacked-on, and their characters don’t add anything beyond stretching out the scant runtime of this movie. Like Kevin James himself, none of these personalities are adding anything truly new or interesting to the mix. Even James is playing a character that you’ve seen him play about twenty times beforehand, and this all leads to a mostly wasted cast that is disappointingly bland and under-utilized.

The fundamental concept behind True Memoirs of an International Assassin is so promising. Why then does the final product feel so cliched and dull? The makings of a very effective dark comedy sadly give way to a storyline that is far too milquetoast and boilerplate to truly care about. This is especially problematic when one recalls that this is a Netflix Original Film, and isn’t subject to the MPAA scrutinizing it at all. Why not go nuts and make a movie that is more memorable and biting then? Instead, this movie doesn’t even have so much as an f-bomb in it. Why?!

There are so many interesting and potentially funny ideas in True Memoirs of an International Assassin that are just never allowed to truly gel, with a strange lack of inspiration throughout it all. Where it could have been envelope-pushing, the movie shies away from actually rocking the boat, which is a truly fatal mistake in a movie that’s supposed to be about a very real political unrest in a very real South American nation. This makes the movie come off as lazy and cowardly, which probably explains a huge part of why critics ripped it apart so much.

Again, the story is not without heart. Even if we’ve seen this kind of theme a million times before in various other movies, at least the message of self-acceptance and motivation in life is not a bad one. It’s an easy one, but not a bad one. As I said though, heart isn’t enough to make a truly effective comedy. You need to be smart, and you need to have the courage to offer points of view and satire, without worrying about upsetting people. Instead, True Memoirs of an International Assassin simply strings itself along on a series of increasingly ludicrous scenarios, becoming more detached from reality and inspiration with each passing minute.

Jeff Wadlow helms True Memoirs of an International Assassin, after most recently directing 2013’s Kick-Ass 2, and unfortunately, his direction is a big part of what’s wrong with this movie. Every so often, there will be a decent action scene or a decent joke, but for the most part, Wadlow seems to be phoning in a huge chunk of the movie’s oversight. This leads to a lot of awkward action scenes that feel stilted and cheap-looking, a lot of dialogue that feels off and weirdly-delivered, and most noticeable of all, a handful of really ill-advised dramatic scenes that don’t elicit a shred of emotion.

This feels like one of those movies that was directed from a great distance, with minimal input, and not much in the way of real passion. Maybe Wadlow did attempt passion in some places with this movie, but if he did, it really didn’t translate to the final product. To his credit, Kevin James is at least doing his best, and trying to make a good, entertaining movie, but it feels like even he wasn’t given much direction to work with in many scenes. This has True Memoirs of an International Assassin ultimately feeling very limp and uninteresting, never managing to sell its stakes or its jokes, and this leads to this assassin-themed flick ending up rather unceremoniously dead-on-arrival.

It’s likely damning with faint praise to say that True Memoirs of an International Assassin is at least better than Happy Madison’s duo of Netflix contributions so far, those being the aggressively mediocre The Do-Over and the unforgivably horrendous The Ridiculous 6, but it seems that, even when James breaks away from Happy Madison for a solo project, it doesn’t turn out that much better in this case. True Memoirs of an International Assassin is carried almost completely by Kevin James, relying on his usual schtick of being a pathetic everyman who wants to make something of himself, so if you’re a fan of James, you might have fun with this movie. Everyone else however  won’t find much here of actual merit.

Netflix has had a very spotty catalogue of original films in 2016, and True Memoirs of an International Assassin is sadly not something that is going to elevate it. The concept had a lot of potential, but somewhere along the line, the final product didn’t care about living up to it. Whether it’s the faulty direction, the many half-hearted performances or the just plain fumbled execution, True Memoirs of an International Assassin ultimately disappoints, and isn’t worth the time of most viewers. While many Black List entries do lead to truly great movies, this is one screenplay that was perhaps better left on the shelf.

True Memoirs of an International Assassin Review
True Memoirs of an International Asssassin is ultimately a frustrating waste of its great concept, being a milquetoast, mostly unfunny comedy that does nothing to stand out.
CHARACTERS60%
PLOT55%
DIRECTION45%
THE GOOD STUFF
THE NOT-SO-GOOD STUFF
2016-11-26
53%Overall Score
Reader Rating: (0 Votes)
0%