Hideo Kojima received a high honour at tonight’s The Game Awards, being commended with the ‘Industry Icon’ award, after an emotional speech from the show’s host and Kojima’s real-life friend, Geoff Keighley. For those who don’t recall, Kojima’s former employer, Konami prevented Kojima from attending The Game Awards last year, to accept the award for ‘Best Action/Adventure Game’, which Kojima’s final title under Konami, Metal Gear Solid V: The Phantom Pain, had won.

After a brief acceptance speech, Kojima had a gift for the audience attending the show, as well as those watching online from home. This gift turned out to be an all-new pre-rendered FMV trailer for Kojima’s first independently-developed game, Death Stranding, which is set to be published by Sony as a console exclusive on PlayStation 4. 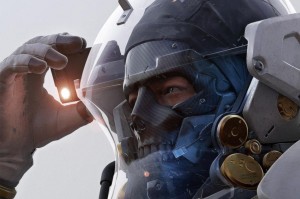 The new trailer showed a mysterious man carrying a baby within a capsule, avoiding the watchful eye of soldiers in a ruined, futuristic-looking city, seemingly polluted by oppressive black liquid. The man turned to face the camera eventually, and was revealed to be none other than Hollywood director, Guillermo del Toro, who was later confirmed to be playing an unknown character role in Death Stranding. Del Toro previously attempted to work with Kojima and Death Stranding star, Norman Reedus under Konami, where he would have helped direct the cancelled Silent Hills. Del Toro wasn’t the only new face confirmed for Death Stranding either, as a peek into a sewer shows that the antagonistic soldiers appear to be led by a character portrayed by Doctor Strange and Rogue One: A Star Wars Story star, Mads Mikkelsen! This marks three recognizable Hollywood names currently attached to Death Stranding, which sure looks to be honouring Hideo Kojima’s avid love of cinema very nicely.

Little is known about Death Stranding’s story or gameplay at this point, though Kojima has pledged to release Death Stranding before 2019. For now though, keep linking to Eggplante for all major news and updates on Death Stranding, and other Hideo Kojima projects.