Tonight on Twitter, Netherrealm Studios boss, Ed Boon tweeted a cryptic image appearing to suggest that Netherrealm’s upcoming DC Comics-themed fighter sequel, Injustice 2 would release on May 16th of this year. Shortly after, a representative of publisher, Warner Bros. Interactive confirmed that the date announcement is accurate, and Injustice 2 will officially release to the public on May 16th, 2017. 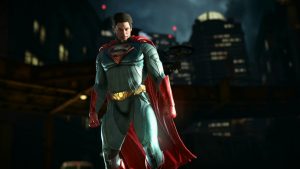 A follow-up to 2013’s hugely successful Injustice: Gods Among Us, Injustice 2 once again brings various DC Universe heroes and villains into conflict with one another, utilizing one-on-one combat. The game’s story will directly follow the events of its predecessor, exploring the defeat of the corrupt Superman from a parallel Earth. While said parallel Earth’s survivors start to piece the world back together in the wake of Superman’s defeat, led by the alternate version of Batman, a new threat emerges that will once again force the DC Universe’s finest to band together and save their Earth.

Along with returning fighters such as Superman, Batman, Aquaman, Wonder Woman and Harley Quinn, Injustice 2 is also set to debut several all-new DC personalities amid its roster of fighters. Early gameplay trailers have shown DC heroine, Supergirl among the new playable fighters, along with recognizable DC villains such as Gorilla Grodd, Atrocitus and Deadshot. Naturally however, most of the game’s playable fighters remain a mystery at this point.

Injustice 2 is in development for PlayStation 4 and Xbox One.