Arrow’s major midseason finale cliffhanger immediately kicked off this week’s midseason premiere, “Who Are You?”, a title that feels apt, as Laurel has apparently returned from the dead! Somewhat predictably though, not all is as it seems with this supposed miracle, leading to a pretty exciting midseason premiere for Arrow overall, albeit one that builds on events to come later over providing real resolution to anything ongoing at the moment.

In case you didn’t put it together, the Laurel that Oliver encountered in the Arrow Cave is in fact, a fake Laurel. That’s not much of a shock. This Laurel is apparently the evil Earth-Two version of Laurel, Black Siren, whom you may remember from late last season on The Flash. Apparently, Prometheus broke into S.T.A.R. Labs, without any of Team Flash knowing (man, Cisco’s security safeguards really do suck!), and sprang Black Siren to play more head games with Oliver. 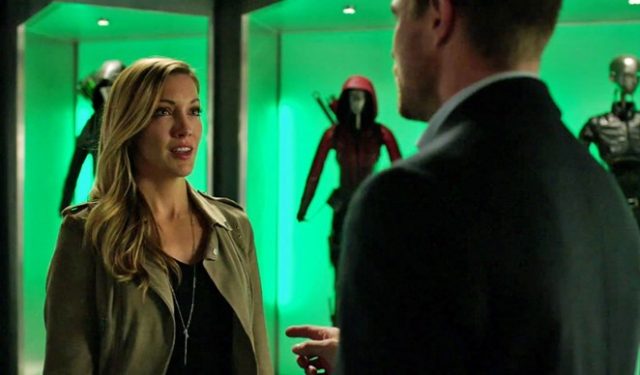 It’s not long before Black Siren’s identity is outed to Team Arrow, which mostly leads to some exciting (and destructive!) action scenes, along with Felicity breaking rank and trying to manage Black Siren herself, against Oliver’s orders. Rather than be annoying though, Felicity’s actions feel justifiable, in the sense that she knows Oliver better than anyone else, and can blatantly see that Oliver’s judgment is clouded. The reference to Oliver wanting to ‘save’ Laurel through redeeming Black Siren was very interesting too, and did lead into a pretty promising development towards the end of the episode.

That said though, Black Siren feigning duress and pretending that Prometheus is forcing her to do bad things is a very obvious lie. Black Siren’s character is never truly believable as another victim of Prometheus, which further makes Felicity’s actions in apprehending her, and later letting her out to allow her to lead the team to Prometheus, feel all the more justifiable. Naturally, Prometheus gets away again, but Oliver keeping Black Siren at a close cell within A.R.G.U.S. after the climax does at least leave the door open for Katie Cassidy to keep making welcome guest appearances on this show, and possibly even The Flash and Legends of Tomorrow. 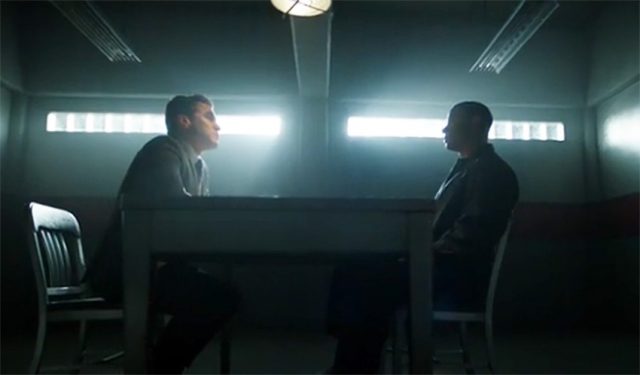 Even if there isn’t much real resolution with Black Siren’s character or Oliver’s continued angst over Laurel’s death at this point, the episode ending with Oliver finally resolving to train a Black Canary successor is very exciting. We even get a peek as to who it might be as well, with a quick shift to Hub City, where a bar patron gets pretty fed up with two thugs harassing a waitress. Turns out, the woman has the same sonic-screaming abilities as Black Siren, and uses them to lay these two goons out right as the episode ends! Looks like we already know who the next Black Canary is going to be, but considering that Dinah Laurel Lance is the one and only Black Canary of modern DC Comics lore, it begs the question of who this mystery woman will be identified as. Will be an all-new character invented specifically for Arrow? Another possibility is that they could make her Dinah Drake, the Golden Age forerunner to Black Canary as we know her from DC lore, especially since this woman having the same first name and abilities as Laurel would make for a great sign for Oliver and co. to recruit her fast.

Whatever the case, we do get a couple of subplots in this episode that go beyond the Black Siren business, even if they also largely feel like they’re just setting up for future episodes. We get something of an interplay between Curtis and Rene in one such subplot, with Curtis still reeling after his husband left him during the events of the midseason finale last month. Rene being an unlikely ally and outlet of emotional support to Curtis did prove satisfying, especially since you wouldn’t expect Rene to ever be emotionally sensitive. Still, Rene’s more blatant strength rubbing off on Curtis did allow him to save the day by disabling Black Siren’s abilities long enough for her to be apprehended in the climax, allowing Curtis to find his resolve to be Mister Terrific again, after he deliberates hanging up his mask, very briefly.

Diggle is also the subject of another subplot, as Oliver begs Adrian Chase to represent him, knowing that Diggle is at the mercy of corrupt military forces who want him dead. Chase begrudgingly takes on the job, and soon sees that Oliver is telling the truth, though finds himself helpless to stop the military. Fortunately, after some clever thinking, Chase gets Diggle transferred to his jurisdiction’s custody at Starling County, since he convinces Diggle to hit him, constituting the secondary crime of Diggle being charged with assaulting a public official. This prolongs Diggle’s death sentence, and keeps him out of danger for now, but is Diggle truly safe yet?

As for the flashback sequences, they were once again disappointingly uninteresting, mostly consisting of Oliver getting knocked around by the turncoat Bratva agent, and schooled about thinking he could take on the Bratva or Kovar, over a woman no less. It wasn’t until the very end of the flashbacks that they became more exciting, though the final turn of the episode, which sees a mysterious archer take out every single thug keeping Oliver captive, will have DC fans especially excited! Turns out, the mystery archer is none other than Talia Al Ghul, the other, more well-known daughter of Ra’s Al Ghul, who, in DC Comics lore, is both an adversary and lover to Batman. Batman seemingly doesn’t exist in The CW’s DC Television Universe, granted, but considering how that never seemed to stand in the way of Ra’s Al Ghul being a big villainous presence on this show, here’s hoping that even more can be done with the presence of Talia in the flashbacks, or potentially even the present-day events!

Arrow may have slowed just a tad after the hot streak it really started to build towards the end of Season Five’s front half in 2016, but this week’s midseason premiere still mostly kept the excitement going, while laying some solid ground work for what to expect in the season’s back half in 2017. Black Siren’s story development didn’t really go anywhere interesting for now, but Oliver finally resolving to train a new Black Canary successor is undeniably good news for Team Arrow, now that they’re short-handed following Artemis’ betrayal. It was also cool to see Talia Al Ghul make quite an entrance in some otherwise dull flashbacks, which should hopefully give Oliver’s history with the Bratva a welcome shot in the arm. Fortunately, the continued suspense of Prometheus’ agenda and Diggle managing to cheat death for the time being still gives us plenty of intrigue to look forward to in the short term.

Arrow 5.10: "Who Are You?" Review
Arrow delivered a pretty good midseason premiere this week, as Oliver is haunted by the memory of Laurel, and Diggle comes to depend on a new ally.
THE GOOD STUFF
THE NOT-SO-GOOD STUFF
2017-01-26
80%Overall Score
Reader Rating: (0 Votes)
0%