Legion dispensed with the playfulness pretty much entirely in this week’s extra intense episode. The show went extra dark and twisted in, “Chapter 5” this week, which started properly unleashing David’s powers in a very dangerous manner, while also showing a bit more of the true power of his mysterious tormentor, with more mysteries about this strange mental parasite also being revealed in this episode.

The beginning of the episode has David coming back from the Astral Plane to recount his experience meeting Oliver to Melanie. Melanie is predictably pleased that David can likely bring her husband back after 21 years stuck in the Astral Plane, though even more exciting for David is inspiration in how to finally be physically intimate with Syd. Using his powers, David brings Syd to a mentally-powered location called the, “White Room”, where they can have sex as much as they want, and perfectly perceive it as if it were real. 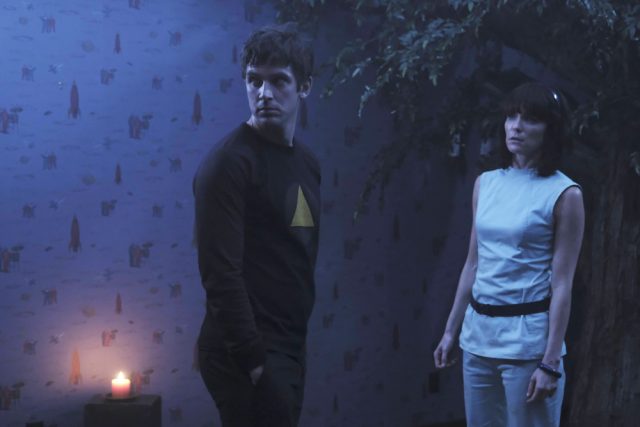 This is a great testament to how David’s abilities don’t necessarily have to be destructive. Using his powers to bolster his relationship with Syd, while simultaneously also making Syd feel better about the limitations of her own mutant abilities, was a beautiful and heartwarming moment in an otherwise dark, horrifying episode of Legion. Syd recounting the story of losing her virginity was also effectively twisted, as she confesses that she used her powers to turn into her mother and have sex with her mother’s boyfriend, only to revert back to her 16-year-old self mid-coitus. That had to have been pretty intense for everyone involved!

Obviously though, this precious moment can’t last, as David’s tormentor starts prodding at him to go rescue Amy from Division Three. Melanie is obviously against the idea, despite Syd volunteering to go along, though this point quickly becomes moot, as David sneaks off without everyone. After some debate, this has Melanie rallying the other Summerland mutants to get David back, though they’re too late, and arrive only to discover the aftermath of what David has done in the name of rescuing his sister.

This is where the episode really started to get intense, in a fantastic way. Discovering the aftermath of David’s powers, rather than seeing them in action, was a very effective way to leave the true horror of David’s dark potential to viewers’ imaginations, while still getting a good sense of just how dangerous a mutant he truly is. It also caps off with Amy’s captor revealing that he saw what is truly behind David’s actions, something that Melanie’s crew also glimpses on the security footage, revealed by night vision. The warning that the tormentor, “Wears a human face” is something that presents a lot of promise, since this mental monstrosity could technically be anyone at any time.

It’s also revealed beyond a shadow of a doubt in this episode that this parasite can truly become whatever and whoever it wants. Apparently, it has been posing as both Lenny and her male counterpart, Benny at the same time, modifying the memories and perceptions of whoever sees it to keep masking its presence. Even in the physical world, this mysterious tormentor has never been far from David, and when it motivates him to bring Amy to the childhood Haller house, in order to hear the dark secret about David’s life, Amy spills the beans; David is adopted. For casual viewers, this might be a bit of a twist, though obviously, if you’re a Marvel fan, and particularly an X-Men fan, then the twist is somewhat deflated. As I’ve mentioned in several Legion reviews already, David is the illegitimate son of X-Men leader, Professor Charles Xavier, something that the show is continuing to gradually lay the groundwork for, even though the showrunners seem to be indicating that we won’t be acknowledging Xavier directly this season at least. 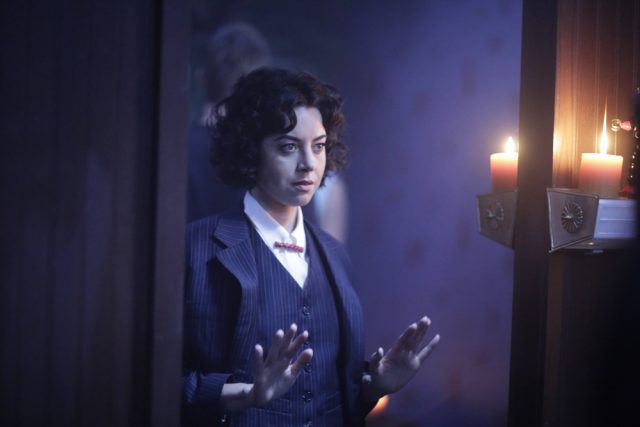 Melanie’s party tracking David to the old Haller house, and them being tracked in turn by The Eye, made for a pretty effective and creepy climax that really allowed Aubrey Plaza to chew scenery as the show’s shadowy villain. After the parasite disables the sound and prevents Melanie’s team from effectively communicating, the group splits up and eventually finds David, with David pulling Syd into the White Room, right as one of the possessed Summerland mutants opens fire on Syd! Unfortunately, this doesn’t save Syd from the tormentor, as it corners her on the bed, with David helpless to save her. One moment later, Syd then wakes up in a therapy session, overseen by Lenny. Again, it seems pretty evident that this is another trick, but given the nature of this crazy, surreal show, who knows what’s going to be revealed in the weeks to come, as the episode ends with Syd, David and the other Summerland folks seemingly all at ‘Lenny’s’ mercy.

The latest revelation about David’s past won’t surprise Marvel/X-Men enthusiasts, but, “Chapter 5” was still another home run for Legion, effectively dispensing with the pleasantries and leaning hard into the show’s dark side. Even after the sheer horror witnessed at the Division Three facility, it feels like we’re only getting a slight taste of what both David and his mysterious tormentor are capable of. Fortunately, there were still enough bright moments to balance things out too, whether it was David and Syd finally getting the chance to have sex, or Cary and Kerry engaging in some verbal ribbing as Kerry makes her recovery. Kerry getting shot at the end of last week’s episode didn’t end up being that big of a deal in the end, though considering the destructive potential of a freshly unhinged David, perhaps Summerland could use a lucky break.

Legion 1.5: "Chapter 5" Review
Legion went darker than ever in this week's episode, to sublimely chilling effect, as we get a greater taste of the kind of destruction that David is truly capable of.
THE GOOD STUFF
THE NOT-SO-GOOD STUFF
2017-03-09
93%Overall Score
Reader Rating: (0 Votes)
0%