The rush to the final missing piece of the Spear of Destiny is on in this week’s episode of Legends of Tomorrow, as the team goes to 1970, right during the launch of Apollo 13. “Moonshot” detailed where the final missing JSA member ended up, namely Henry Heywood/Commander Steel, as he takes a job at NASA and works his way up, in order to hide his piece of the Spear in a most unexpected place!

Yes, Henry had the bright idea to hide his Spear piece within Neil Armstrong’s flag planted on the moon, but even that isn’t stopping Eobard Thawne from going to retrieve it. With Thawne disguising himself as one of the astronauts on Apollo 13, now with history changed to avoid its infamous oxygen tank explosion, the Legends have to find a way to beat Thawne to the Spear piece, while Martin, Jefferson and Mick stay on the ground, in order to run interference at NASA, so that the existence of the Legends and the Legion isn’t discovered by the world at large. 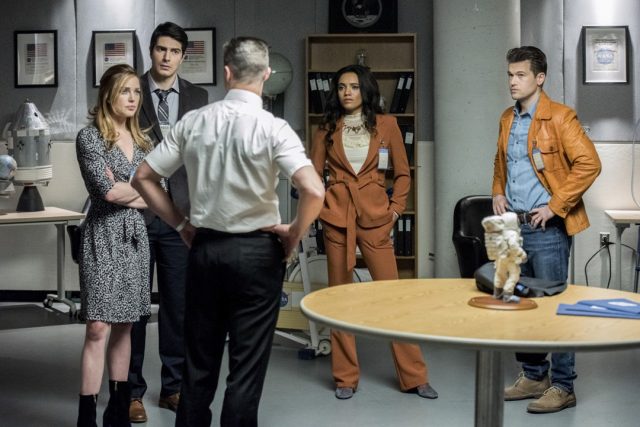 As expected, Legends of Tomorrow continued to soar with yet another standout episode here as well, once again blending fantastic superhero-themed fun with impeccable character work and drama. The zero-gravity environment disabling Thawne’s speedster abilities also nicely re-interpreted him as an enemy, particularly after Ray has to try and sneak onto the Apollo 13 craft, only to end up being caught by Thawne and having his suit damaged. Ray does manage to subdue Thawne, but at the cost of being unable to easily get back to the Waverider.

Meanwhile, on the Waverider proper, Rip is trying to adjust to his ship now being commanded by Sara, with the two eventually disagreeing on how to save the remaining astronauts from flying into a meteoroid cluster. Sara decides to use the Waverider as a shield, which saves the men and successfully gets their craft into the tractor beam, though also heavily damages the Waverider, to the point of even temporarily disabling Gideon. This has both Ray and most of the Legends being sitting ducks alongside Thawne while they all float in space, with Martin and Jefferson trying to hide their presence from the NASA onlookers, as Mick… Hangs around, I guess. Yeah, the show didn’t really do much with Mick this week, which was kind of a let-down, considering how much of a surprising asset he’s been to the Legends lately. 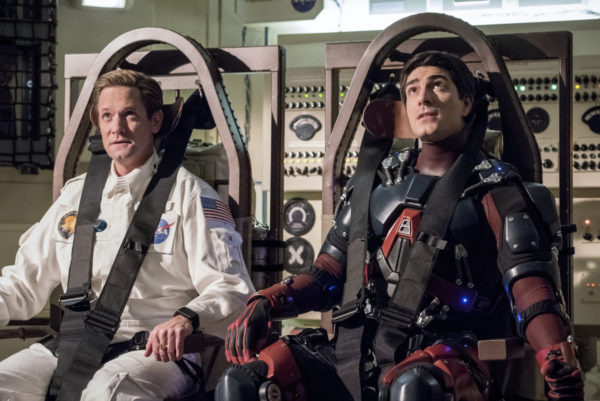 In any case, Ray being forced to work alongside Thawne to fix his drifting spacecraft, and retrieve the Spear piece, was one of the best moments of the episode. Now with their abilities disabled, and no means to truly screw over the other man, Ray and Thawne instead had to work together in a temporary truce as men of science. This was a surprisingly effective way to illustrate some of the common ground between Ray and Thawne, in turn showing how Thawne isn’t a blanket evil character, and has his own reasons for his actions, being an uncompromising researcher of the Speed Force. He’s still a villain, but the show managing to contrast Thawne’s desire for perfection with Ray’s selfishness in hogging Dwarfstar for his Atom Suit was really inspired and clever. There really isn’t that much separating Ray and Thawne when it comes to their psychologies, and that was made especially apparent when Thawne is forced to admit that his motivations for seeking the Spear are simply to evade the incessant coming of Black Flash to correct Thawne being a time aberration.

Even isolating Ray in a standout, nicely engaging story arc, the other Legends working with Martin and Jefferson on the ground also made for tons of great material. Martin having to sing, “Day-O” at the top of his lungs in the middle of Mission Control to divert the attention of the scientists from Jefferson cutting the camera feeds, as Mick awkwardly joins in, was gut-bustingly hilarious. Likewise, Sara proving her decisiveness and commanding ability to Rip made for a truly complete way to pass the torch, as the Legends find themselves under new leadership, despite Rip once again being a member of the team.

Even the smaller subplot with Nate and Henry was really well done, as Nate puts Henry up to the idea of returning to the 1950’s to be with his family, thinking that it will improve his unlikable father and childhood. Amaya pointing out that this will cause an aberration in the timeline, and that not Nate nor Henry can be so selfish with history, was a great bit of drama between Nate and Amaya, especially when Nate hints to Amaya that her return to her village will end in tragedy, as Ray told him during the events of last week’s episode. Henry eventually deciding to do the right thing and sacrifice his family was very heroic, even as Nate made a surprisingly good case to Amaya about not always placing history above personal motivations.

The episode’s climax was also excellent in pretty much every respect, as the team manages to capture Thawne and temporarily hold him in the brig, which helps them calculate the correct angle to return to Earth without burning up in the atmosphere. Ray putting his trust in Thawne, and having it pull through to save the team, was a superb way to bring the growth of both characters full circle, just as the Waverider must open the cargo door to correct the angle, which would mean someone has to sacrifice their life, and be sucked out into space. Obviously, Henry is way ahead of Nate, despite Nate insisting that his powers may prevent him from dying, but Henry’s mind is nonetheless made up. As Henry seals himself in the door, he tells Nate to give his father the message that he’s sorry he left, before opening the door and being sucked into oblivion. Henry’s sacrifice and Thawne’s knowledge coming together to save the Legends was a satisfying way to have the team put their egos aside to save the day, and the subsequent moment of Nate meeting his father as a child at NASA made for a very emotional way to close out the bulk of the episode’s events.

Other little touches like Sara comforting Rip as he comes to terms with no longer being captain, declaring him a Legend just the same, and Amaya going against Gideon’s wishes to learn about the destruction of her village in the future, along with who her granddaughter becomes in the present, also did well to close out this episode on a sustained high note. Once again, Legends of Tomorrow crushed it with its final rush for the remaining Spear piece, laying the remaining groundwork for the Legends’ big showdown against the Legion of Doom over this season’s remaining three episodes. “Moonshot” made for another remarkably creative, fun and emotionally gratifying trip to a new time period, and made up for some of the shortcomings of last week’s episode pretty exceptionally. Now that the Spear of Destiny can be reformed and fully kept away from the Legion, the Legends will have to make their final stand, even as we come to see that Thawne isn’t the moustache-twirling goon that we may have initially believed him to be.

Legends of Tomorrow 2.14: "Moonshot" Review
Legends of Tomorrow excelled with another especially superb episode this week, as the Legends and the Legion race into space for the final Spear piece.
THE GOOD STUFF
THE NOT-SO-GOOD STUFF
2017-03-15
93%Overall Score
Reader Rating: (0 Votes)
0%