Comic book geek and cult filmmaker, Kevin Smith has once again returned to the directors’ chair for this week’s episode of Supergirl, which continues to escalate the tension between the DEO forces and Mon-El’s parents. “Distant Sun” set off with a very promising initial concept, though one that it frustratingly didn’t see all the way through, as Kara starts becoming attacked by various alien bounty hunters, who desire a very expensive bounty that has recently been placed on Supergirl’s head!

Now that Kara and Mon-El have repaired their relationship in the wake of last week’s musical crossover, we got some better romantic storytelling this week, which was very welcome. Not only did Kara and Mon-El face a compelling new conflict to this effect, but Alex and Maggie also built towards some more solid development, as Alex learns some hard truths about Maggie’s past. Fortunately, she also did this without the two going through another forced break-up of their own as well. 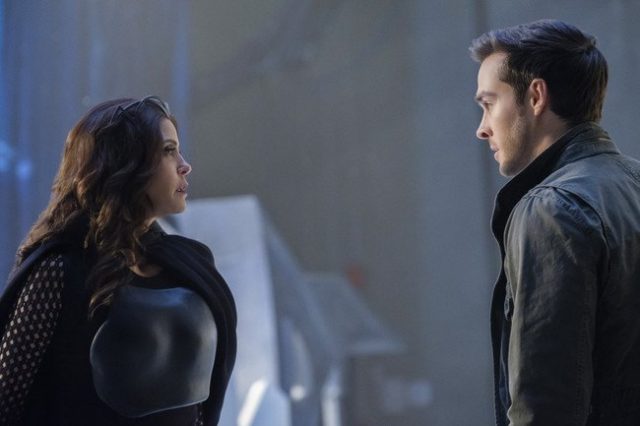 Regarding the core bounty hunter idea, which kicks off the episode with some solid action, it doesn’t take a genius to deduce who might be targeting Supergirl, and using every thug in the galaxy to try and take her down. Mon-El immediately suspects his parents, who have the animosity and resources to declare such a bounty, but President Marsdin nonetheless tells J’onn and the rest of the DEO to stand down, forbidding them from engaging the Daxamites. This leaves their hands tied, with Kara having no choice but to go into hiding, leaving all of National City temporarily vulnerable.

Again, this is such a cool concept for a core storyline in this episode, which is why it’s frustrating that it’s swept under the rug at barely the halfway point. When Kara finally talks Mon-El into confronting his mother about the bounty in the Fortress of Solitude (after his parents initially deny knowledge of it at the alien bar), Rhea finally comes clean about placing the bounty on Supergirl (Lar Gand had no knowledge of this), even going as far as to attack Kara with a Kryptonite dagger! Mon-El agrees to go with his mother to Daxam to spare Kara’s life, but this only has Kara stubbornly demanding to take the fight to the Daxamites on their ship, despite the president’s orders.

While this is going on, Alex meets an ex-girlfriend of Maggie’s, whom Maggie isn’t truly interested in catching up with, despite Alex urging her to do so. After the woman stands the two up at a dinner though, Alex goes to confront her, only to learn that the real reason for their break-up was that Maggie cheated on her. Alex in turn confronts Maggie about her lie, which forces Maggie to admit that she still has trouble admitting the truth and opening up to others, even Alex. This was a sweet little subplot that allowed Maggie to grow a bit and gain some closure from a past relationship, while also letting Alex be the romantic saviour for a change, even if it did feel a little disconnected from everything else that was going on with the Daxamites. Still, Maggie has spent a lot of time being the one emotionally in charge of Alex’s new relationship, so this was a decent way to mix things up there.

As you can imagine though, Alex is soon after called into action at the DEO, when Kara convinces J’onn to disobey the president’s orders so they can retrieve Mon-El. Thanks to Winn rebuilding the portal from Slaver’s Moon, Kara and Winn are able to beam aboard the Daxamites’ ship, pulling Mon-El out of a prison cell, and engaging in some fisticuffs with Rhea, Lar Gand and their guards. There was an especially neat twist in the plan too, whereupon Rhea tries to use her Kryptonite daggers on Kara again, only to have them barely affect her. This is because ‘Kara’ was actually J’onn in disguise! The twist didn’t mean much for long, since Kara nonetheless rushed headlong into danger soon anyway, but Mon-El’s conviction eventually convinces his father at least to back down, and allow his son to stay on Earth. Amazingly, it seems like the Daxamite threat to Earth is already over! 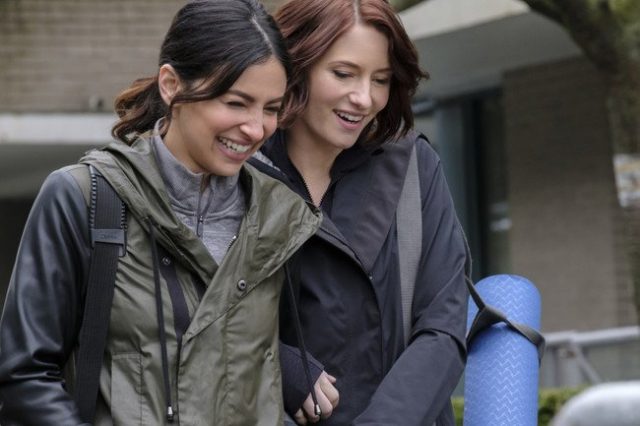 Obviously though, Season Two of Supergirl isn’t done yet, so Earth’s troubles haven’t yet subsided. J’onn is predictably reprimanded for rescuing Mon-El by President Marsdin to start, though seems to avoid consequences for now. The first official confirmation that President Marsdin is an alien in disguise however (this was hinted at with her first appearance around the start of the season, though only with glowing eyes that also hinted the possibility that Marsdin could have been a disguised Cyborg Superman), seems to suggest that some nosy alien force is very high up in the American government, one with a clear investment in what’s going on with the Daxamite royal family. Not only that, but Rhea doesn’t take too kindly to Lar Gand’s supposed ‘betrayal’ of letting Mon-El stay on Earth, stabbing her husband dead with a lead dagger, then announcing to herself that she’s not done with Earth right as the episode ends! So, does this mean that Rhea is the big villain of the season now? Is Cadmus just no longer an issue?

Considering that Supergirl is now taking an entire month off the air, and won’t return for Season Two’s final few episodes until towards the end of April, this was a bit of a weird note to begin a considerable hiatus on. “Distant Sun” was still a pretty good episode overall though, even if it didn’t properly capitalize on the whole Supergirl bounty idea, which feels like an aborted concept from another episode idea that was awkwardly tacked on here. Likewise, Alex’s subplot with Maggie didn’t flow with the rest of the story that effectively, but at least it led to a satisfying final result. The sudden idea of making Rhea the season’s apparent big bad in the end is kind of odd though, especially when Cadmus still makes far more sense as a major threat. Perhaps the rest of the season will go somewhere interesting with this, hopefully. For now, Mon-El got what he wanted at least, though with a vengeful Rhea overlooking Earth, we’ll have a little while to ponder the inevitable cost.

Supergirl 2.17: "Distant Sun" Review
Supergirl escalated the Daxamite conflict to pretty good effect this week, even if more could have been done with its core concept.
THE GOOD STUFF
THE NOT-SO-GOOD STUFF
2017-03-27
83%Overall Score
Reader Rating: (0 Votes)
0%