NOTE: Spoilers from throughout the first season of, “Legion” are present in this review

The latest landmark license-sharing deal between Marvel and a third party resulted in the Fox Entertainment Group finally getting their wish for two X-Men spin-off shows for TV networks, FOX and FX, albeit with Marvel having creative involvement in this case, unlike Fox’s X-Men movies. The FOX project, Gifted, hasn’t officially gone to series yet, but the FX pitch, Legion, has recently concluded its own eight-episode first season. Being an FX series, Legion also continues to expand the more adult-oriented side of Fox’s live-action X-Men universe, following on from the success of R-rated spin-off movies, Deadpool and Logan.

Even when compared to Deadpool and Logan however, Legion is unlike any X-Men project you would have seen before. Overseen by Fargo showrunner, Noah Hawley, Legion is a perverse, twisted and surreal new take on Marvel’s mutant lore, unfolding from the perspective of David Haller, the previously unknown illegitimate son of X-Men leader, Professor Charles Xavier. David has been a mutant menace in Marvel Comics lore since his debut in 1985, where he has served as a frequent foe of the New Mutants, as well as an occasional member of the X-Men. It’s impossible to classify David as either a strict hero or villain though, since a huge part of the character is his mental instability, which makes him highly volatile, and, most importantly, unpredictable. 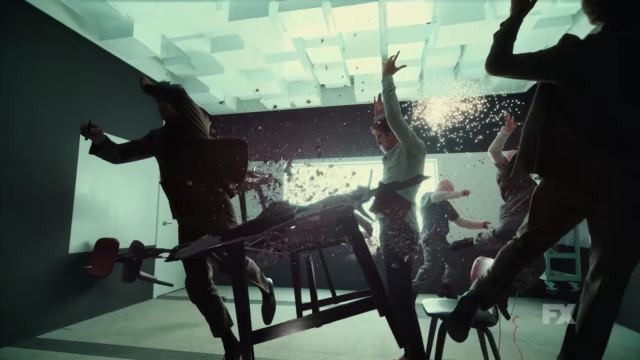 For this first season of Legion though, where David makes his live-action debut, David doesn’t yet know of any connection to Professor X or the X-Men, and begins by being stuck in a mental hospital. After being targeted by a clandestine government organization called Division Three that has been put together to identify, study and isolate powered people (i.e. mutants) though, David is saved and brought to a mutant sanctuary called Summerland, who aim to help him understand his powers, and his false diagnoses of mental illness. Helping this along is David’s lover, Syd Barrett, a mutant herself, one who swaps minds with whomever she directly touches, and one who also happens to be part of Summerland’s rescued mutants.

At first, Legion’s setup is fairly straightforward, especially as an X-Men spin-off show. As the first season goes on though, the series begins to become more confusing and unreliable. Legion is built around a lot of unreliable, intentionally confusing narration, which is meant to emulate David’s reality of not being fully aware of his mutant abilities, nor how they work. In Marvel Comics lore, David has a huge litany of powers, but they’re all a byproduct of his core mutant power, which allows him to absorb people’s psychologies and have them manifest as alternate personalities, in turn also replicating the powers of the personalities he copies. This highly flexible and unstable power makes Legion one of the most powerful and dangerous mutants in the Marvel Universe, and even in this self-contained television series, David’s powers are not to be trifled with, even as they merely seem to be limited to psychic-based abilities like telekinesis and telepathy for now.

As a deconstruction and character study of its titular character, Legion hits the ground running with its consistently sharp, brilliant storytelling throughout Season One. There’s a great sort of Breaking Bad flavour to the series too, as we see David become more uncontrollable as the season goes on, no doubt to keep becoming more dangerous in future seasons. Fortunately, it’s not just Dan Stevens in the lead role that proves to be a performance standout either. Fargo’s Rachel Keller is also a highlight as David’s tormented lover, Syd, who is with him on his journey, and gives him an important link to his humanity. Jean Smart, another Fargo alum, is another of the best performers as Melanie Bird, the telepathic overseer of Summerland, whose husband, Oliver became lost in the otherworldly Astral Plane many years ago. Jemaine Clement portrays Oliver, a fun and offbeat mental castaway that feels like a bit of a benchwarmer for the already-confirmed Season Two, but still makes enough of an impact in Season One to avoid the feeling of being wasted.

By far the biggest standout in Season One’s supporting cast however is Aubrey Plaza as David’s druggie friend and partner-in-crime, Lenny ‘Cornflakes’ Busker, who is seemingly killed in the pilot episode, after an accident related to David’s powers. Lenny nonetheless lives on however as the favoured face of a key source behind the show’s unreliable progression and narration; Amahl Farouk, a.k.a. Shadow King, the only other recognizable personality in Legion besides David who is taken from Marvel Comics lore. A frequent nemesis of both David and his father, both in the show and Marvel’s source comics, Shadow King is a mental ‘parasite’ that has latched on to David since birth, warping his memories, psychologically tormenting him, and aspiring to drain David’s immense psychic energy for itself. Plaza deserves Emmy recognition as much as Stevens for her performance on this show, since her sick and depraved portrayal of Shadow King feels truly groundbreaking, and unlike anything that has been attempted previously in superhero media in general, let alone X-Men media.

Another big plus to Legion, and another catalyst primarily realized by Shadow King, is its awesome, mind-blowing style. This show is easily one of the coolest-looking and most visually memorable shows in FX’s entire history, between the surreal reaches of David’s mind, the ever-shifting nature of the Astral Plane, and even the seemingly mundane areas of the real world, which have a neat 1960’s-inspired vibe that is otherwise starkly in contrast to the rest of Fox’s live-action X-Men universe, assuming it’s even placed there in the end (the showrunners and producers seem to go back and forth on whether Legion shares a universe with the X-Men movies and their spin-offs or not). There’s not that much action in the show in Season One however, to compensate, which may disappoint some fans who are used to the more dazzling skirmishes of Fox’s X-Men movies, or even many stories throughout Marvel Comics’ history. Still, Legion is incredibly visually striking, being a constant treat for the senses, even when it reaches its most confusing and psychologically hostile.

The first season’s modest eight-episode length feels just about right for the introductory stretch of Legion as well, with Season Two allegedly spanning an extended ten episodes in 2018. As usual for FX, there’s a clear focus on quality over quantity with Legion, and this has resulted in an overall excellent first season for the show, one that definitely earns its place in the prestigious FX catalogue, as well as Fox’s assortment of X-Men media. You’ll have to have some patience, as well as tolerance for a show that actively revels in any chance to screw with its viewers, but if you can manage that, then Legion easily stands as one of the freshest and most awesome shows of the current season, as well as the most satisfyingly novel superhero/comic book drama series to come along in ages. It also represents the latest inspired adults-only addition to Fox’s live-action X-Men franchise, and continues to have that universe pushing itself to progressively more experimental and fantastic new frontiers.

Even if Legion doesn’t ultimately connect to the mainline adventures of Fox’s live-action X-Men in the end though, it’s still a bold, sophisticated and gripping tale that just as easily stands on its own merits right from the start! If this is any indication of the high quality that we can reasonably expect for the collaborative X-Men spin-off shows by Fox and Marvel, then here’s hoping that we get plenty more of them to come!