Brooklyn Nine-Nine made a pretty blatant threat to the titular precinct at the start of last week’s delayed midseason premiere, and that threat continued to play into this week’s episode, at least in the majority of plots. “Serve & Protect” surprisingly boasted a main storyline that took place outside of the precinct, and away from the audit, but two subplots still allowed us to see how the detectives are going to fight to save their office.

If this seems like a bizarre structuring for an episode that’s supposed to have the fate of the entire precinct hanging in the balance, that’s because it kind of is. In terms of the humour and storytelling, Brooklyn Nine-Nine didn’t feel like it was quite on its A-game this week, even though most of the episode still offered some strong laughs between all three plots. It’s just odd that the show already seems bored with the idea of the audit, and by the end of this half-hour timeslot, the precinct’s fate already seems to be sealed. Really?

Fortunately, even if it was away from the Nine-Nine, Peralta and Diaz nonetheless headlined an amusing core storyline after a crime is reported on the set of one of their favourite detective shows, fictional series, “Serve & Protect.” After the lead actress’s laptop is reported stolen, the two find themselves annoyed at the show’s male lead, played in a highlight guest appearance by Nathan Fillion of Firefly and Castle fame, an actor who believes he is just as good as a real detective. Fillion injected a lot of effective humour into the episode whenever Peralta and Diaz weren’t taking the spotlight themselves, which is why it’s too bad that he turned out to be the culprit behind the crime, likely meaning we won’t see him on the series again anytime soon, if at all.

That said though, the twist behind the storyline was good, as Diaz immediately suspects the show’s executive producer, with all of the evidence pointing to the guy as well, despite Peralta refusing to consider the possibility. Peralta instead accuses Diaz of letting her cynicism impair her judgment, while Diaz counters by saying that Peralta is letting his own judgment get clouded, after he’s offered a consulting producer gig on the show, which looks like a bribe. The twist that Fillion’s character was behind the theft thankfully had the show avoiding the easy way out though, and the ending gag of the angry producers naming a fat, repulsive pervert villain after Peralta in the subsequent episode of the fictional show was a pretty hilarious way to end things, especially when Peralta is nonetheless excited that his name was used.

The two subplots that actually involved the precinct’s scrutiny strangely did away with most mentions of the audit itself, possibly because some of those jokes were already used in the midseason premiere with Teddy. Instead, one of the subplots involves Jeffords trying to figure out why Veronica is so determined to get revenge on him and the other detectives, which also involves Gina and Santiago trying to pick his brain. Santiago being a good cop and Gina being a bad cop was pretty funny, even though the final discovery of exactly what hurt Veronica is rather anti-climactic. Apparently, Jeffords had sat on a break-up gift for over a year, for want of avoiding breaking up with Veronica too soon after her mother died. That’s it? I think the writers could have gone a little further than that, considering how badly Veronica was allegedly hurt.

This just left Boyle and Holt to try and head off the deputy commissioner to plead for their precinct’s case. Sadly, this was the most disappointing and unsuccessful of the episode’s three storylines, since it sort of fizzles out with a weak payoff, despite some good jokes to at least carry the subplot through. After Boyle and Holt discover that the deputy commissioner is having an affair, they consider blackmailing him, or at least convincing him to blackmail himself, and that dilemma is where the humour tries to come from. Immediately though, Holt and Boyle, easily the two most morally uncompromising detectives at the Nine-Nine, are too unbelievable in this storyline. Sure enough, they also talk themselves out of the act before it happens, and that’s the whole storyline. That’s it? Frankly, it just felt like the writers didn’t know what to do with Boyle and Holt this week, so they just put them somewhere else, even if it didn’t ultimately have much of a point. 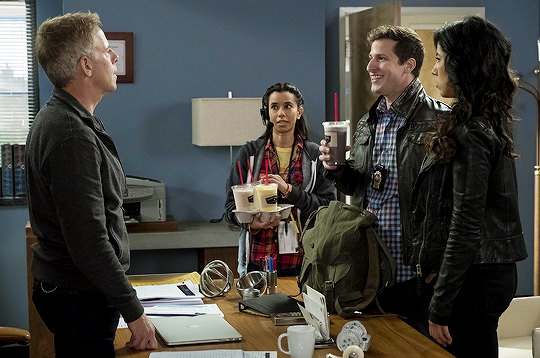 “Serve & Protect” surprisingly was at its best when it didn’t focus on the precinct’s imminent doom at the hands of Veronica, and on that note, the episode ending with Veronica already submitting a negative report, in a ridiculously short amount of time, was pretty unsatisfying. The whole mystery with what Jeffords did to Veronica was ultimately a let-down, even if the main plot of Diaz’s increased cynicism being motivated by Diaz worrying about losing Peralta’s friendship if the precinct closes down made for another great unexpected twist. With Veronica’s report already submitted, I guess we’ll have to see what happens next for the Nine-Nine, even if there’s no way a precinct closure will stick, lest we not have a show. Considering that it’s pretty unlikely that Brooklyn Nine-Nine is going to be cancelled after this season, I guess we can at least look forward to seeing how the detectives get out of their latest professional jam over the rest of Season Four.