Powerless officially seems to have found its recipe for strong comedy at this point, and hopefully it’s not too little, too late. After an especially standout offering in, “Green Furious” last week, the show aired another great highlight episode this week, at least, for some. In certain regions, this episode, “Emergency Punch-Up”, was mistakenly aired a couple of weeks ago, when NBC meant to have it pulled, due to the high-profile gas attack in Syria. Since this episode also deals with a gas attack, it was deemed too sensitive, and was delayed two weeks, at least in most of the U.S., as it was supposed to be. If you already saw it, then you already know that this is a strong episode of Powerless, but if you didn’t, then I’ll say again; It’s a strong episode!

This episode clearly seems motivated by trying to recapture the huge success of NBC’s fellow current workplace sitcom, Superstore’s highlight Season One episode, “All-Nighter”, which took the lead employees out of their natural work routine, while nonetheless trapping them in their office environment. The same thing happens in this case, after Wonder Woman nemesis, Doctor Psycho unleashes a devastating gas attack on Charm City, immediately before Emily’s Wayne Security crew is set to go on a work retreat to Coast City. The gas attack forces the Wayne Security building to go on lockdown, trapping the lead employees together, including Van. 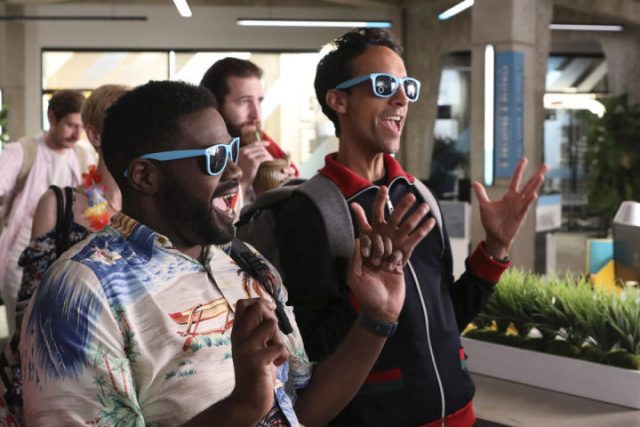 This was a sublime chance to get to know the employees beyond their duties at Wayne Security, as we delve a little deeper into what makes these personalities tick, whether it’s Emily’s incessant desire to do karaoke to unite everyone, or Van constantly being fed jokes to use at the expense of his workforce. “Emergency Punch-Up” was packed with lots of great little character moments like this, as Emily tries to keep her co-workers amused and calm with a series of increasingly ineffective retreat substitutes. This led to moments that were both very funny and delightfully uncomfortable, with a highlight joke coming during a theoretical desert island survival game, where Ron admits that he’d rather be stranded with Jackie than Teddy, Jackie insists on starving to death alone, and Wendy gruesomely admits that she would keep Van alive to eat him.

This bickering eventually escalates into Teddy throwing a prop spear that accidentally makes a hole in the nearby window, resulting in gas seeping into the office building, and forcing everyone to retreat into the lab. Now left with no supplies, they have to decide who goes out into the gas to retrieve gas masks and other such essentials, with Emily naturally drawing the short straw. After putting together a homemade HAZMAT suit however (the ones provided for Wayne Security were stolen by two absent employees who wanted to go to the retreat as Walter White and Jesse Pinkman from Breaking Bad), Emily is exposed to the gas after one of Van’s joke writers intercepts her, bringing her into a psychotic state that compels her to tell the blunt, aggressive truth to her co-workers. 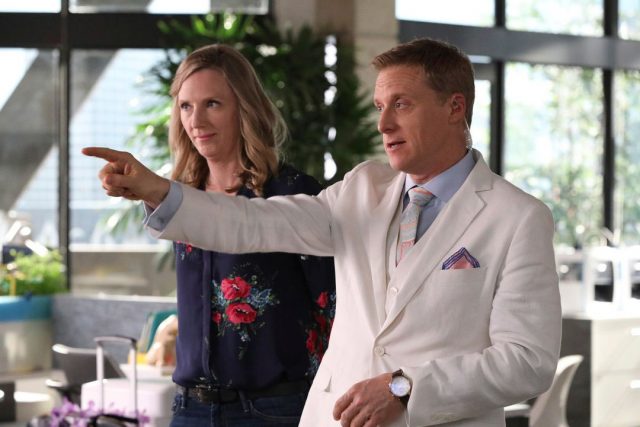 This was a great way to provide a climax for an episode that was almost entirely built on character revelations. Now with no politeness and no filter, Emily aggressively calls out the employees on their character flaws, which fortunately, is more hilarious than mean-spirited, despite Emily’s nasty commentary. Ron having to try and rescue Emily afterward is even funnier, as he tries and fails to lure her back with a cherry danish, while being told off-screen that he uses his cuteness as a crutch. The employees silently agreeing that it’s true behind Ron’s back was an especially great way to capitalize further on the joke.

Of course, the idea of Doctor Psycho releasing a mere truth gas doesn’t seem that bad at first, beyond Emily’s flurry of colourful insults to the Wayne Security crew. It’s not long however before S.T.A.R. Labs confirms on the news that the gas will shut down the nervous system of anyone who is within it after a mere two hours, which has the employees desperate to get Emily back to safety. Fortunately, they find a clever way to do this, as they decide to concede to Emily’s desires and sing karaoke together (despite Teddy trying to break the machine previously), which gets Emily back into the group and safe! She even gets invited to a karaoke night afterwards, and best of all, Wendy isn’t allowed to draw a penis on her face when she passes out. D’aww…

The episode’s wrap-up is a bit hasty, especially when it very clearly glosses over the fallout of Emily’s comments, but that’s really the worst that one can say about it. “Emergency Punch-Up” is another standout episode that has Powerless really entering the true realm of its potential, providing a great way for us to get to know all of the lead characters beyond their job positions. The writing was clever and subtly witty, and the jokes were always sharp and humourous, which finally has Powerless starting to properly compare more to highlight NBC sitcoms like Superstore and The Good Place. We’ll have to see if Powerless can keep on this high note for the rest of the season, which might just be enough to coax enough of an audience back for a Season Two renewal. As usual though, my desire to see the show continue beyond this season keeps growing with every new episode!