Despite a move to a less attractive 10:00 P.M. timeslot at the start of this current television season, Agents of S.H.I.E.L.D.’s modest audience has more or less held steady. It appears to have been enough to keep the show going as well, with showrunner, Maurissa Tanchaeroen confirming on Twitter tonight that ABC has officially renewed Agents of S.H.I.E.L.D. for a fifth season! 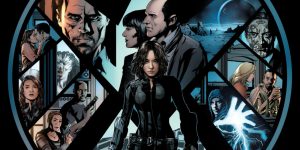 The Marvel Cinematic Universe-set series will thus be joining Marvel’s eight-episode event series, Inhumans on ABC this Fall, after Inhumans offers an early run of its first two episodes in participating IMAX theatres. Despite a clear cult audience, Agents of S.H.I.E.L.D. has also continued to enjoy positive reception from critics and fans throughout its soon-wrapping fourth season, which will air its season finale next week.

The continued presence of Agents of S.H.I.E.L.D. on ABC’s programming lineup will no doubt prove assuring to many Marvel fans, due to the aggressive expansion of Marvel’s television slate both this year and next year. On top of the eight-episode run of Inhumans this Fall, the Marvel Cinematic Universe will also be welcoming crossover miniseries, The Defenders and all-new spin-off series, The Punisher on Netflix later this year. ABC subsidiary, Freeform will also start hosting hour-long drama series, Cloak & Dagger and half-hour sitcom, New Warriors from Marvel in 2018, with streaming service, Hulu also preparing to launch Runaways from Marvel in 2018 as well. This is of course not counting FOX recently picking up X-Men spin-off series, The Gifted for the 2017-2018 season, with FX also hosting a second season of already-beloved X-Men spin-off series, Legion in 2018.

Keep assembling Eggplante for all major news and updates on Agents of S.H.I.E.L.D., and other Marvel Television projects.