We’ve spent plenty of time with Lucifer’s mother by this point, seeing at least one side of his parentage. This show’s rendition of Lucifer’s father, God Himself however, remains a mystery. That, however, claims to change in this week’s episode of Lucifer, “God Johnson”, where Lucifer’s latest murder case brings him to an insane asylum, where the prime suspect in the killing believes himself to be God. The thing is, he may be right too!

“God Johnson” kicks off with a really strong hook in this respect, especially as the episode begins with a frame narration, showing Lucifer claiming that he’s a delusional man that made up the fact that he’s The Devil. Yes, it’s no doubt a fake-out, and a bit redundant, but it does hook your attention, especially since Lucifer really does commit himself to God Johnson’s mental institution, so that he can start investigating suspects in the murder.

Not only did this make for some especially off-the-wall humour for Lucifer this week, but it also allowed for an interesting way to separate Lucifer and Chloe in the latest case-of-the-week, without forcing them into conflict again. Lucifer believes that confirming God as the killer will free him from the anxiety of having to face his father, but it’s not long before God Johnson is shown healing a woman that was attacked, not to mention that he also knows Lucifer’s original name, “Samael.” Granted, as Amenadiel says, that knowledge could feasibly be found on the internet, but the divine healing is pretty hard to dispute. By all appearances, Lucifer really does seem to have reunited with his father.

Lucifer facing a surprisingly forgiving and understanding father also made for a great twist to boot, considering that both Lucifer and Mama Morningstar have built up this show’s rendition of God as a vengeful, apathetic and thoroughly cold divine creator. Seeing a surprisingly warm and caring God was an awesome twist, and one that frankly makes a lot of sense, which really speaks to how charismatic both Lucifer and Mama Morningstar can be as characters. Lucifer roping Linda into being his accomplice with freeing God Johnson also led to lots of standout laughs, as not only does Lucifer bust God Johnson out of the mental institution, but he and Linda also try to reunite him with Lucifer’s mother. This made for more standout and amusing interactions, as Mama Morningstar also faces her disagreeable husband, who cast her into Hell thousands of years ago.

Chloe, meanwhile, is the one truly working on the case-of-the-week proper, even if it’s another case that somewhat peters out by the end. After Chloe tries to exploit a doctor’s crush on her for intel, with some very funny and unhelpful assistance from both Maze and Amenadiel, she eventually discovers that the woman that God Johnson healed claimed that her attacker was Santa Claus. Once Lucifer and the doctor discover that the Santa mask and hat are gone, they rush to catch the killer, who has both Lucifer and God Johnson drugged and strapped down, explaining the frame narration with Lucifer at the start. God Johnson is unaffected, but Lucifer is heavily sedated, on account of being vulnerable, due to Chloe being nearby. Turns out, the person under the mask is a nurse, who got a job at the insane asylum to torture and attack her mother, who was the woman God Johnson healed. Disappointingly, this is another lame killer with a really unimpressive motive. That’s a let-down, and seems to be more mounting evidence that Lucifer is moving further away from caring for its procedural element lately, for want of placing more emphasis on the divine storytelling for Season Two’s climax.

Fortunately, the show did find another smart way to play with expectations, after Chloe conveniently shows up in the nick of time to arrest the nurse and save Lucifer. Turns out, God Johnson wasn’t actually God, but simply found a divine belt buckle by chance in a gift shop, which gave him the knowledge and power of life and creation when he put it on, leading to him seemingly possessing the secrets of God. This has Lucifer even more furious that God wouldn’t own up to how he condemned Lucifer and Mama Morningstar in ages past, seemingly solidifying his desire all the more to charge into Heaven and overthrow his father! The belt buckle even serves as another broken piece of the Flaming Sword as well, though it doesn’t appear to be the only one. There’s only two episodes left in the season, and while I figured that the show would move a little faster with Lucifer’s siege on Heaven, we might actually be waiting until Season Three for the Flaming Sword to be properly put into action at this rate. 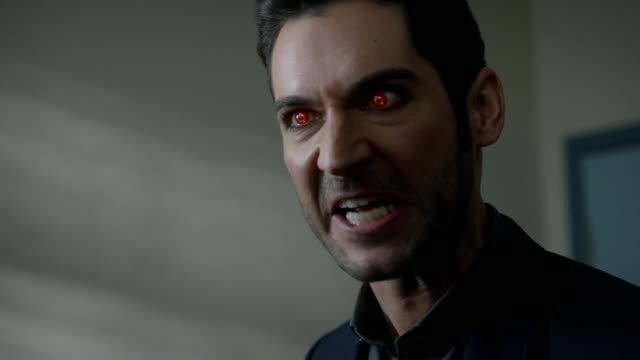 “God Johnson” nonetheless felt like a clever and especially memorable episode of Lucifer however, despite another disappointing end to another underwhelming case-of-the-week. The case-of-the-week at least served to tie in well with the over-arching Lucifer storyline, so it could have been worse, but it really seems like Los Angeles is incubating some lame killers lately. That said though, perhaps it’s ideal that Lucifer didn’t get off so easy with facing his father, and his related demons, and nor did Mama Morningstar, who is left to plead with Dan for comfort at the end of the episode. Barring a serious rush of storylines over the next two weeks though, it’s looking increasingly likely that the decision to lop four episodes off of the end of Season Two is going to hurt the climax of the season, since Lucifer doesn’t have much time to find whatever remains of the Flaming Sword before Lucifer goes off the air for the Summer.