After Peralta and Diaz end up arrested upon trying to bring down Lieutenant Hawkins at the end of this week’s previous season finale episode for Brooklyn Nine-Nine, “Crime and Punishment” follows a bit of a time jump from those events, as the two prepare to face trial. The Nine-Nine comes together to try and find evidence that will exonerate Peralta and Diaz for the bank robbery, while also pinning the crimes on their rightful perpetrator, Lieutenant Hawkins, but with time running out, are Peralta and Diaz going to end up being sent to the big house?

As a closer for Season Four, “Crime and Punishment” generally worked very well, and was an improvement over the good, but beneath Brooklyn Nine-Nine standards-level, “The Bank Job” that came previously. The humour was a lot more solid and consistent in this episode, even as the climax and stakes become surprisingly serious later on, at least for a goofy sitcom like this. Both Peralta and Diaz having to face hard consequences for trying to do the right thing brings out surprising reactions in both, and reactions that viewers would never anticipate, which is often the best part of this episode. 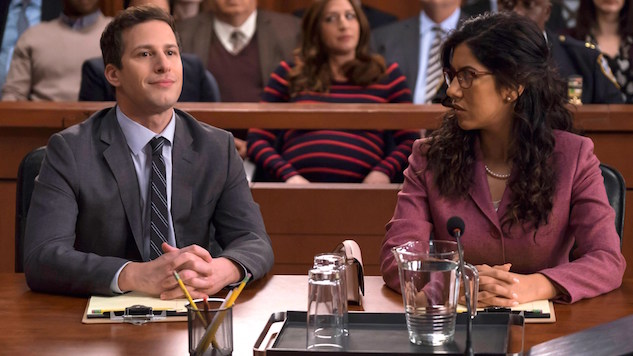 Surprisingly, it’s Peralta that’s the braver of the two detectives when it comes to facing the music. Linking up with Santiago to produce a remote lead, specifically a disgraced good cop that Hawkins previously ran out of New York, Peralta faces the drama head-on, and tries to put on a happy face. Peralta even demonstrates some truly unexpected maturity when he tries to prepare Santiago for the possibility that he may be found guilty, even though she refuses to accept it. All of this is done without sacrificing some solid laughs from Peralta’s character as well, who does manage to put a funny face on a seemingly hopeless situation.

Diaz, meanwhile, surprisingly prepares to flee New York, which is even more surprising than Peralta actually growing up and being surprisingly dignified in the face of adversity! Again, the laughs weren’t wholly sacrificed with Diaz, but this is nonetheless probably the most vulnerable and scared that we’ve ever seen her. The dramatic scenes between Diaz and Holt also often served as superb episode highlights, as Holt has to help Diaz fight through her fear and not give up on herself, nor her Nine-Nine family. It even looks like Diaz is truly going away at first too, though obviously, she does show up for the climax of the episode after Holt inspires a change of heart in her, since there’s no way that Diaz’s character is leaving the show at this point. 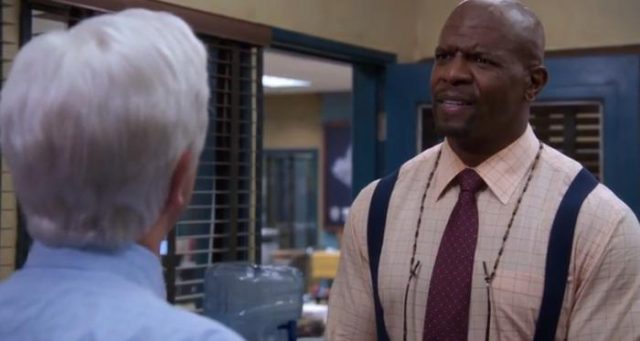 There’s also a subplot, albeit a tightly connected subplot, that unfolds with Jeffords and Boyle, as Jeffords accompanies Boyle to try and enlist a hacker friend to find evidence that will help exonerate Peralta and Diaz. This subplot mostly served as a one-note farce, but it was executed fairly well, as Jeffords keeps getting humiliating dirt dug up on him by a growing number of hackers, who continue to struggle with the security systems of the bank that they’re hacking. There was also a running joke of Boyle becoming white-haired and frail in the wake of Peralta preparing to face trial, which was fairly funny, even if the show did miss an opportunity to bring up Gina being impregnated by Boyle’s most hated cousin in the previous episode.

Despite how frightening everything is for Peralta and Diaz, the climax of the episode sees Peralta and Santiago successfully bring in the decisive witness, the man that can point the finger at Lieutenant Hawkins, and save Peralta and Diaz! Once Boyle and Jeffords finally do crack the bank data that they’re trying to get into though, they discover that the new witness is a fake, and is also on Lieutenant Hawkins’ corrupt payroll. With the final testimony being submitted against Peralta and Diaz, even if it’s perjury, the judge declares both of them guilty, as the episode and the season quickly end. After all of the Nine-Nine’s efforts, it was all for nothing. Peralta and Diaz are going to prison.

The prison sentence is a great cliffhanger to end Season Four of Brooklyn Nine-Nine on, and feels a lot less sudden and contrived than the Coral Palms turn that this season started with. This does sort of recycle the idea of the precinct having to band together to rescue two of their own from a big criminal, but starting Season Five with Peralta and Diaz in prison should no doubt lend itself to some awesome new humour, especially after Santiago went undercover in a prison towards the end of Season Three. “Crime and Punishment” thus served as a solid second season finale episode for Brooklyn Nine-Nine this week, one that ends the season well, while spotlighting Peralta’s and Diaz’s drama to good effect. The two being sent to prison is even worse when one considers that they’re cops, but I remain confident that next season will be able to find the humour in even this, thankfully!