Adam Sandler’s studio, Happy Madison has so far released three movies under its four (which will now be followed by another four-movie deal for the streaming platform) movie deal with Netflix. The first, The Ridiculous 6, was an abysmal testament to just how far Sandler’s crew will sink when they don’t have any studio intervention whatsoever. The second, The Do-Over, was an extremely forgettable and low-grade action-comedy that took on the asinine task of trying to make Adam Sandler and David Spade credible action stars. Needless to say, that failed.

This brings us to the third and newest Sandler-made Netflix movie, Sandy Wexler, which, to its credit, is the most creative and least bad of the three Happy Madison movies released on Netflix so far. That said though, it’s still not particularly great in most respects. Sandler is at least trying with this one though, plus a likable supporting performance from Jennifer Hudson gives this movie much more class than Happy Madison normally deserves. As usual, if you’re an Adam Sandler fan, then Sandy Wexler will give you much of the same body of work that you already love. For everyone else though, this movie is still too forgettable and too underwhelming to merit more than a single stream if you’re a very bored Netflix subscriber.

Sandy Wexler stars Sandler as the titular character, a highly capable, if socially awkward Hollywood agent living in the 1990’s. The movie works on a frame narration of sorts, as friends and colleagues of Sandy in 2017 (played by pretty much anyone in the entertainment industry that probably owes Sandler a favour in real life), recount the eccentric tale of his professional history. It’s actually not too bad of a setup for a character-driven comedy, and like I said, it at least feels like Sandler is truly trying with this one, and not just sleepwalking through his performance to get to another easy payday.

Even then though, Sandler’s comical nasal voice impression loses its novelty just under halfway through the movie, and as much as Sandy Wexler wants its titular character to feel like a fully-developed, three-dimensional human being, he never truly does, sadly. It feels like Sandler is stuck between trying to play Sandy as a recognizably ‘real’ person, and trying to play him as a caricature, and neither side truly manages to win out, resulting in a bizarre character that feels too far removed from reality or farce. That’s better than the agonizingly listless performance that Sandler gives in both The Ridiculous 6 and The Do-Over, but he still doesn’t quite nail that sweet spot of making Sandy a lovable comic personality of his, seemingly an attempt to chase his highlight characters from the 90’s, like Happy Gilmore, Billy Madison, Bobby Boucher, and, going a bit further in time, Longfellow Deeds. 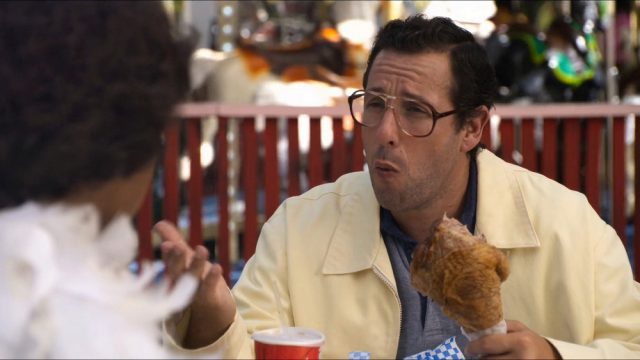 It’s Jennifer Hudson that makes Sandy Wexler at least watchable, as she’s truly adorable in her lead female role, as a childrens’ amusement park singer that Sandy discovers, and wants to help launch a music career. Hudson’s perpetually wide-eyed charm as accidental success, Courtney Clarke gives this movie the genuine sense of heart that it so badly needs from Sandy. It also helps that Hudson is a wonderful singer, one who has also leveraged that talent really well in movies like Dreamgirls, allowing her to play an optimistic, good-hearted client that you can’t help but root for, even when the movie forces a trite romantic arc between Courtney and Sandy that it possibly could have done without.

In trying to cover so much ground with Sandy’s professional career, Sandy Wexler also includes a truly enormous supporting cast. This ranges from Kevin James as an aspiring puppeteer, Terry Crews as an up-and-coming wrestler, Rob Schneider as his latest racist stereotype (who is supposed to be Sandy’s off-screen, but ever-present landlord), and Nick Swardson as a very unlucky stuntman, with all four of these actors being Happy Madison regulars, of course. Beyond those Happy Madison regulars, there’s tons of cameos in Sandy Wexler, from Jane Seymour, to Milo Ventimiglia, to Chris Elliott, to Kate Micucci, to Dana Carvey, to Judd Apatow, and a whole bunch of other recognizable faces. Hell, there’s even an actual cameo from Beavis and Butthead at one point, complete with Mike Judge voicing them again, and fully bringing the 1990’s nostalgia home. Thus, everyone involved in Sandy Wexler is… Fine. Even Swardson is a little less insufferable than usual, even if I can’t say the same for Schneider. This is well and truly Sandler’s and Hudson’s show, but even if none of the other actors manage to excel, they don’t truly embarrass themselves here either. That’s more than some Happy Madison movies allow people to get away with!

Like its lead character, the story of Sandy Wexler is a little at odds with itself. The movie wants to be a quirky comedy with heart, and there are moments that it succeeds in being that, but there are also times where Sandy Wexler seems to fly too close to the sun, and try to tug at the heartstrings with a character that hasn’t truly earned that. The movie’s questionably necessary love story makes things even worse, since it suddenly pivots things away from understanding Sandy’s character and what makes him tick, to the fact that Sandy is somehow not complete without a woman in his life. I’m not sure if that’s a regressive idea or not, seeing as this is an Adam Sandler character.

There does manage to be something of a theme in here, even if Sandy’s character is a little too inconsistent to make it fully shine through. The idea of Sandy being a doormat and needing to learn to stand up for himself and go after what he wants, not what he thinks his clients want, is a solid one for the personal journey of a character-driven comedy. It’s just too bad that the movie couldn’t just stick with that, as it starts becoming lost in a bunch of 90’s nostalgia, fame angst and lovesick pining. There is a decent comedy trying to get out here, but it’s weighed down by too many storytelling distractions. This also isn’t helped by the fact that Sandy Wexler is way too long as well, clocking in at a staggering 131 minutes! About a half-hour of this movie needed to be cut out, since that would have streamlined the story, and probably improved the wonky pacing.

Steven Brill, one of Sandler’s frequently recurring Happy Madison directors, returns to direct Sandy Wexler, after also directing Happy Madison’s previous Netflix offering, The Do-Over. Now that Brill isn’t saddled with having to botch a bunch of action scenes, his direction does improve a bit in Sandy Wexler, even if it still feels like he’s giving Sandler way too much creative control in some of these scenes. This can result in some really huge tonal confusion, as some scenes are played as serious heartfelt drama, only to be followed with ludicrous scenes of things like Nick Swardson being hit in the face with a bird, or Kevin James having to work Sandler like a puppet during a business meeting. Yes, Sandy Wexler seriously does get that ludicrous at times!

Like the rest of Sandy Wexler, Brill’s direction is serviceable, even if some of the movie’s recurring gags, like the aforementioned Swardson goof, can often feel pretty forced. It feels like Brill doesn’t quite have the directing competence to fill in the gaps with Sandy’s character, which the somewhat inadequate script leaves in its wake, with Brill being as unsure as Sandler about whether Sandy Wexler is supposed to be a down-to-earth character piece, or a typical Happy Madison-approved farce. I suppose Brill is still avoiding sinking to the bottom standard of The Ridiculous 6 with his own directing efforts though, so maybe we should just be thankful for that.

Sandy Wexler feels like it sprung from Sandler finally seeming to realize just how far he’s fallen in the eyes of the movie industry, especially with its 1990’s setting, and obvious attempts to recapture Sandler’s beloved character roles of the past. Its pokes at a legitimate belated mid-life crisis for Sandler do sometimes come close to creating a true bridge between Sandler’s sense of humour, and Sandler’s artistic commentary. This is especially true when one recalls that Sandy is meant to be an homage to Sandler’s real-life former agent, Sandy Wernick, so there is some genuine humanity that shines through here and there. This movie still just doesn’t quite succeed though. Sandy Wexler may ultimately be the least bad out of the three current Happy Madison movies on Netflix, but it’s still barely hovering above the realm of mediocre, and still can’t even be truly called, “Decent.”

Like I said, if you can tolerate Adam Sandler, then Sandy Wexler is worth a quick stream, even if it’s doubtful that you’ll ever stream it a second time. If The Ridiculous 6’s problem was its aggressive disregard for any degree of effort or quality, and The Do-Over’s problem was its complete inability to leave an impression, Sandy Wexler finds a third stubborn issue for Happy Madison’s Netflix movie slate, in that it just feels confused and inconsistent. Some of it does manage to be satisfactory, but those moments quickly become buried in tedious story arcs that should have been cut out, or forced, juvenile Happy Madison gags that really don’t work.

Seeing as Sandler and co. are slowly inching their way towards a legitimately acceptable comedy for Netflix, maybe the fourth time will be the charm here, especially since Sandler at least appears to have been trying in Sandy Wexler, unlike in his studio’s previous two Netflix offerings. I can hope anyway. After all, it’s not like Happy Madison and Netflix are going to be parting ways any time soon.