Doctor Who builds on the conclusion of last week’s especially superb episode in this week’s offering, with, “The Pyramid at the End of the World” realizing the unspecified crisis that was foreshadowed in the Veritas simulation with the mysterious monk creatures. Apparently, this is the middle chapter in a three-parter, and while it’s still a fairly good episode in most respects, it doesn’t manage to fully keep pace with, “Extremis” from last week, having to contrive a few story bits together that don’t totally work.

Now that the simulated Doctor has sent the necessary intelligence to the actual Doctor, he’s ready and waiting as Bill is visited by a U.N. representative, who has her summon The Doctor as the world’s representative authority during times of alien crisis, a nice callback to the end of Series Eight. Apparently, a 5,000 year-old pyramid has suddenly materialized at the exact strategic border between the world’s three most powerful military forces, with The Doctor and Bill quickly deducing that it’s actually a spaceship. Sure enough, it’s those monk things from the Veritas simulation, and they come with an alleged gift; In exchange for consent, they will save the world from its impending doom.

This is sort of an interesting idea, though there are a few head-scratching moments with the monks. Chief among these is the fact that Earth must voluntarily turn over their planet using some sort of gesture of love, or else the monks will kill the consenting party, due to the consent being impure. That’s a bit silly and illogical for several reasons. First, why the monks even want Earth is never clearly established. Second, given how consent is ultimately supposed to play out, why does it matter if the person consenting has political influence or not? Third, why bother killing people whose consent is apparently impure? Maybe some of these blanks will be filled in with next week’s episode, but at this point, it feels like the monks are just doing whatever the script tells them to, with their motivations and actions not always perfectly adding up.

Regardless, after the U.N. representative is killed for trying to consent out of fear, The Doctor refuses to give consent, and the military officials try to stop their conflict, thinking that WWIII is what destroys humanity. That’s not actually the case though, as the monks’ ominous Doomsday Clock is unfazed, meaning that the imminent disaster is happening somewhere else. The Doctor then thinks about the opposite of where the evidence would logically be pointing, and in an impressive series of deductions, he manages to narrow the disaster zone down to a secret biology lab, which is apparently being watched by UNIT. Speaking of, despite mentioning them several times, where exactly was UNIT here? Maybe we’ll see them next week? 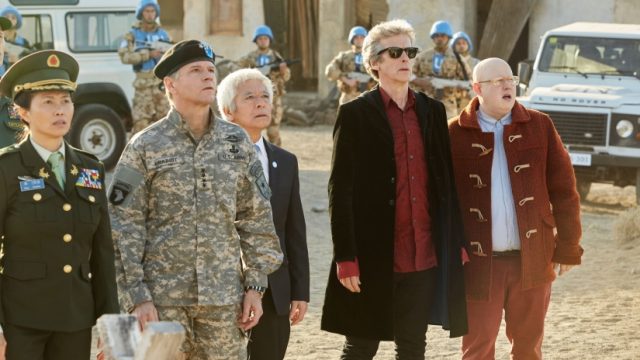 In any case, it turns out that the lab in question is building some sort of super-virus that turns whatever it infects into goop, as if it’s the damn Majini parasite from Resident Evil 5. Yes, I know, it’s ridiculous, but it’s Doctor Who, so just go with it. Anyway, after issues inevitably break out at this lab, The Doctor has to try and work with the surviving scientist to sterilize the lab by blowing it up, thus saving humanity before the automatic air filtration disperses the pathogen into the atmosphere. Again, I’m reasonably certain that top secret research labs working on ridiculous super-viruses wouldn’t have such a stupid and careless air filtration system, which is another point in the episode that really didn’t feel like it made sense. Does this lab seriously not have any cautionary measures in case one of their synthetic bacteria strains gets loose?

Mostly, this just served as a time-sensitive excuse, along with the subsequent bomb that The Doctor builds (he couldn’t have made a remote-detonated bomb, I guess), to force The Doctor to get stuck at an obstacle, particularly after Nardole passes out in the TARDIS, presumably from the virus, because The Doctor, “Got his lungs cheap”, in a quick throwaway explanation. Since The Doctor can’t see, he can’t enter a simple combination that would get him to safety, so he intends to sacrifice himself, while finally confessing to Bill that he’s been blind since their trip to space. Bill naturally doesn’t take this well, and goes against The Doctor’s orders to consent to the monks, and since it’s out of love, this naturally works. The result is The Doctor getting his sight back, allowing him to escape, but at the cost of Bill handing Earth over to the monks. Again, this makes the demand of political influence make no sense if Bill can just do this, especially when the monks arbitrarily decide that she represents The Doctor for literally no reason, but whatever. At least it’s a fair enough setup for the third and final chapter of the monks’ storyline next week.

“The Pyramid at the End of the World” feels like it sacrificed some story logic for want of cohesion when it came to setting up next week’s episode, but it still made for a fairly enjoyable Doctor Who adventure that gave us one last taste of The Doctor, “Saving the world with his eyes shut.” We’ll have to wait for next week to see the cost of Bill’s deal with the monks, though The Doctor conveniently getting his sight back for this climax might make his victory a bit less impressive than it could have been. Still, with Nardole passed out in the TARDIS, Bill now being humanity’s ambassador to the monks, and The Doctor just barely saving the planet from extinction, the show’s protagonists are in an interesting spot to move forward on an Earth that may look very different the next time we see it.

Doctor Who 10.7: "The Pyramid at the End of the World" Review
Doctor Who continues the story of the mysterious monk invasion on a fairly good note this week, despite a handful of story stretches.
THE GOOD STUFF
THE NOT-SO-GOOD STUFF
2017-05-27
81%Overall Score
Reader Rating: (0 Votes)
0%