NOTE: Spoilers from throughout the fifth season of, “Arrow” are present in this review

After a fantastic second season, which pitted Oliver Queen’s vigilante alter-ego, The Arrow against DC Comics’ super-mercenary, Deathstroke, Arrow seemed to have trouble re-capturing that same momentum over the next couple of seasons. Season Three attempted to bring in cunning Batman nemesis, Ra’s Al Ghul and his League of Assassins, though the result was an uneven, overly angst-y season that just didn’t feel as tightly realized. Then, Season Four went firmly off the rails, introducing magic-powered foe, Damien Darhk, and filling the series with sorcery and enchantments, which suddenly had Arrow moving strangely far away from its roots as a more grounded, streetwise drama. Naturally, that experiment didn’t work out perfectly either, especially when it was forced to culminate in easily the series’ worst season finale to date.

Fortunately, even as it looked like Arrow might never recapture that same outstanding, dark and intensely personal punch from Season Two, Season Five finally brought the show fully back to prime form. While the season didn’t hit its stride right away, mostly due to trying to initially focus on an original new crime boss named Tobias Church, who doesn’t even exist in DC Comics lore, the season eventually became highly dramatic and relentlessly exciting, offering some of the best story ideas in the series’ entire run to date,! This became especially evident when it finally started properly developing the season’s actual main antagonist, the enigmatic and deadly Prometheus. 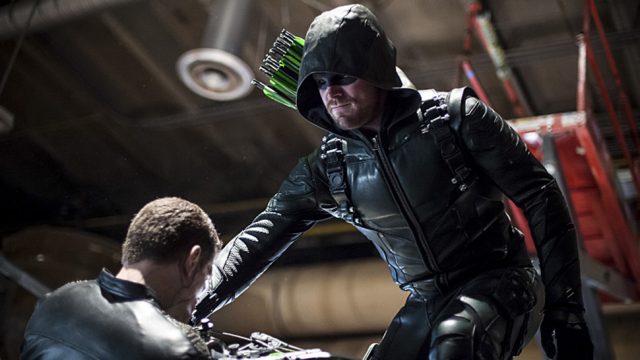 Prometheus was a huge part of the reason why Season Five of Arrow was such a great success, even when the show took heavy liberties with the character’s portrayal in DC Comics lore. Despite beginning as another dark mirror of Oliver, much like Malcolm Merlyn first was in regards to Oliver’s family history back during Season One, Prometheus exceptionally became a living ghost of Oliver’s former self, becoming obsessed with undoing Oliver’s methodology, progress and idealism as a hero. Every time Prometheus seemed to be on the ropes, he’d have a contingency plan that would firmly put him back in charge of the season’s biggest and best conflicts. This had the show effectively coming full circle, as Oliver must face the killer and sociopath that he once was when this series started back in 2012, having to fully accept it and overcome it to place the last pieces in his transformation into DC hero, the Green Arrow.

Prometheus only became more dangerous once we finally knew who was behind the mask as well, even if the reveal came very unexpectedly in the middle of a random episode. Turns out, Star City’s district attorney, Adrian Chase was the man behind the mask, the illegitimate son of Justin Claybourne, one of the criminals that Oliver originally killed from his father’s list, back in Season One. Claybourne wasn’t one of Oliver’s targets in the season proper, though he was mentioned in Arrow’s pilot episode as being on the list. The series also had a clever red herring regarding Prometheus’ identity in the form of Vigilante, a murderous, gun-toting psychopath who more aggressively cleaned up criminals in Star City, whom Chase normally is in DC Comics lore. Despite being switched to be this universe’s rendition of Prometheus however (leaving Vigilante’s true identity on Arrow a mystery for now), Chase’s obsession and ruthless efficiency, to the point where he even murders his own wife to stay one step ahead of Oliver, made him an intense and memorable villain that finally gave Arrow another excellent big bad to stand on par with Deathstroke! 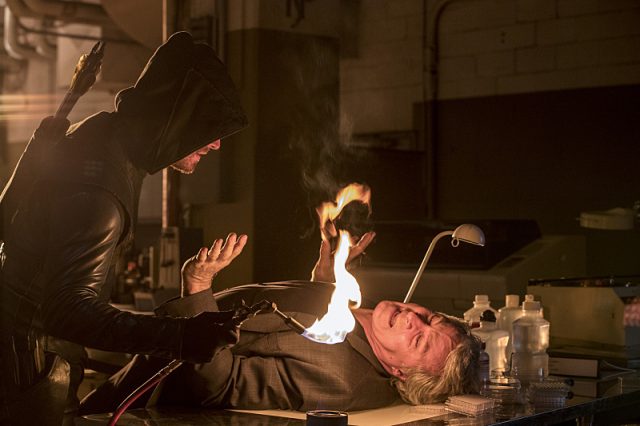 Another successful element to Season Five is Oliver having to recruit and train a new team of vigilantes, after Thea hangs up her hood to help Oliver in his public identity as Star City’s mayor, and Laurel ended up being killed last season. This came via helping former Palmer Technologies tech genius, Curtis Holt realize his DC superhero identity as Mister Terrific, guiding street thug, Rene Ramirez to embrace a better symbol as Wild Dog, trying to set straight vengeful teenage Black Canary impersonator, Evelyn Sharp, and, even if he didn’t stick around long, giving supernatural ‘Ragman’, Rory Regan something better to fight for. Oliver’s new team wasn’t likable or useful right away, but by the back half of the season, they made for a strong way to inject some fresh blood into Arrow, especially as veteran Team Arrow allies, Diggle and Felicity thankfully remained with the team, at least after Diggle was pulled away from his re-signing with the military.

Once the new recruits came into their own, they added their own great emotional stakes to the season, as Rene tries to find the resolve to reclaim his daughter, while Curtis ends up losing his husband over his desires to make a difference on the streets. Evelyn ended up betraying Team Arrow around midseason by contrast, and wasn’t totally put to full use as one of Prometheus’ goons, but fortunately, the team nonetheless found an awesome new female bruiser in former Central City police officer, Dinah Drake, a sonic-screaming metahuman whom Oliver entrusts to be the new Black Canary. Dinah’s cop training at least did make her useful on the team right away, even if it’s clear that her best character storylines are probably still ahead of her. Dinah taking up the Black Canary mantle in Laurel’s place however also allowed Quentin Lance to effectively move forward in Season Five, channeling his grief over losing Laurel, and having Sara so distant as a time traveler on Legends of Tomorrow, and he did this by striking up an unlikely friendship with Rene, so he can motivate him to fight for Rene’s own daughter. 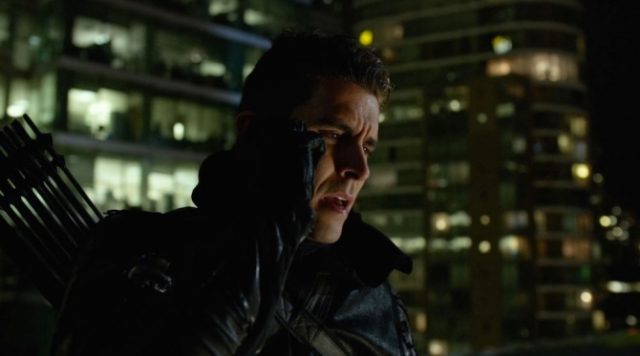 This leaves the flashbacks of Season Five, which still felt very uneven, since the show’s flashbacks weren’t able to fully recapture their appeal from the first two seasons once again, even in this much improved fifth season. The flashbacks still felt a little too perfunctory for much of this season, mostly existing to fill in the last remaining blank of Oliver’s pre-Hood past, namely his time with the Russian mafia, the Bratva. This was founded on Oliver trying to avenge the fallen Taiana, namely by using his Bratva connections to battle against Russian crime lord, Konstantin Kovar, played in a standout guest role by action movie legend, Dolph Lundgren. Fortunately, the way that the flashbacks came around to fill in the last of events before Oliver returned to Starling City back in 2012 was very inspired, completing Oliver’s transformation into his initial dark vigilante from Season One. This also came about with the introduction of Ra’s Al Ghul’s other daughter, Talia Al Ghul to Arrow, who trained Oliver in his proper vigilante technique over in Russia, and later served as another goon of Prometheus later in the season.

While not every episode shone as bright as the rest, Arrow’s inspired new plot directions, re-focusing on its grounded street-level drama, and truly impeccable over-arching villain, had Season Five finally having the show excel on the level it did during Season Two. This extra fresh and exciting fifth season had Arrow overtake sibling shows, Supergirl and The Flash in terms of quality this season, even if the equally superb latest season of Legends of Tomorrow still proved to be a strong rival to it. Nonetheless, Arrow has pretty much completely managed to right the ship again, capping off Oliver’s struggle against his past to superb effect, while delivering no shortage of compelling action, drama and heroics. 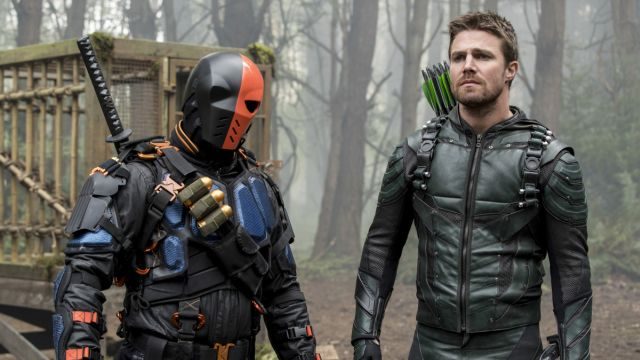 The season finale on Lian Yu, mercifully giving us a break from yet another psychopath attacking the whole of Star City for the season’s climax, even ended up being one of the best episodes of Arrow to date, with both it and the series’ comparably superb 100th episode this season bringing back lots of great familiar faces from the show’s past. Arrow has spent too much time being blatantly out-classed by its two spin-offs, and it’s awesome to see it finally returning to the forefront of appeal in The CW’s shared DC Television Universe, the very universe it originally started, with its superb fifth season. Even as the show seems to firmly close the book on Oliver’s dark past with the conclusion of the season, it feels like Arrow is fresher and more full of possibility than it’s ever been. Now unburdened by his past, Oliver is free to be the best Green Arrow he can be, and that should hopefully mean another worthy new force to square off against throughout next season!

Arrow: Season Five Review
Arrow finally managed to right the ship with a truly superb fifth season, which had Oliver facing and conquering his own dark origins, thanks to a truly exceptional new villain.
THE GOOD STUFF
THE NOT-SO-GOOD STUFF
2017-05-31
90%Overall Score
Reader Rating: (0 Votes)
0%