This movie is a truly incredible achievement, especially in a Summer where every major blockbuster that doesn’t star a superhero or superhero team has been a misfire up to this point. One thing you should be prepared for however is that the titular ‘war’ in War for the Planet of the Apes doesn’t totally represent a spectacular, action-packed climax. Instead, this movie begins to lay the foundation for the original 1968 Planet of the Apes movie, or perhaps some altered version of it for this new timeline, by focusing on the psychology, themes and questions of inevitability when it comes to battling against nature. As with its two superb predecessors, War for the Planet of the Apes is an outstanding Summer blockbuster that’s as smart as it is exciting, and rounds off the origin story of humanity’s future ape overlords on a virtually flawless note!

Andy Serkis returns to the central role of Caesar in War for the Planet of the Apes, now faced with the foreshadowed menace from the end of Dawn of the Planet of the Apes coming to his metaphorical doorstep. Caesar now finds himself faced with a battle that he never asked for, against the desperate remains of humanity that see themselves as the heroes of our species, making a last stand against the dominant new ape strain that is starting to spread across the planet. This desperation has major emotional consequences for Caesar, and this leads to Serkis delivering his best, most impactful performance as Caesar to date, which is saying a lot, since Serkis deserves Oscar consideration for every single one of these Planet of the Apes prequel/reboot movies.

We also get returning apes from the previous movies in War for the Planet of the Apes, namely Caesar’s allies, Maurice, Rocket and Luca, as well as Caesar’s wife, Cornelia, along with Caesar’s son, Blue Eyes, and while it’s difficult to talk much about them without spoilers, rest assured that they remain standout characters in every respect here. We also get a couple of new character additions on the apes’ side, including Bad Ape, played by Steve Zahn, who is something of a comic relief character in an otherwise very dark and dramatic movie, but one that is actually portrayed very well, and has enough of an emotional center to offset his goofy exterior. Likewise, there is another big risk with the characters that once again tangles them up with the humans, and again, I unfortunately can’t discuss this human element without considerable spoilers, but I will say that fans of the classic Planet of the Apes movies should be pretty happy with how this personality spiritually bridges together these new movies with the old ones, at least to some degree.

For the first time though, the humans really do have an emotional struggle that feels perfectly on par with the apes in War for the Planet of the Apes, since we get a truly excellent antagonist in this movie, Colonel McCullough, played by Woody Harrelson. Yet again, I can’t discuss this character much without some key spoilers for the movie, but I will say that McCullough is an expertly crafted villain who provides not only a worthy obstacle for Caesar and the apes’ survival, but is also given a very effective, dramatic and genuinely sympathetic arc, which forces the audience to ask difficult questions about what they would do if they were in the same situation as McCullough in several respects. As great an antagonist as Koba was in Dawn of the Planet of the Apes, McCullough really does feel like the best antagonist of the Planet of the Apes prequel/reboot trilogy, and is probably one of the best antagonists in the franchise’s entire history, if I’m being honest!

Much like the character details, I can’t discuss too many specifics about the plot of War for the Planet of the Apes without giving away some crucial story details. This is definitely a movie that audiences will want to know as little as possible about going in, since there are quite a few twists and subverted expectations in this movie, as well as some clever lead-ins to the story material of the classic Planet of the Apes movies. How everything comes together is realized brilliantly in every respect, and provides a rare example of a perfect conclusion to an exceptional trilogy.

Again, I must stress however not to be misled by the title. If you’re expecting a big, prolonged climactic battle between humans and apes, that’s not really what this movie involves. Instead, War for the Planet of the Apes is more accurately a bleak post-apocalyptic drama, and one that actually has even less action than Dawn of the Planet of the Apes did when it comes down to it. Nonetheless, this is a riveting, emotional and effectively dark story about how everything ends for the struggling humans and Caesar’s apes, who find themselves fighting a conflict that they don’t actually want anything to do with. This provides a wonderful way to re-interpret the conflicts driving the classic Planet of the Apes movies, while also closing out this modern trilogy on pretty much the perfect note.

(NOTE: The spoiler section, when clicked, discusses connections to the classic Planet of the Apes movies, as well as potential post-credits scenes, and other potential sequels in these new prequel/reboot movies)

There are also no post-credits scenes in War for the Planet of the Apes, which also ends with both the last of humanity’s militant forces and Caesar both being seemingly killed, visibly cementing this movie as the rigid conclusion of the current story arc. 20th Century Fox is seemingly pondering a fourth movie for this revised Planet of the Apes canon that may begin a new story arc, but it looks like Caesar won’t be a part of it, if this movie’s ending is any indication.

Rumblings about Dawn of the Planet of the Apes antagonist, Koba being resurrected in this movie also only turned out to be merely half true, since Toby Kebbell does reprise his role as Koba in War for the Planet of the Apes, but only as an apparition that torments Caesar in his dreams. Instead, it feels like the role that Koba would have had in this movie, had the filmmakers actually found an effective excuse to resurrect him, instead went to another ape called Donkey, who is an ape working alongside McCullough’s human forces against Caesar.

There’s an air of melancholy and tragedy that continues to be wonderfully realized in the direction here, and is arguably realized even better than it was in the previous two movies, since War for the Planet of the Apes brings home this new Planet of the Apes prequel/reboot trilogy’s themes of struggling against the inevitable. In a clever way, Reeves acknowledges that the audience knows how this is all supposed to end, yet even then, he finds a smart and inspired way to subvert expectations, and create a trilogy closer that both delivers what we know is coming, yet does so with many different turns than audiences would anticipate.

The rest of the audio design in War for the Planet of the Apes is also excellent in every respect. As fantastic as the musical score is, there are also a lot of quiet moments where the apes simply sign to one another, and Caesar addresses whatever allies he has left. These scenes are carried entirely by the excellent performances and direction, and the fact that this incredible soundtrack also knows when to stay silent only makes War for the Planet of the Apes even stronger as a movie. This sublime audio job is a huge part of what makes this movie’s drama shine so much, and there’s never a sour note in any element of the sound design.

The previous two Planet of the Apes movies effortlessly delivered motion-capture performances that genuinely felt real. Even though the ape animations are effects, they’re made to feel perfectly real and convincing by the outstanding mo-cap work of the actors portraying them. This of course remains true in War for the Planet of the Apes, which is a visual masterwork once again. This movie is positively dripping with atmosphere, and when it comes down to it, it’s so visually well-produced that it really doesn’t need a bunch of flashy action scenes to grab the audience. Instead, War for the Planet of the Apes is so impeccably put together from a visual standpoint that the visual direction alone gives you every possible reason to invest in the story, even without a bunch of barely-present exposition or action here. Just about every mo-cap actor in War for the Planet of the Apes, in particular Andy Serkis in the lead role of Caesar, really does deserve an Oscar for their work here, since this remains some of the best mo-cap work in Hollywood history. 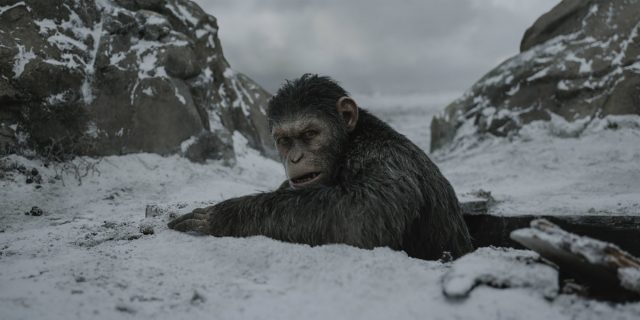 War for the Planet of the Apes Review
War for the Planet of the Apes is not only the best movie yet in an already excellent trilogy, but a genuine cinematic masterpiece in all respects, one that will be hailed as one of the best overall post-apocalyptic dramas of all time!
CHARACTERS100%
PLOT95%
DIRECTION100%
MUSIC & SOUNDTRACK100%
VISUAL EFFECTS95%
THE GOOD STUFF
THE NOT-SO-GOOD STUFF
2017-07-17
98%Overall Score
Reader Rating: (0 Votes)
0%