Almost twenty-one years have passed since Crash Bandicoot made his debut on Sony’s inaugural PlayStation console, but that hasn’t stopped the furry creature from becoming one of 2017’s biggest success stories. No, Naughty Dog’s mascot is on a mission this summer, and it’s been a roaring success thus far thanks to great sales, tons of buzz and generally positive word of mouth.

The reason for all of the above is a full remastering of the series’ three main titles, which happens to be dubbed the Crash Bandicoot N. Sane Trilogy. Fittingly named and well made overall, it’s a collection that features Crash Bandicoot, Crash Bandicoot: Cortex Strikes Back and Crash Bandicoot: Warped on one Blu-ray disc, or in one combined install file. All three have been lovingly restored and remastered, too, and are presented in beautiful HD as a result. As such, it aims to please longtime fans as well as those who are completely new to this classic series.

Together, this trilogy of platformers tells a running story, albeit a very basic one. In it, a young and innocent bandicoot is prodded, zapped and generally mistreated by a mad scientist called Dr. Cortex. He’s not alone, mind you, but he’s the only one who manages to escape after being turned into a larger, stronger and much more aware version of himself. One that can run, jump and spin like the best of them.

Over the course of these three unique platformers, Crash battles against the evil Dr. Cortex in an attempt to foil each and every one of his devious plans. The stories are basic, though, and barely have any depth. At first, you’re just playing a bunch of different levels en route to take down the big bad. Following that, you become a crystal hunter, as the crystals that Cortex needs to power his new space station reside in each of Crash 2’s twenty-something stages. Then, things get a bit more creative, when an evil mask becomes the second of two main evildoers.

Crash is joined by his sister, Coco, who’s playable in the N. Sane Trilogy. She factors into some of the story content, especially in Crash Bandicoot: Cortex Strikes Back, but can also be used to complete levels in all three games. She controls very similarly to Crash, but has different animations and happens to always carry her pink laptop computer. Said animations tend to incorporate her long blonde hair, which is tied up in a loose ponytail and spins along with the rest of her body.

Those who wish to play as Coco can do so with ease, by pressing a shoulder button to toggle between the two Bandicoot siblings. Furthermore, certain Crash 3 stages seem to want you to play as her instead of her bigger, more iconic brother.

If you’re new to the fold, then what you need to know is that the Crash Bandicoot N. Sane Trilogy holds no punches. It’s challenging, demanding and unforgiving. Hell, sometimes it’s even cheap to the point of frustration, as the result of sparse checkpoints and unfair level design. It’s a relic of its time, though, and one that has been remastered quite well.

Crash Bandicoot is unlike almost every other platformer out there since it isn’t a traditional left-to-right experience, nor is it a fully 3D one. Instead, each game’s levels mix stages that have Crash moving horizontally with ones that have him running towards the player or running further “into the screen.” It’s an interesting and rather unique style of gameplay, and one that sets the games apart from everything else out there. However, it is not without its faults, because it creates problems with depth of field and can cause lots of deaths as a result. What I mean by this is that it can sometimes be hard to judge how far away a platform is when you’re running ‘upwards,’ especially in some of the first game’s latter levels.

This issue is at its worst during those specific stages, but it isn’t exclusive to them. In fact, it can sometimes even be hard to tell how far you should jump when doing so horizontally, during levels that are more traditional in nature. It doesn’t help that Crash Bandicoot’s jumping mechanics were reworked during the remastering phase, making it so that the character doesn’t jump the exact same way as he used to back in the 90s. This has some purists up in arms, and makes the game harder than it otherwise would’ve been. It is not a game breaking problem, though, nor is it a reason to avoid making the purchase. You’ll get used to it, and if you’re like me it won’t bother you much because you hardly played the originals, or didn’t do so at all.

Back then, I was a Nintendo guy and always had a hard time getting into these games. My friend’s parents were obsessed with them, so I watched them play, but when my turn came up they failed to hook me or even interest me all that much. The good news, though, is that I’m enjoying them quite a bit more as an adult, although now that I’ve completed all three I have little interest in going back and bothering with their gem challenges (destroy all crates containing fruits, do not die, etc.) and time trials. After all, I’m not a masochist.

That said, I did try to do as many of the bonus stages as I could. In the first game, they’re unlocked by finding three similar icons that are hidden in specific boxes, whereas the other games tend to be more lenient and don’t require as much ‘work.’ What’s nice is that, if you die during a bonus area, zero lives are taken away, making it easy to keep retrying them.

The first Crash Bandicoot game is by far the most difficult, and is full of difficulty spikes. These come in the form of very challenging and oftentimes cheap levels like Native Fortress, Road to Nowhere, Slippery Climb and The High Road. What makes these stages so hard is that they’re very demanding, and expect near perfect platforming from the player. Their stage design is also very treacherous in nature, with both The High Road and Road to Nowhere being notorious for their limited platforms. Those two take place on rickety old bridges that have almost completely lost their boards. Your job is to jump from one section to the next, while dealing with the occasional enemy and worrying about the colour of the boards you’re about to land on (as some drop faster than others). There is an alternative, though, because these levels allow you to jump onto and walk along the ropes that hold their bridges together. That’s still not an easy proposition, however.

Crash Bandicoot is also more of a traditional platformer than Cortex Strikes Back and Warped are. That’s because the other two tend to add more variety into the mix, which helps alleviate some of the tricky platforming. Neither one is easy, though, so don’t get the wrong impression. They are, however, definitely not as difficult as their forefather is.

The second game — which forces the player to find a pink crystal in every stage — has more creative levels, including several in which you ride animals like a polar bear and a tiger. It also features a jet pack that has wonky controls. Furthermore, its final boss also incorporates that same jetpack, and is one of the easiest final encounters I’ve ever come up against. What’s weird is that the bosses before him are noticeably more difficult, including the second to last one which is simply awful.

Then again, some of the bosses in the first and third games also leave something to be desired, thanks to some questionable design decisions and wonky mechanics.

Moving on, it’s important to note that Crash 3: Warped is the most creative and varied of the bunch. It throws the player into a time machine of sorts, wherein Crash and Coco must explore differently themed worlds. This means going underwater and riding some sort of submersible vehicle, hopping into a WWII-style fighter plane and riding a motorcycle. It’s the latter one — the motorcycle — which appears most often, and most people are going to hate riding it. I say that because those stages are not only challenging, but also control poorly thanks to some very loose driving controls and related physics.

Overall, it’s the third game that stands out as the worst of the trio, although it’s not bad by any means. While some folks seem to dislike the plane stages, I appreciated them because they helped break things up and weren’t too frustrating. I also didn’t hate the motorcycle levels as much as everyone else seems to, though I’d never call them good. Regardless, I agree with the masses and consider that to be the worst one, with Crash 2 being the best and the first game ending up in the middle. If it wasn’t so cheap and frustrating, it maybe would’ve placed higher. 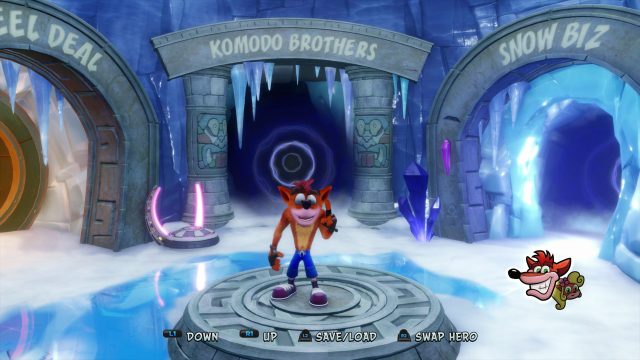 As a remaster, the Crash Bandicoot N. Sane Trilogy is pretty impressive. It’s a pleasure for the eyes, can be really fun to play, and was obviously made with a lot of love. Still, Vicarious Visions’ effort isn’t perfect. Those who play through it will encounter the odd bug, get frustrated by the occasional bit of wonky hit detection, and perhaps also find themselves angry with the changes that have been made to Crash’s jumping animations. It could also be said that more work should’ve been put into making this more of an experience than it is, which is something that could’ve been accomplished by adding concept art, historical videos, making of featurettes or something of that ilk. As it stands, there’s nothing like that here.

Still, it’s not like this is an expensive release, and at $40 USD it’s practically a steal even with its faults and shortcomings. As such, fans of the series and those with any amount of interest owe it to themselves to check out the Crash Bandicoot N. Sane Trilogy. It may not be perfect, but there’s a lot to love.

**This review is based on the PS4 exclusive, which we purchased.**

Crash Bandicoot N. Sane Trilogy Review
It's obvious that a lot of love and attention to detail was put into remastering each of the three games found in the Crash Bandicoot N. Sane Trilogy. However, some questionable design choices hold it back from absolute greatness.
Visuals86%
Audio83%
Gameplay81%
Storyline72%
The Good Stuff
The Not-So-Good-Stuff
2017-08-03
81%Overall Score
Reader Rating: (0 Votes)
0%