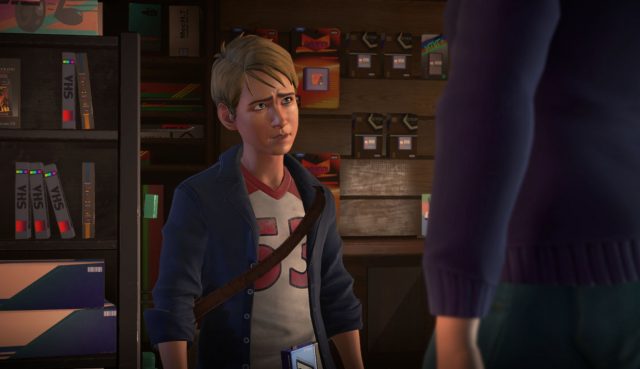 Warning: This review will contain spoilers from the first two episodes of Marvel’s Guardians of the Galaxy: The Telltale Series.

When we last caught up with Starlord, Gamora, Rocket and the rest of the Guardians of the Galaxy, a new discovery threatened to turn everything inside out. Now, with “More Than a Feeling,” the third episode of Marvel’s Guardians of the Galaxy: The Telltale Series, we’re able to step inside said portal and discover just what awaits on the other side. This, of course, helps lead to further discoveries about the Infinity Forge, including why it’s so sought after.

Following the events of the second episode, Peter “Starlord” Quill and his green skinned friend, Gamora, find themselves in a strange and surreal dream world. It’s there, where the Infinity Gauntlet’s power is stronger, that bothersome events from their past lives haunt them while also propelling them forward. This includes an opening act wherein Peter finds himself back on earth with his mother, who’s taken him to an electronics store to wait while she fills her cancer-related prescriptions next door. While offering us further insight into Peter’s trials and tribulations, as well as the grief that still haunts him to this day, this scene also presents some important choices that relate to both his relationship with his mother and his dealings with bullies.

Gamora isn’t left out, though, as she ends up finding herself in a dream state that harkens back to one of her most important missions. One that was given to both she and her sister by their ‘father,’ Thanos, who wishes for them to not only kill an enemy general but steal an important item from him as well. Of course, this is easier said than done as is always the case in the world of comic books and superheroes, and when things don’t go as planned it creates a rift between the two sisters that may never be closed.

What More Than a Feeling does for Telltale’s Guardians of the Galaxy series is push the narrative forward. It does this by making the characters face stressful memories, before creating more emotional turmoil that must be settled through dialogue and related choices. All the while, the team pushes forward and makes important discoveries related to the Infinity Gauntlet, the Kree and more. This means that there’s more dialogue and emotional content than there was in previous episodes, which may not appeal to those who are of an action first mentality.

While lots definitely happens during this third episode, it’s arguably the weakest of the bunch because the gameplay just isn’t all that exciting. There’s tons of talking and character development, which is appreciated, but when the controls are handed over to the player there’s little to write home about outside of a couple of solid action sequences. Most of the gameplay consists of walking, talking and assuaging feelings, and there’s also a rather boring puzzle that is as tedious as it is mind-numbingly easy to solve. The good news, though, is that the latter leads to a major choice that will surely play out during the series’ remaining two episodes.

That said, the Guardians of the Galaxy are always fun to listen to, and some witty dialogue makes up for some of the tedium. Still, this third episode isn’t as comedic as its predecessors, as only a couple of lines were really laugh out loud funny. The group’s iconic soundtrack also isn’t used as well, although it still factors in, as does a bit of dancing. So, too, does a bit of stuttering and slowdown during cutscenes, which is normal for Telltale games.

In the end, the best way to describe Marvel’s Guardians of the Galaxy: The Telltale Series‘ third of five episodes is to call it both decent and necessary. Although it’s nowhere near the most riveting or memorable hour or more of gameplay that Telltale has ever crafted, it serves a purpose and moves the story forward in some interesting ways.

**This review is based on the Xbox One version of the game, which we were provided.**

Marvel's Guardians of the Galaxy: The Telltale Series - Episode 3: More Than a Feeling Review
The ground that More Than a Feeling covers is important, but some questionable design decisions have led to it being the weakest of Telltale's first three Guardians of the Galaxy episodes.
Audio70%
Visuals70%
Gameplay60%
Storyline77%
The Good Stuff
The Not-So-Good Stuff
2017-08-29
68%Overall Score
Reader Rating: (0 Votes)
0%