NOTE: This review may contain some mild spoilers for, “The Defenders.” That said, the review is written to accommodate those who have not yet watched the miniseries, and as such, will avoid discussion of major plot developments.

After over two years of buildup, between two seasons of Daredevil, and a season apiece for Jessica Jones, Luke Cage and Iron Fist, Netflix’s quartet of Marvel Cinematic Universe shows is coming together in Netflix’s long-awaited crossover miniseries, The Defenders. While quite different from the original line of Defenders as they first existed in Marvel Comics lore, where their initial 1970’s roster comprised the likes of Doctor Strange, The Hulk, Namor the Sub-Mariner and, believe it or not, the Silver Surfer, this new line of Defenders smartly fits into Netflix’s more adult corner of the MCU, even as the miniseries that depicts their alliance seems pretty disinterested in repeat go-arounds with this particular iteration of the team.

What’s also important to note is that, despite being advertised as an Avengers-esque culmination of the events behind Marvel’s current crop of Netflix shows, The Defenders doesn’t quite feel like that in the end, at least not completely. Instead, this eight-episode miniseries feels more like a light-hearted dessert to follow four dramatically dense and emotionally heavy MCU street dramas, one that provides good, action-packed fun for Marvel fans, but disappointingly lacks a more poignant reason to bring its four urban superheroes together. This certainly doesn’t amount to a bad time, especially if you’re already well invested in the stories of the MCU’s Daredevil, Jessica Jones, Luke Cage or Iron Fist incarnations (or, ideally, all of them), but it’s best to approach The Defenders with adjusted expectations, since it’s definitely not another The Avengers-level master stroke for the MCU’s continued evolution. 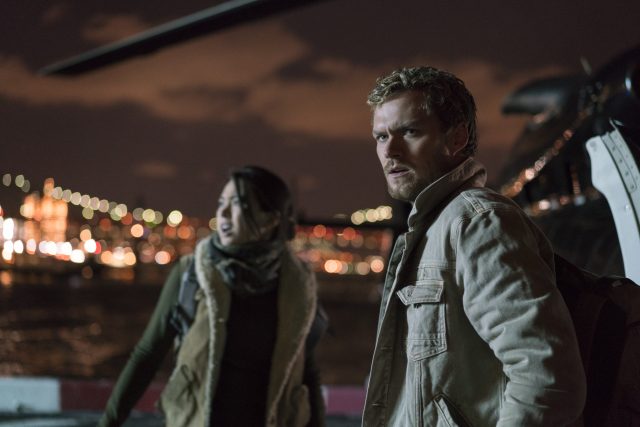 Seeing as the current timelines of Marvel’s Netflix shows all unfolded relatively close together in MCU canon, The Defenders picks up only a short while after the conclusion of Daredevil’s second season, and the debut seasons of Jessica Jones, Luke Cage and Iron Fist. Among these shows, Daredevil and Iron Fist were the shows that laid the biggest foundations for this crossover, particularly since their returning quarries, The Hand are firmly front-and-center as villains this time, led by Sigourney Weaver’s standout original new baddie, Alexandra Reid. That said however, supporting characters from Jessica Jones and Luke Cage still show up in The Defenders, including Malcolm Ducasse, Trish Walker, Misty Knight, and of course, Claire Temple, who join expected supporting allies like Colleen Wing, Karen Page and Foggy Nelson in New York’s biggest battle to date against one of the deadliest villain factions in Marvel lore.

Since Jessica Jones and Luke Cage didn’t have any story arcs that truly dealt with The Hand in their respective shows, they feel a bit more like merely reluctant tag-alongs in The Defenders, but despite that however, it’s once again Iron Fist that feels like the weak link in the team. Finn Jones’ much-contested portrayal of the Living Weapon from Iron Fist does see some improvements in The Defenders, namely with improved action choreography, but it still feels like the MCU’s Danny Rand is an acquired taste that’s taking too long to acquire. He’s still too loudmouthed, reckless and irresponsible in contrast to the rest of the team, which might have been fine, had Danny not been such a focal point in the storyline. Most of The Hand’s current agenda centers directly on Iron Fist, and that only draws more attention to the fact that he’s just not as appealing as the other characters at this point. As it stands, only Daredevil feels both seamlessly fit into The Defenders’ storyline, and flawlessly executed in terms of some long-awaited payoffs to his ongoing solo series storyline that finally come in this miniseries. I imagine the fact that Daredevil’s current showrunners were the ones that oversaw The Defenders had quite a bit to do with that.

Still, for what The Defenders lacks in depth, it at least compensates with a great sense of excitement. The quickened eight-episode length means that the show can spend less time meandering and more time getting into the action, at least eventually. The Defenders does have a bit of a slow start in its first couple of episodes especially, particularly since the titular team doesn’t even properly come together until around the third episode or so, but once the proper conflict is set into motion, the series is generally pretty breathless and exciting. It also injects a bit more humour and wit into the otherwise rather dark and gritty Netflix dramas of the MCU, playing nicely with the dynamics of introducing these four lead heroes, whose supporting allies have several personal connections, but among the heroes themselves, only Jessica Jones and Luke Cage initially know each other, from the events of Jessica Jones’ first season.

It’s likely that The Defenders was looking at the more simplified story formula of The Avengers in terms of how it plays out, and I suppose that’s fair enough. This is the main reason why you have to come in with adjusted expectations though, since The Defenders has a very different set of priorities than the four solo Netflix shows that preceded it. Whereas Daredevil, Jessica Jones, Luke Cage and Iron Fist all aimed to be deep and complex character dramas with rich adult themes (even if the former three realized this better than Iron Fist for now), The Defenders, by contrast, is more proudly comic book-y and fantastical. There’s of course some solid humour from characters like Jessica Jones and Luke Cage suddenly getting thrown into this insane conflict with The Hand, a ninja squad that can literally keep resurrecting their dead agents, but were it not for some more moments of rather brutal violence, The Defenders almost feels like it’s hewing closer to the style of something like Agents of S.H.I.E.L.D., where it’s not quite purely for adults, even if its subject matter still feels just a bit too intense for young children.

So, what we’re left with most of all in The Defenders is super-powered wish fulfillment for Marvel’s established fanbase. Considering that this is supposed to be the culmination of four deep, multi-layered Netflix dramas, some may be disappointed that The Defenders aims lower than they would probably expect it to. That said however, it’s still perfectly valid to enjoy this series as good simple fun for superhero enthusiasts, especially if you’ve already found plenty to enjoy in the four previous MCU-set Netflix shows. This miniseries’ final result does seemingly leave the door open for several interesting new chapters in Netflix’s darker corners of the MCU as well, particularly since Daredevil, Jessica Jones, Luke Cage and Iron Fist all have new seasons on the way, even if The Defenders itself currently looks like it’s going to stand alone. A pessimist could reasonably declare that Netflix’s current foursome of leading Marvel heroes (The Punisher notwithstanding, since his own solo Netflix series has yet to premiere for now), function better apart than they do together, but if this is indeed their one team-up effort, I suppose it’s also true that it definitely could have been a lot worse.