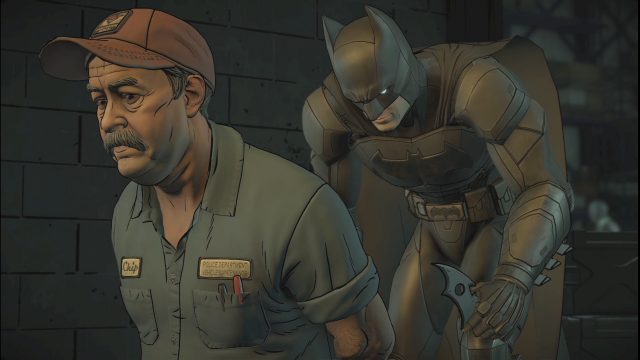 *Warning: This review will contain spoilers from the previous episode.*

The last time we took control of Telltale’s Caped Crusader, he came face to face with a longtime family foe, and learned that all was far from well in Gotham City. Now, with the Riddler indisposed, Amanda Waller controlling the investigation and Commissioner Gordon left feeling like an unwanted third wheel, there’s lots to dissect and figure out. Time is a luxury, though, and it’s not made available to anyone involved, as crime quickly escalates again with a new sect of thugs being responsible for the carnage.

In “The Pact,” Batman: The Enemy Within continues its young Batman narrative, thrusting Bruce Wayne and his alter ego into dangerous situations. It isn’t helped that he’s being professionally blackmailed by Waller, who confirmed that she knew his true identity at the end of the first episode. How she knows it remains to be discovered, but the fact that she does is scary enough. After all, if the public ever found out that the billionaire playboy and industry mogul was behind the mask, chaos would result.

It’s during an investigative encounter with the bad guys that our black-clad hero comes face to face with the first of his new adversaries, that being a hulking brute with some noticeable facial hair. It isn’t long, however, before more familiar villains enter the picture, and enlist our help. Thus, decisions become based on how much you’re willing to risk and how far you’re able to go. Being undercover is one thing, but working with the enemy — a sadistic one at that — is a different entity entirely. People can, and likely will get hurt, and things can change at the drop of a dime.

Truth be told, it’s nearly impossible to really dissect or explain this episode without spoiling things. This is a big episode, you see, and even though almost all of its faces are familiar, some are new to this story and are best left unnamed. Just know that John Doe, aka. The Joker, plays a large role herein, and that he’s shaping up to become an even bigger player.

Although there’s some much deserved downtime and necessary recouping, Bruce is kept on his toes for the majority of this lengthy engagement. So much so that he’s forced to hide his injuries and pretend to be in fine form when he is, in fact, feeling quite the opposite.

Most of all, Bruce’s morals are tested. It’s these decisions that really hurt him, too, much more than the cuts and bruises that hobble him ever could.

The last episode, which acted as the debut for The Enemy Within, aka. the second season of Batman: The Telltale Series, was quite good itself. This one ups the ante, though, and comes away well upon doing so. Not only is it memorable, but it’s also chock full of interesting decisions, which are complemented by some visceral combat and intriguing fan service. Telltale has really tapped into something of quality here, and it just keeps getting better.

Unless you’re waiting for the full season to release, or hate Telltale games, this is something that should definitely be on your radar.

Batman: The Enemy Within - The Telltale Series - Episode 2: "The Pact" Review
Batman: The Enemy Within carries on with a very strong second episode. One that not only offers lots of fan service, but also features a good mix of challenging decisions and visceral action.
Storyline84%
Audio86%
Visuals87%
Gameplay85%
The Good Stuff
The Not-So-Good Stuff
2017-10-12
86%Overall Score
Reader Rating: (0 Votes)
0%