Launching a new IP is tough, and doing so as a launch title is surely even harder. After all, not only do you need to think about making a good game that is fun to play and will be remembered positively, but you also have to find a way to work in effects and features that show off the new console’s capabilities. This surely affected Knack during its development, and the result was something best left forgotten: a bland, boring and unnecessarily frustrating action-adventure game that didn’t do much for anyone, and became meme-worthy as a result.

Now, several years after the launch of the PlayStation 4, Mark Cerny has returned with what is said to be an atonement for the first game he ever directed. A sequel, dubbed Knack II, which Mr. Cerny (who helped create the console his games are exclusive to) hopes will make good for the misstep that its predecessor was.

Unfortunately for those involved, that isn’t what has happened. While Knack II is definitely better and more polished than that which came before it, it’s still not a very good game, or all that fun. In fact, like its predecessor, this budget-priced effort becomes a slog prior to its halfway point and will likely leave you wishing that you were playing something else.

With a mostly unchanged cast of major players, Knack II aims to right its developers’ previous missteps by dropping players into the midst of an even larger and more critical conflict. One with historical significance, and an agenda that could see this beloved world fall victim to giant machines and those who control them. 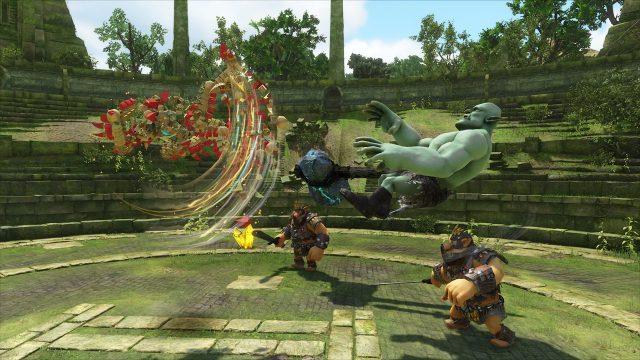 Several years have passed since Knack was last called into action, but things are not all well. Recent discoveries and strange events have led people to once again fear the High Goblins, with whom humanity did battle ages ago. Back then, one warrior helped cast the evildoers out, or so everyone thought, but their technology remained and laid dormant underneath heaps of dirt, dust and overgrowth.

Now, for whatever reason, the High Goblins have started to return, and the rumblings of their machinery are just the beginning of what’s to come.

Things begin during another attack on Newhaven, during which Knack must use his powers of size and strength to fight against the large Goblins and their even larger robots. He’ll do so by jumping, smashing, kicking and swinging, and will also use the environment to his advantage during QTEs. This isn’t how every chapter will go, though, because this is merely a look into the future before things go back to the beginning and start anew. What’s weird, though, is that this chapter is repeated almost to the T later on, forcing you do to the same things twice.

At the beginning lays a slightly older Lucas, who’s coming to grips with what happened in the past. He, his best friend (Knack, the creature who’s made entirely out of relics), and his favourite uncle are all working together in Nathan Drake fashion. By day, they’re exploring long lost areas by float plane, and by night they’re reminiscing about the past and spending quality time together. That is, until they spot something worrying and the story of the old war comes into play.

As expected, it’s Knack who must come to the rescue of the citizens of Newhaven, but he won’t do so alone. First off, Knack II now supports co-op, allowing a second person to join in on the action. That’s not all, though, as new faces (in the form of a mysterious tribe with a hidden agenda) also factor in, lending their assistance through training courses and other such wisdom.

The problem here isn’t the set-up. At its core, Knack II offers a slightly interesting storyline that could easily support a decent action-adventure or beat ’em-up game. The problem is that the gameplay that propels this narrative is simply too basic, uninspired and downright boring to enjoy. Although our size changing hero has had some upgrades since we last met him, he’s still very much a puncher and a kicker, with the odd super punch and hook shot thrown in for good measure. This lack of imagination thus boils things down to a repetitive cocktail of basic combat and mediocre platforming that just won’t do it for most.

Along the way, this strange-looking protagonist can also upgrade himself using both environmental and metallic powers. This simply means going up to a block of ice, hitting it and becoming frozen, or using your magnetic charm to attract heaps of metallic pieces. One turns you elemental, and aids with puzzles that require things to be frozen, while the other makes you a lot stronger, and a lot heavier as a result. Puzzles that require you to be metallic often involve lifts, and task you with leaving your metallic exoskeleton on a switch or platform while using Knack, himself, to reach a higher vantage point.

Sure, Knack II has its moments, and does get better as it goes along. It just rarely ever changes, or offers much in the way of variety. If you’re not kicking and punching an onslaught of enemies, you’re walking around and exploring environments that are far from memorable. A lot of the game is also based around changing sizes, which forces players to get used to switching from big Knack to small Knack on the fly. In fact, progression is often blocked behind walls (and related puzzles) that force you to become tiny and move along the ridges of exposed bricks.

This happens ad nauseam throughout the seven to ten hour-long campaign, and like the combat, it gets to be very boring.

On the presentation side of things, Knack II is an improvement over its predecessor, with a more colourful and even more cartoon-y visual style. It looks pretty good, runs rather well and also sounds decent, but there are some caveats. The environments leave something to be desired, because many feel like better-looking versions of something from a PS2 game, and the characters can become annoying after a while. So much so that one could be forgiven for breaking his or her rule about not skipping cutscenes.

Alas, Knack II is an easy skip. Despite not being bad, per se, it’s also not a good game in any way, shape or form. It simply exists, hovering over the fulcrum of mediocrity, swaying this way and that. Sure, there are things to like about it, such as its couple of minigames and the odd moment where its mechanics combine to create a bit of enjoyment, but it’s just too simple, formulaic and downright dull to be much fun. Thus, it ends up becoming a slog that could end up making you hate yourself for wasting both your money and your time.

**This review is based on the PS4 exclusive. We were provided with a review cop**

Knack II Review
Knack II attempts to right what its cruddy predecessor did wrong, but doesn't do enough to stand out, or offer much in the way of enjoyable gameplay. As such, it's yet another bland, boring and ultimately forgettable title starring this dull creature.
Storyline51%
Audio58%
Visuals75%
Gameplay40%
The Good Stuff
The Not-So-Good Stuff
2017-10-12
49%Overall Score
Reader Rating: (0 Votes)
0%