It was three years ago that Detective Sebastian Castellanos answered the call that would forever change his life. Said disturbance ended up not only irrevocably altering him as a man, but also threatened his sanity. It’s fitting, then, that what unfolded throughout The Evil Within was centred within the confines of a creepy old mental hospital.

The years since have not been kind to the now former policeman, who’s haunted by nightmares that have sent him to the bottom of many bottles. It’s here, three years later, where we resume his story, as he sleeps one off while resting his head on a barkeep’s table. ‘Sleeps one off’ is putting it kindly, however, given that it’s not a pleasant or restful experience. Instead, Sebastian finds himself drawn to yet another haunting memory, that being the house fire that consumed both his home and his young daughter.

It’s upon waking from this terrible, albeit familiar nightmare, that the tormented man realizes he’s not alone. Sitting across from him is Kidman, a familiar face and former ally, who comes bearing shocking information. News, you see, that centres upon the daughter who was once considered lost, but is apparently alive within another realm. Though, while she may be living, she’s likely not safe, after having disappeared or potentially even been kidnapped. Those who were sent in to locate her have also gone missing, for lack of a better term, as though their bodies remain in our world, their whereabouts inside of this alternate reality happen to be unknown.

This is the set-up that both opens and drives The Evil Within 2 over the course of what is a twelve to fifteen hour-long campaign. One that is not only nightmarish, but also disturbing in its design, not to mention chock full of disgusting abominations. It is, though, a survival horror game through and through, meaning that those who are familiar with the genre will have a decent idea of what to expect.

As Sebastian enters the STEM world in hopes of saving his beloved daughter, he goes in knowing that whatever lays in wait cannot be good. Lily is, after all, considered to be the Core — a pure creature whose innocence allows her to power what Mobius has crafted. That is, Union, a STEM world unlike any other, which takes the form of typical, small town America.

This narrative unfolds over the course of approximately seventeen different chapters, each of which is full of disturbing danger. What’s both interesting and strange about The Evil Within 2, though, is the fact that the first ten or so chapters are somewhat different from the rest, in terms of narrative focus.

When Sebastian first enters Union, he’s greeted by murder in suspended animation. One of the Mobius operatives he’s been asked to connect with has met an untimely end, and the moment of his bloody death has been frozen in time for all to see. It’s a strange, creepy and rather unique sight, which is considered art by the man who made it all happen. A photographer by trade and murderer by hobby, Stefano Valentini gets off on preserving his gory pursuits for all to see, and it’s he who quickly becomes the focus of the first ‘half’ of the game. 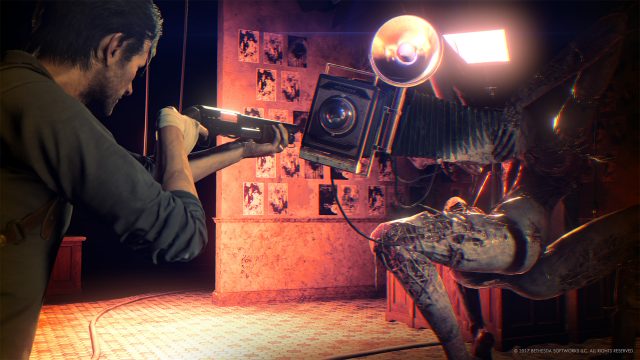 In pursuit of the photographer, players will find themselves exploring the streets, alleyways, businesses and deserted homes of Union through open world means. Objectives will put points on the map, but exploration is allowed and even encouraged, with ammunition (and special weapons, like a crossbow) being hidden throughout the town. Secondary objectives also factor in, but these quests are limited in number. They are, however, decently lengthy and involved, and offer some nice rewards upon completion.

Union isn’t huge, but it feels big enough, especially when you’re spending most of your time stealthily crouch-walking your way through it. Humanoid creatures roam the streets, hide in bushes and carry bodies to large piles that exist for unknown reasons. Taking one’s time and sneaking around these monstrosities, whose heads explode to reveal creepy tentacles that move to and fro independently, is necessary as a result. After all, in true survival horror fashion, The Evil Within 2 restricts one’s ammunition. In fact, it’s so scarce at times — especially during the latter portion of the campaign — that it can become quite frustrating. I had a hard time with one boss, not because it was difficult, but because I couldn’t find anything to shoot at it and had to run around in circles while hoping that something would appear.

What’s nice is that the in-game map is easy to read, and helpful to boot. It’s also designed well, with interesting locales to scour and some appreciated safe houses to regroup within. These safe houses are usually maintained by an ally, who’s there to talk, lend a hand or offer a side quest. What you’ll also find in these rooms and buildings are materials, save spots, coffee makers and work benches. The coffee exists as a way to completely heal oneself, whereas the work benches are used for crafting ammunition and health items, as well as special weapons.

This world fractures and changes, and one must sometimes venture into its ‘Marrow’ (a system of tunnels that lead to each of its different regions) to get from point A to point B. The Marrow is a dangerous place in its own right, and it presents some pretty hectic encounters. Safe houses and side quests also factor in down there, offering a change of pace, even if the sterile corridors are kind of boring.

The old adage of “Shoot it in the head!” applies throughout The Evil Within 2, as that’s the best (and sometimes only) way to bring real pain to its enemies. Granted, some don’t exactly have heads, though they usually offer some sort of approximation of said bucket.

Sebastian is able to do battle with these deformed beings by using cover, bullets and elemental bolts to his advantage, and is also able to sneak up and stealth kill most basic foes. For the most part, this all works well, but the hit detection can be questionable. I can’t count the amount of times that I cursed at the game, because it’d failed to register a shot to the head, shoulder or torso, and had wasted one of my bullets as a result.

The best advice that I can give is to give it a second before you shoot again. If you’re using the pistol, shoot, wait momentarily, then shoot again. This is easier said than done, of course, but it should help you avoid wasting ammo.

What’s nice is that Sebastian also has a melee attack, though it’s pretty weak unless upgraded. He can use his knife for stealth assassinations, or lightly damage enemies while preventing himself from being hurt. Axes can also be discovered, and these allow for one hit kills, but break after just that one use. You’ll see them lodged in corpses, or in the hands of enemies who’ll try to use them against you.

The aforementioned upgrades are once again handled in the nurse’s realm, and can be purchased using green goo that is either found in bottles or picked up from downed enemies. Red goo also exists, and it’s used to unlock locked pathways that lead to even better upgrades in each of the several available disciplines (health, regeneration, stealth, combat, shooting). 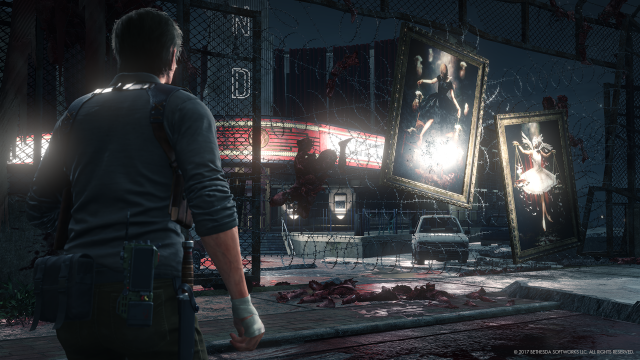 The Evil Within 2‘s nurse is the same as the one from the first game, and she’s found by traveling into mirrors that lead to Sebastian’s safe place. His room, as it’s called, takes the form of a police precinct, and allows him to take a break and regroup. Inside of this room there’s a slide machine (which lets you look at collectible slides, each of which tells part of the story), a workbench (for crafting, but you can also craft on the fly, though it uses more resources) and a place to save. The nurse’s area is attached, but separate, and is actually accessed by sitting in a nightmarish chair that transports Sebastian to her realm. There, the upgrade map can be used, and lockers can be opened so long as you’ve found a key. There’s also a fun shooting range, which rewards one for achieving high scores in each of its difficulty-based challenges.

The above-mentioned locker keys are hidden throughout Union, and are found inside small, breakable statues that take a religious form. Upon breaking them, you’ll receive one standard key, which can then be used to unlock any of the game’s many lockers. Behind each one lays something helpful, be it a large amount of green goo, ammunition for Sebastian’s pistol, assault rifle and shotgun, or weapon parts that he can then use to upgrade his arsenal.

Once the photographer’s storyline has come to a close, the focus then shifts to another antagonist, and the pace quickens a bit. This last ‘half’ of The Evil Within 2 is definitely shorter than its predecessor, and it’s also not as good, nor is it as player friendly. Ammunition becomes very scarce, while enemies sometimes increase in numbers, and the intriguing town of Union becomes a bit of an afterthought.

Spread throughout all of this are several boss battles, which, for the most part, do the job without excelling or standing out. It’s generally just a matter of aiming for the head, and it isn’t until the neat-looking final boss that any of them really become notable. This sequel also recycles bosses from the first game, and makes you do battle with them one after another in a gauntlet of terror type of way. 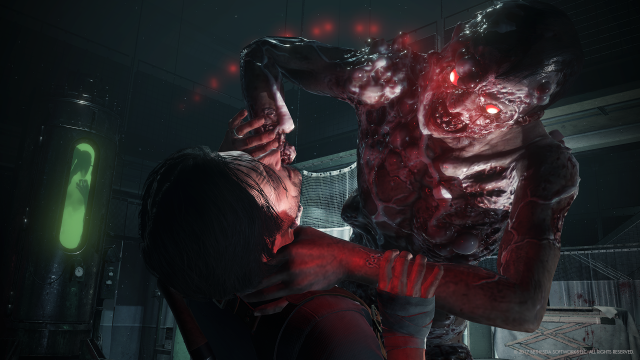 Visually, The Evil Within 2 is hit and miss. Although the original game was gritty and dirty looking, its follow-up tends to be cleaner and more colourful. Its environments look nice, and Union, itself, offers some nice details, but things are not idyllic here. Where it stumbles is with regards to some sort of blur filter that exists. Certain textures — especially those of random items that Sebastian can pick up and use — also fail to load in at times, while his and certain others’ character models tend to look waxy, for lack of a better term.

The audio performs a bit better, but while the music stands out, the voice acting and the writing that propels it sometimes do so for the wrong reasons. Sebastian will often complain about things he’s dealt with before, or say dumb things that threaten to take the player out of the experience. His voice acting — along with that of some of the others — can also be quite cheesy.

At the end of the day, The Evil Within 2 is a very solid game that is well worth playing if you’re a fan of its genre. It’s definitely an improvement over the clunky game that its predecessor was, but a convoluted storyline, some frustrating gameplay elements and a middling second half hold it back from being great. Still, even with these issues taken into consideration this is a well above average game.

The Evil Within 2 Review
The Evil Within 2 does what every sequel is supposed to, by improving pretty much everything. It is, however, held back by certain faults, and kept from being the great game that it could've easily been given its rather solid mechanics and interesting open world.
Storyline78%
Audio77%
Visuals70%
Gameplay79%
The Good Stuff
The Not-So-Good Stuff
2017-10-24
79%Overall Score
Reader Rating: (0 Votes)
0%