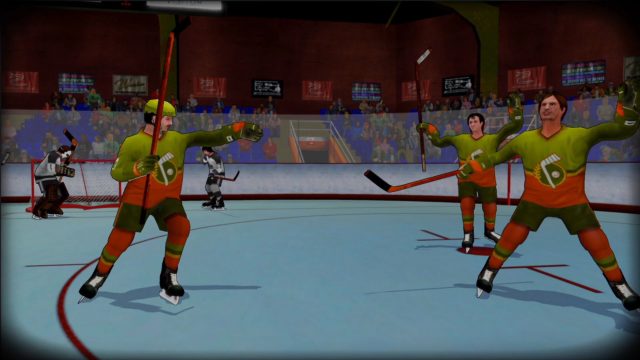 Professional hockey has changed quite a bit over the years. While today’s game is more skill-based, and doesn’t allow for much in the way of hacking, slashing and holding, that wasn’t the case decades ago. In fact, there are many ways in which today’s version is much unlike that of the 70s and 80s, despite being the same sport. Back then, players would battle on the ice with their sticks and their hands, with fights and brawls being far from uncommon. Hell, the Philadelphia Flyers epitomized this type of play, and became known as the Broad Street Bullies for that very reason.

If you’ve seen the movie Slapshot, but don’t follow hockey proper, then you’ll have a good idea of what I’m talking to. Those movies tried to encapsulate their era, and did so well.

Now, several decades removed from Slapshot and its late 70s origins, we find ourselves being taken back to that era through another piece of entertainment. That is, V7 Entertainment’s Bush Hockey League, which has just made its way to the Xbox One console after stops on both Steam and PlayStation 4. Those who’ve played it will know it by another name, however, as this title originally donned the name of Old Time Hockey, before changing to this more fitting moniker. Little has been said about why that happened, but it’s very likely that the officially licensed clothing brand of the same name had something to do with it. It is licensed by the NHL, after all, and creates retro t-shirts for every team.

One thing Bush Hockey League isn’t is officially licensed, meaning that it has nothing to do with the National Hockey League, or any real life organization for that matter. This has allowed the developer to do its own thing, by creating a fictional league which is merely loosely based on things that actually existed. One where penalties are limited, hip checks are rampant, and fighting is A-OK.

What’s also unique about Bush Hockey League is its campaign mode, which is something you don’t often see in sports games. This one even has its own scripted story, in which a team of gin soaked underdogs turns its season around after a terrible start in which their top players were severely injured. Tasked with doing so with a rookie roster that is barely good enough to compete, they face an uphill battle in their attempt to please their ownership by making the playoffs.

The result is a story that picks up part-way into a miserable season, and one that has its fair share of calamity to share. Players will get busted for driving under the influence, ownership will cause problems (and have some of its own) and few things will ever go right for this ragtag group of fools. It’s the player’s job to ensure that they band together, though, and that the Schuylkill Hinto Brews have success in their fight-ridden, 10 team league.

This isn’t a game that penalizes the player for losing — at least not all the time. In fact, one doesn’t even need to win every game, as victory is only required whenever it appears as an objective for any given tilt. You see, Bush Hockey League prioritizes its game-by-game objectives over anything else. Success is then dictated by meeting as many of each match’s goals as you possibly can, be it winning by 6, taking 8 slapshots, killing all penalties or hitting the other team’s star player. These are some of the tame ones, however, as in some ways this is more of a fighting game than it is a hockey game. Objectives will tempt you to instigate fights, brawls and stick fights, and will reward you for winning them or coming away unscathed. Sometimes starting one fight will cause three or four, or even five, so be prepared for lots of fisticuffs. Well, that and stick fights that have players tomahawking each other.

There are multiple control schemes, including a two button option and one that allows for one-handed play if you, say, happen to be drinking a beer. The one that I went with was the one that felt the most natural, and it mimicked EA’s skill stick method, wherein the left joystick controls the player’s movement and the right controls his stick. Through it, shooting is handled by flicking, tapping or rotating the right stick, with hits being controlled through the same input. Passing isn’t, but if it was things would be far too complicated.

While the controls definitely aren’t as precise as NHL 18‘s, or those from any EA game for that matter, they’re not completely awful. That said, it takes time to get used to them, and to adapt to the precision that they lack, which can make getting the perfect shot off awfully tough. They do the job, though, for the most part. Hitting is actually easier than shooting is, but maybe that was to be expected, given that this is a game that is more about fisticuffs than it is about scoring pretty goals. Sometimes it’s hard to line up a player for a proper hit, but it’s not very difficult to catch them while they’re skating and send them cartwheeling to the ice with a hip check, which is accomplished by pressing a button in addition to using the right stick to hit. These hip checks are what rule the game, too, because they’re practically required whenever you need to piss off an opposing player (or four).

The way things work is that, after so many hip checks, a player will get angry and a red fist will appear over his head. If you keep hitting him the icon will change to a stick, which means that he wants to hit you in the head with more than just his fist. Since it’s possible to make every player mad at the same time, it’s common for one fight to turn into several. Once one finishes, the camera will switch to another couple of fighters, stick with them until their battle is over, then move on to the next two. These fights aren’t instigated through hip checks, however, as those are just used to incite anger in the opposition. Once you decide it’s time to fight, you must then use a basic bodycheck against an angry opponent, in order to make him fight.

If a game values fighting so much, you’d think that it would do it well. Bush Hockey League doesn’t, and this is one of the game’s biggest problems. Fighting may be rampant, and may even be required for success, but it simply isn’t fun in any way or fashion. The controls are sluggish, the combat is horribly basic, and stick fights simply reward the first ‘person’ who slams his stick into his opponent’s head. It honestly got to the point where I hoped I wouldn’t get into many fights during games, because it was more of a nuisance than anything else.

It may be 2017, but this title is mechanically stuck in the past, and lacks the polish that is necessary to stand out. With its basic, cel-shaded visuals, incredibly limited animations and rough around the edges style, it’s hard not to equate Bush Hockey League with NHL 94. That game was more fun than this one is, though.

Outside of its story mode, Bush Hockey League allows for some exhibition play, and is the type of experience that promotes playing with friends who share the same couch, or at least the same living room. There’s nothing in the way of online play, but perhaps that was intentional, given the retro vibe that permeates throughout. I played alone, and didn’t have anyone nearby who could’ve played it with me. That said, I don’t think anyone really would’ve wanted to, at least for anything longer than five minutes. There simply aren’t enough things to like about this game, as it’s rough, doesn’t control all that well, and features gameplay that gets old quick. Its announcer also tends to get pretty annoying after a while, which hurts an audio track that does a couple of things right, including using Stompin’ Tom Connors’ ‘The Hockey Song.’

If you’re bored with EA’s annual NHL games and happen to be looking for something different, Bush Hockey League may interest you. Just go in knowing that what you’re going to get is a game that pales in comparison, mechanically and visually, and can easily get boring quickly due to its lack of variety. I was hoping to like this one, and had remembered seeing it posted on social media by friends who were excited for its fight-based change of pace, but it’s simply nothing to write home about.

Bush Hockey League Review
Bush Hockey League stands out as intended, but not always for the best reasons. While it's nice to go back in time, to an era where hockey was more physical than it is today, the game's mechanics and presentation really aren't up to par.
Visuals32%
Audio50%
Gameplay31%
Storyline51%
The Good Stuff
The Not-So-Good Stuff
2017-11-29
41%Overall Score
Reader Rating: (0 Votes)
0%