A “fully redesigned,” sandbox style version of the United States of America will come to consoles and PC at the end of June, when Ubisoft launches The Crew 2. It’s then that fans and newcomers alike will be able to take to the roads, waterways and open skies, to race to their hearts’ content. Or, if one’s not in the mood for such things, one can simply go for a relaxing ride.

“The game’s playground pushes physical boundaries to let driving and open world fans test their skills, solo or with friends, in non-stop competition and exploration,” states the press release. “From coast to coast, drivers will explore America and compete to become the greatest motorsports champion, by collecting a wide variety of exotic cars, bikes, boats and planes, and dominating the motorsports scene on the land, on the water and in the air.”

Those who want something collectible can opt for either of The Crew 2‘s special editions. They include: 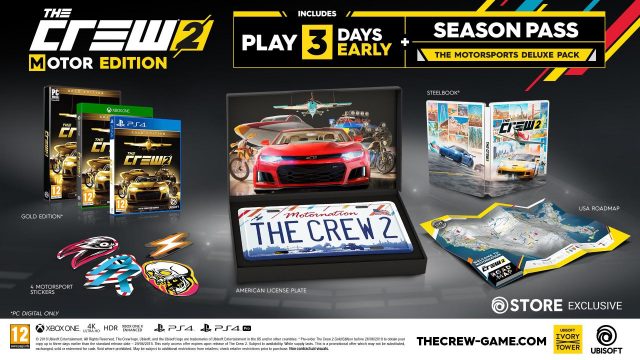 The Crew 2 will race, float and soar its way onto Xbox One, PS4 and PC on June 29th. A rewards program has also gone live within its predecessor, allowing fans to complete challenges in order to unlock content within this sequel.