Tom Cruise has certainly earned a reputation for being eccentric and egotistical, but in recent years especially, it’s impossible to argue with his dedication to his work. Despite being well into his 50’s now, Cruise has continued to bring a massive pedigree to his flagship Mission: Impossible movie series, which now stands as one of Paramount’s most lucrative blockbuster franchises. Despite some confused, problematic beginnings, Mission: Impossible, much like competitor, Universal’s similarly ridiculous yet similarly entertaining Fast & Furious franchise, has surprisingly gotten noticeably better with age. This has allowed it to serve as one of the finest examples of a longstanding action movie franchise that never seems to run out of steam, despite the creeping age of its lead stars. 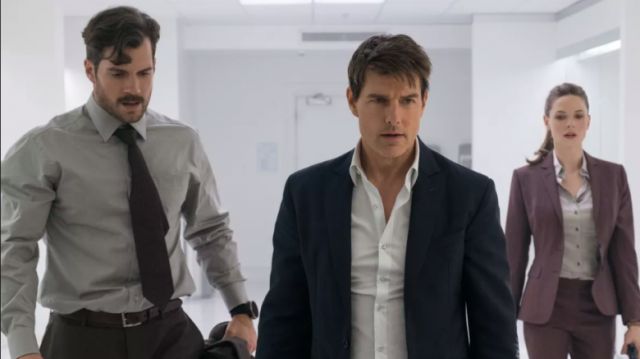 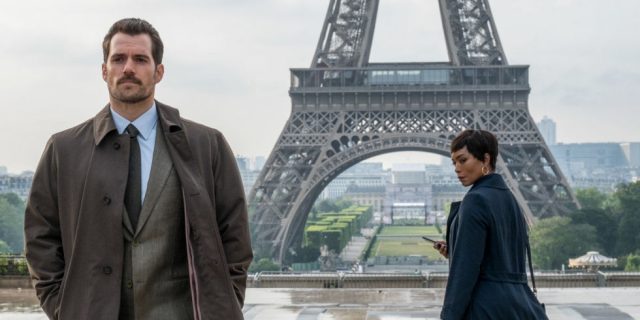 There are a few new faces as well, primarily from the CIA’s end, after the CIA nearly consumed Ethan Hunt’s IMF organization during the events of the previous movie. The main new face is Henry Cavill’s August Walker, a CIA fixer with questionable methods, who is dispatched alongside Hunt on his latest mission, at the request of Angela Bassett’s CIA boss, Erica Sloane. Bassett is more or less a plot device to provide something else to get in the way of the IMF, alongside Lane himself, though Cavill definitely excels as an unpredictable CIA thug who always helps the mission go in interesting, unexpected new directions. It also helps that Cavill demonstrates a great, roughened charisma that constantly makes him a scene-stealer, no doubt incorporating skills acquired during his starring role in the 2015 film adaptation of another 1960’s spy-themed television series, The Man from U.N.C.L.E., a role that Cavill ironically snatched from Cruise after production ran late on Mission: Impossible – Rogue Nation.

Even as we see personalities that we’ve come to expect from any given Mission: Impossible sequel at their usual work in Mission: Impossible – Fallout, they demonstrate an elegance and highly refined panache with their craft that is truly at its best in this latest sequel. There may not be as much novelty as most other Mission: Impossible movies here, which often function as standalone adventures that play to the strengths of each of their highly disparate directors, but perhaps in maintaining the same writer-director, Mission: Impossible – Fallout sheds any redundant elements of the personalities and scenarios that the previous movie crafted, and polishes them to an exceptional sheen. Sure, you’ve seen it before, but when the characters you love are truly at the top of their game, particularly with great new faces like Cavill’s Walker mixing it up with them, it’s impossible to truly complain, if you know what you’re coming for. 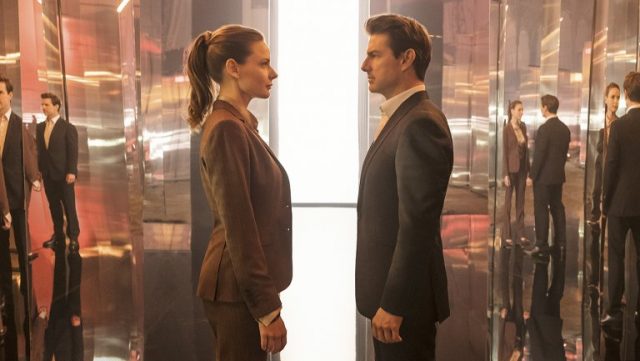 Again, despite echoing the story framework of Mission: Impossible – Rogue Nation before it, Mission: Impossible – Fallout takes that foundation and builds an even more thrilling, unpredictable and exciting product around it. Turns out, Solomon Lane’s apparent capture at the end of Mission: Impossible – Rogue Nation inevitably didn’t stick, and with the Syndicate reforming into a new villainous organization known as the Apostles, Hunt and his team more or less barely dented the incredible criminal force that they went up against in the previous movie. A unilateral decision in the opening sequence thus leaves the Apostles on the verge of acquiring some dangerous nuclear weapons, and thus Hunt and his IMF team are the only means of stopping a global catastrophe, even as the competing CIA doggedly insists on sending their own man alongside them, to both help and hinder the operation along the way.

This latest Mission: Impossible sequel serves as a textbook example of how one can take a seemingly familiar story foundation, and both refine and tweak it just enough so that it feels like something new and especially satisfying, in large part thanks to just how amazingly good the script and directing is. Even when Mission: Impossible – Fallout threatens to start treading old ground more bluntly, it compensates with more awe-inspiring stunts, and more cheeky, yet lovable jokes, and that’s assuming it’s not just playing with the expectations of viewers in some inspired way, and especially dedicated Mission: Impossible fans at that. It’s like a story recipe that miraculously came together even better than the chef possibly intended, surprisingly allowing Mission: Impossible – Fallout to have its cake and eat it too by seeming smart and ingenious, even when it’s so blatantly silly and over-the-top. 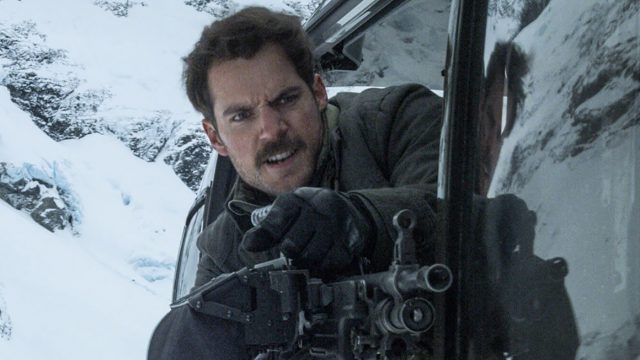 As I said, anything that McQuarrie did brilliantly with his script and direction in the previous movie, he realizes with the same or more brilliance in Mission: Impossible – Fallout. Everything from the heart-stopping stunts to the thrilling espionage surprises is done with universal aplomb, with viewers being perfectly led by a movie that gives them exactly what they expect one minute, but then plays off of that complacency to completely knock viewers’ socks off in the next sequence. McQuarrie also naturally works exceptionally well with Cruise in the lead role, after both Mission: Impossible – Rogue Nation and Jack Reacher, with the director always capturing the perfect, most exciting camera angles and cinematography whenever it comes time to focus on Cruise’s latest death-defying antics.

And yet somehow, despite its clear efforts to bring together all of the best elements of the Mission: Impossible franchise as a whole into one especially delectable melange of action movie excellence, the direction behind Mission: Impossible – Fallout never feels self-congratulating or egotistical. The flashy, yet careful direction instead constantly highlights just how much of an intense labour of love this sequel is, one that continues to have Cruise and his cohorts pushing themselves ever further with each passing series entry. Say what you will about Cruise, but his passion for the material is clear, and even if he seems to be the true mastermind behind Mission: Impossible – Fallout as much as McQuarrie is sometimes, it’s clear that these two are a well-oiled machine that truly are the best in the business when it comes to action blockbusters, even considering the stiff competition from equally celebrated cinematic franchises like the James Bond movies and the Fast & Furious movies. 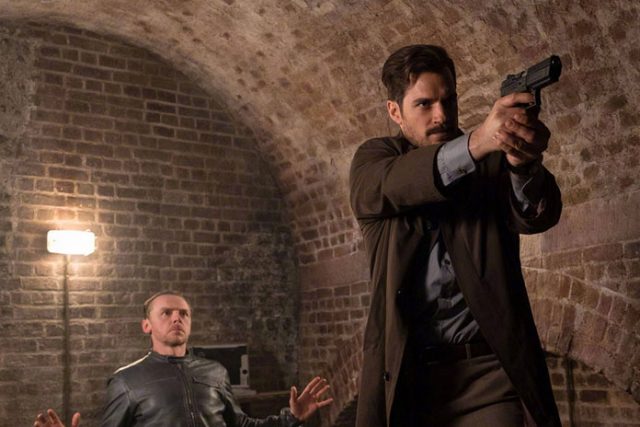 Lorne Balfe composes the soundtrack of Mission: Impossible – Fallout, and despite the fact that he’s been saddled with having to make a lot of thankless scores for unremarkable movies throughout 2018 (specifically 12 Strong, Hurricane Heist and Pacific Rim: Uprising), he does at least manage to compose a standout soundtrack in this particular case. Leaning into emulating the musical style of 1960’s slickness, complete with a lot of drum-based rhythms, old-school brass and strings, and just a touch of modern orchestral flair, Balfe creates a soundtrack that feels very true to the fundamental essence of Mission: Impossible, right down to its TV roots, while still being able to keep up with a movie that’s trying for ever more present-day milestones and accomplishments. This creates a fantastic blend between the best of the old and the best of the new, with the music suite meshing wonderfully with the rest of the presentation, and furthering the feeling that Mission: Impossible – Fallout is constructing itself on the best elements of every one of the franchise’s offerings to come before. 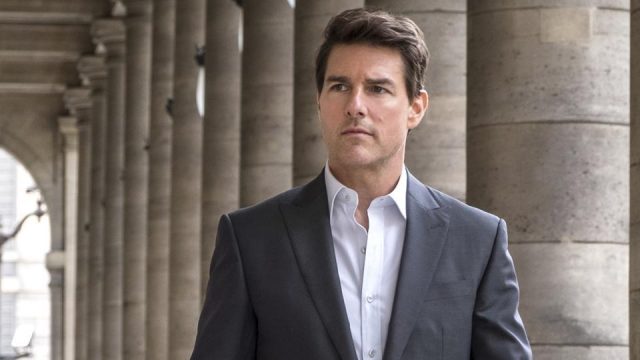 The rest of the audio work is also hard-hitting and intense, as usual. You really feel the bone-crunching hurt behind all of Tom Cruise’s intense stunt work especially, as Hunt continues to get knocked around, dangle off ledges, and basically do anything that most people in their mid-to-late-50’s would probably have a heart attack over if you suggested it to them. Whether you want to admit it or not, the man’s still got serious moves, and the score doesn’t waste a moment to impose the overwhelming suspense and power of the action upon audiences. Like I said, this audio job is really at its best in an IMAX theatre as well, where the raw thrills of the action are ratcheted up even further to provide a highly potent cocktail of gunfights, high-flying danger and all sorts of good-natured civil destruction. Business as usual then, but I’d expect nothing less from any Mission: Impossible movie worth its salt!

Mission: Impossible – Fallout elevates its franchise at every turn, even with its supposedly simple foundation. Like their lead star, the Mission: Impossible movies have proudly and aptly defied their age for well over a decade now, at minimum, and that trend still has yet to be disturbed. Somehow, this latest sequel even has this franchise feeling fresher and more exciting than ever, even managing to oust Mission: Impossible – Ghost Protocol as the series’ former top entry in many respects! Even as the series seemingly falls back on some old tricks, it finds a way to repackage and re-position those old tricks, while adding in just enough new ones, to avoid the nagging feeling that you’ve been on this ride before.

There’s a majesty to the craft of over-the-top action-spy thrillers, and Tom Cruise has become a master at it, with returning writer-director, Christopher McQuarrie also seeming to be his best narrative ally to date as well. It’s recommended that you re-watch Mission: Impossible – Rogue Nation before going to enjoy Mission: Impossible – Fallout, assuming it’s been a while, or you’ve even seen that movie to begin with, but if you’re primed and ready for the spy games that continue from the ashes of the newly-resurrected Syndicate, then you’ll find that Mission: Impossible – Fallout may already be the best action movie of 2018, or at least the best one that doesn’t star a superhero or team of superheroes. 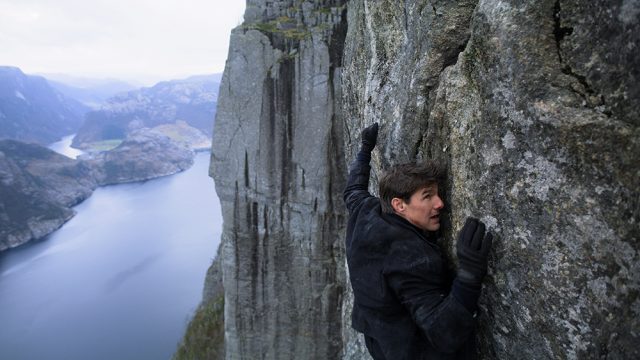 Unlike its predecessor, which seemed to waste several of its best tricks and stunt showcases early on, Mission: Impossible – Fallout just keeps amping up the suspense and tension at every turn, with no real dry spots to speak of. This is an action spectacle that truly doesn’t stop building, racing and pushing for excellence until the credits roll, and to find a blockbuster with such incredibly consistent, ever-growing momentum, even among the ones that star superheroes and superhero ensembles, is astonishingly rare. It would seem then that Mr. Hunt is under no obligation to retire in the near future, and that suits me just fine. Bring on the next mission!