Back in the winter of 2015, DONTNOD followed in Telltale’s footsteps and released an episodic video game that would change how we saw the genre. They did this by introducing us to Life is Strange, which quickly impressed thanks to its mix of strong female leads, deep side characters, excellent storytelling and special powers. Many of us were hooked with the first episode and simply couldn’t wait for more, and the same feelings persisted once the credits ran and we waited for news of a potential sequel.

Of course, it wasn’t a sequel that we first received following the end of Max’s story. Instead of rushing a continuation or a new, altogether different follow-up, Square Enix assigned Deck Nine with developing a prequel. The result was Life is Strange: Before the Storm, which put us in control of Max’s best friend, Chloe, during the time that our time bending heroine was living elsewhere. This was done to explore and explain the special relationship that Chloe had with Rachel Amber, whose disappearance acted as the original game’s main mystery.

Now, more than three years after the original debuted, DONTNOD is back with a full-fledged sequel, that being Life is Strange 2. Things are different, though, because this particular story doesn’t centre upon the two young women, or anyone they seemingly knew. Instead, it’s an all-new tale about two Mexican-American brothers who end up on the run after a terrible event takes place on their front lawn.

Things begin from the point of view of a police officer’s dash camera as he does his daily patrols in a suburb of Seattle, Washington. It doesn’t take long for something to happen, though, because the young, inexperienced (and white) officer soon comes upon an altercation. Shortly after that, the shit hits the fan and something both unexpected and unnatural happens, leaving people with potentially fatal injuries.

What happened isn’t originally made clear, but is eventually shown as Roads, the first of Life is Strange 2‘s five planned episodes, progresses. Before this all happens, however, we’re given the opportunity to get to know our new protagonists, the world they inhabit and the people they love, adore and crush upon. This means stepping into the shoes of one Sean Diaz as he steps off of the school bus to hipster pop music, alongside his best friend who also happens to be part of a visible minority group.

The first part of the playable game takes place in the Diaz family home, where hardworking mechanic and former immigrant, Esteban Diaz is wrapped up in a comical exchange with his youngest son, Daniel. The two rope older brother Sean into the mix, and task him with playing judge to see who will get the last chocolate bar. The result is a lighthearted and optimistic opening, which then evolves into Sean having to get ready for a party while dealing with familial duties (and conversations) involving his father and brother. This means deciding whether to be truthful to Esteban about plans to buy, smoke and drink both alcohol and marijuana, and how to interact with Daniel who’s busy working on his Halloween costume. 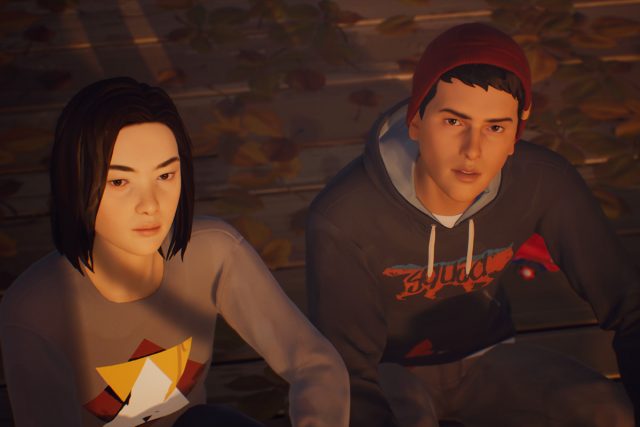 Through all of the above, we’re given insight into a fictional but believable family dynamic where love, trust and great work ethics reign supreme. Esteban is a father with somewhat lax rules, who doesn’t seem to mind that his son smokes marijuana and drinks at the age of 16, so long as he’s safe and smart about it. Sean, on the other hand, is able to be very honest with his father and is also trusted to look after his brother as a result of his maturity.

Following the culmination of a harmless accident, a protective fight, police intervention and the supernatural, Sean and Daniel find themselves on the run. Wanted by the police and fearful of what would happen if he turned himself in, Sean takes to his state’s back roads with his confused and unaware younger brother in tow.

After walking for hours, and even days, the two find themselves near Mount Rainier, in a more picturesque but less racially diverse part of their state. There, they must fend for themselves and make shelter for the night, before venturing out and trying to find food and possibly even camping equipment. It’s during that later excursion where things become more politically charged and Life is Strange 2‘s messages about racism, police intervention, general intolerance and the current state of the United States really come into play. In fact, they all appear so prominently that it’s very “in your face” and suffers a bit as a result. Subtlety could’ve benefited this opening act more, but that’s not to say its messages are wrong.

Saying much more would threaten to spoil what happens within Roads, and what it sets up for the rest of Life is Strange. It was vital to note how politically and racially charged this game is, though, because that’s something that people should know going in. Life is Strange 2 doesn’t hold its punches, and it isn’t afraid to share its developers’ cumulative views on Donald Trump’s America. Of course, it helps that the game is set in 2016, which was a very fitting time for such a story.

It’s probably obvious by now, but in terms of storytelling, this is a pretty interesting and rather deep introduction. Its messages obviously won’t be for everyone because of their political nature, but underneath that lay themes of brotherhood, family and security. Most importantly, this is a coming of age tale about two brothers who have to rely on each other for everything, and who will do anything to protect one another. One that is full of choices and allows you to dictate how things play out based on your decisions.

During the section that is set within the Diaz family home, Sean has the opportunity to either ask for or steal money from his father, and can even donate some of his own to the family pizza fund. The amount of money that one ends up with affects how much they’ll have and be able to purchase later on, after the shit hits the fan. Daniel will ask to play games, and will need to eat, which requires money or theft. Conversely, one can also get Daniel to use his childish charm to beg strangers for food or distract others so that his older brother can steal sustenance. Food isn’t the only thing that can be purchased, though, because so, too, can camping gear and clothing.

One thing about Life is Strange 2 is that its choices and outcomes are more vast and detailed than those of its predecessor. For instance, the game evaluates how much Daniel has eaten, how well he slept and those types of things at the conclusion of its first episode. Thus, it’ll be interesting to see how this will all play out as things progress, and is something new to take into account when making decisions.

In my play through, Daniel had nightmares and didn’t sleep well because of stories I told him about animals hiding in the woods. In hindsight, doing so was a bad idea, but it was the more attractive dialogue choice and it intrigued me. After all, isn’t it an older brother’s job to bug his younger sibling?

Collectibles also take a new form this time around, because Life is Strange 2 doesn’t feature a photographer as a main character. Instead, Sean and Daniel come across little trinkets, souvenirs and whatnot as they progress, so long as the player actually looks for them. Things like keychains, discarded fishing tackle, stickers and cards. Some are easy to find, whereas others are not, and seem to be related to specific decisions. Either that, or my game glitched and didn’t allow the first one to appear. I spent a while trying to get it to, but it never did, even after getting things ready for a fire like the Internet said to. I guess I maybe had to get Daniel to gather the wood to make it appear? I don’t know.

I haven’t talked about the gameplay much because it’s quite similar to that of its predecessors. By that, I mean that it’s a narrative adventure game told from a third person perspective, wherein one must explore different environments and make decisions. There’s lots of exploring and tons of dialogue to choose from, and it all culminates in a unique experience. How one person plays will differ from another, and that will end up making each player’s experience unique.

There is nothing in the way of controllable powers within Roads, but it’s possible that Life is Strange 2 will introduce such things later on. That’s not to say that the supernatural does not exist here, though, because it does. Sean is simply capable of walking, talking, exploring and assisting his brother in a Brothers: A Tale of Two Sons kind of way. He also gets opportunities to teach his brother things, like how to skip rocks, and that’s another thing that is evaluated later on. Meanwhile, Sean’s biggest talent is drawing, and chances to do so occur every so often. That said, the mechanic that allows one to draw — which involves moving the left joystick — is really finicky and actually quite wonky, so I never found it fun. Achievement and trophy addicts will want to make sure to draw at least once per episode, however, because it not only adds to the experience but is also tied into such rewards.

Most of all, it’s important to note that this is a slower episode and isn’t something that those expecting fast, frenetic or even overly involved gameplay will receive their wishes from. Life is Strange 2 has a lot of potential to be great, but it takes a while to get going, and this episode could be called a slow burner as a result. It’s also very heavy handed, so much so that it’s sometimes to its own detriment. What lays underneath these political messages is quite good, though, and incorporates some impressive visual fidelity and well above average voice acting.

While this honestly wasn’t the best episode of Life is Strange that I’ve ever played, this opening to Life is Strange 2 showed a lot of promise and offered some memorable moments. The relationship between its two brothers really stands out, and the quality with which things are presented is impressive.