The Gifted once again got spread across quite a few major storylines this week, though it was the Inner Circle that ended up standing tallest, after a crisis of faith takes place with Lorna right before a major operation. “iMprint” felt a little bit disjointed at times, but still contained plenty of exciting story developments nonetheless, while also adding some critical humanity to both Lorna and the Frost Sisters, in turn further grounding the Inner Circle. The Mutant Underground, by contrast, was dragged down a bit by having to tie in with the problematic Purifier storyline this week, but the more effective mutant struggles for Reed did at least help to make up for this.

After Lorna becomes frustrated with Reeva’s incessant secrecy regarding the exact plans of the Inner Circle, Esme tries to appeal to another side of Lorna to prevent her from leaving. This builds off of a great cold open set many years prior, wherein the Frost Sisters are under the control of a mysterious laboratory, which tasks them with telepathically extracting secrets from other mutant prisoners. The Frost triplets eventually rebel and end up escaping, somehow coming into the employ of the Hellfire Club in the years since, but this clearly isn’t the whole story. Esme ends up confiding this incident in Lorna as well, and almost manages to get through to her, until she accidentally starts humming Lorna’s secret lullaby, proving that she infiltrated Dawn’s mind in order to calm her down and get Lorna’s attention during leisure time. Naturally, this makes Lorna furious, and initially guarantees that she’ll leave the Inner Circle, but like I said, this isn’t quite the full story for the Frost siblings.

This is the point when Esme makes an even bigger gamble, telling Lorna something that she hasn’t even told Reeva; Not only are the Frost Sisters genetically-engineered clones that were built from Hellfire Club veteran, Emma Frost’s DNA (though how this lab had intact DNA from Emma Frost, when she was supposedly killed between the events of X-Men: First Class and the past storyline of X-Men: Days of Future Past, is anyone’s guess), but they were also originally quintuplets, not triplets. Apparently, once Esme, Sophie and Phoebe rebelled and escaped the lab, they did so at the cost of the lives of their other two sisters, Mindee and Celeste, who were kept isolated during the training exercise as collateral. This is a shocking turn (at least, if you’re not familiar with the Stepford Cuckoos from Marvel Comics lore), and one that helps add more depth and tragedy to the Frost Sisters, who remain some of the most uniquely compelling Inner Circle personalities on this show. The loss of Mindee and Celeste not only ties in with various X-Men comic books, where there were originally five Frost Sisters and not three, but also makes a nod to the fact that two of the Frost Sisters are also killed in Marvel Comics lore to eventually result in the Stepford Cuckoos being triplets, although it was Esme and Sophie that died in the Marvel Comics Universe, not Mindee and Celeste.

More drama at the Inner Circle also happens to be stirred up by Lauren and Caitlin, albeit indirectly. Lauren has now recovered from her injuries, and is ready to go on missions for the Mutant Underground again, so she accompanies Caitlin to talk to a psychiatrist that originally tended to Rebecca at the mental hospital. After the mere lie of a family connection to Rebecca spooks the therapist into calling the police, Lauren eventually intimidates the therapist into talking, and Caitlin coaxes the truth out a bit more gently. Apparently, Rebecca isn’t the sweet, unassuming girl that she appears to be, and is actually a psychopath that seems to actively enjoy killing people! This is proven by some security footage that’s apparently too gross to show on television, though Lauren’s and Caitlin’s reactions really do say it all. This reveal with Rebecca is also an interesting way to keep poking at Caitlin’s denial with Andy leaving to join the Inner Circle, something that has now fully strained her relationship with her daughter, after Lauren keeps learning from her shared dreams with Andy that her brother has definitely drank the Inner Circle kool-aid, full stop. There’s also however some obvious foreshadowing that Rebecca may be what ultimately shatters Andy’s faith in the Inner Circle, since it’s now obvious that his new girlfriend is a lot nastier than she appears to be! 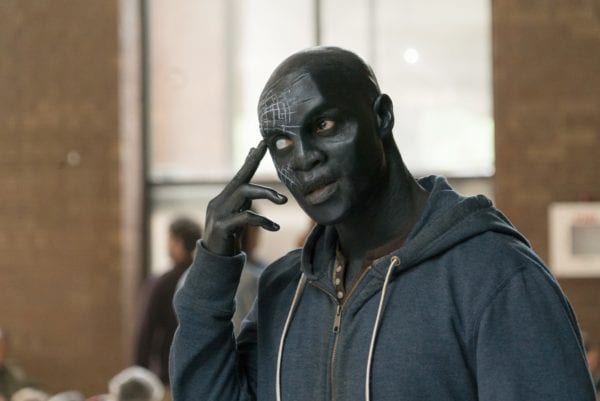 The rest of the Mutant Underground meanwhile goes to Baltimore to assist with some more mutants that have been displaced by a church bombing, apparently instigated by the Purifiers. Once again, this was Turner’s idea as well, which continues to be a frustration with the current direction of Turner’s character. Turner does at least point out that beating up doctors and waving guns around at clinics is a bad idea (no shit, Sherlock!), correctly stating that the Purifiers are meant to fill their ranks with everyday people, not professional killers, trigger-happy idiots and criminals. The fact that Turner tries to claim that PTA members will feel encouraged to join the organization under his suggestions though, only for the Purifiers to then blow up a church, is laughable. Yes, it’s a mutant-friendly church, but the fact that Turner would ever be party to a freakin’ church bombing is ludicrous, even if no one got hurt! As I’ve said before, Turner is an honourable character who believes that he’s doing the right thing, and is motivated by getting justice, not by destruction. Turner’s agenda is an interesting element to bring to the Purifiers for sure, but the fact that Turner’s plans are still way too aggressive and heavy-handed still makes the Purifiers the most frustrating and excessively unrealistic faction on The Gifted, and unfortunately, that hasn’t really changed this week.

The continued aggression of the Purifiers does at least lead to a decent climax however, when Reed, John, Marcos and Clarice all end up cornered in the Baltimore hideout with Shatter, who finally makes a re-appearance this season. After the main chamber gets gassed, the Mutant Underground’s finest have to carry out as many unconscious mutants as they can, with Clarice also unfortunately being knocked out by the gas, preventing everyone from just easily warping away. This also provides a convenient excuse for Reed to try and learn to control his powers, as his super-heating hands become the only means of escape after Clarice falls unconscious. Reed does eventually manage to open an escape route, but Shatter is killed by Turner during the chaos, and many of the church mutants are captured by the Purifiers. This helped to give the Mutant Underground a heavy note to end the episode on, just like the Inner Circle revealing the tragic backstory of the Frost Sisters did. Turner even begins to doubt whether he’s truly doing the right thing after killing Shatter, restlessly holding a piece of Shatter’s skull as the Purifiers take him out for drinks. Reed, meanwhile has become so shaken up by active combat that he finds himself unable to stop his abilities, with Lauren and Caitlin finding him huddled up in a corner, having accidentally disintegrated several objects in his room during the final seconds of the episode. There’s naturally a big difference between Reed identifying as a human and identifying as a mutant, and this proved to be the most inspired story turn for the Mutant Underground this week, nicely highlighting the different stakes for mutant sympathizers and actual mutants.

The busy storytelling of, “iMprint” doesn’t always flow perfectly well, like I said, but there was nonetheless a good helping of drama to enjoy for all of the main factions this week. It was good to see the Inner Circle take a break from Andy, and once again spotlight Lorna, while also effectively tying Lorna in with the psychological struggles of the Frost Sisters, or at least Esme. Lorna and Esme having a friendship, even a tense one, makes a lot of sense, since they both come from mentally disturbed backgrounds, and are both the products of two of the most dangerous villains in Fox’s live-action X-Men universe (yes, I know that Emma Frost has worked as a hero plenty of times in Marvel Comics lore, but she’s portrayed as a full-on villain in Fox’s X-Men universe). I’m also happy to see that Reed is taking a more active presence with the Mutant Underground’s front lines, now that the truth about his re-manifesting mutant abilities has come out. Lauren and Caitlin meanwhile more or less simply served to point out the obvious; That Rebecca can’t be trusted at the Inner Circle. Still, it was nonetheless interesting to see how Lauren’s relationship with her mother remains quite strained over their different opinions on Andy, especially considering that Lauren has so far spent much more time with Reed this season. I think The Gifted’s plot structure could do with some re-focusing in next week’s episode, but considering that the Inner Circle is about to hit another anti-mutant establishment, I’m sure that all of the world’s eyes will be on them soon!

The Gifted 2.6: "iMprint" Review
The Gifted is starting to become stretched a little thin this week, despite some great insight into the Frost Sisters, and a memorable first mission for Reed's mutant powers.
THE GOOD STUFF
THE NOT-SO-GOOD STUFF
2018-11-07
80%Overall Score
Reader Rating: (0 Votes)
0%