The previous episode of The Gifted certainly ended on a very bloody note a couple of weeks ago, after Rebecca massacred all of the helpless employees at Creed Financial! Naturally, this has once again created a rush of violence and unrest in the world, after news of Rebecca’s mass murder eventually reaches the news, and this development results in at least one member of the Inner Circle wondering if she needs to make a big change. “the dreaM” thus focuses very heavily on Lorna and her reaction to the killings at Creed Financial, while also providing a pretty meaty subplot with the Strucker family, who are one step closer to being able to suppress Reed’s unstable mutant attacks.

The heavy focus on Lorna is very welcome, since it finally allows us to start properly delving into where Lorna came from, and where she grew up. Fans of the X-Men franchise can probably fill in a lot of blanks in Lorna’s backstory here, but it was great to see the show finally exploring it properly, easily making for the strongest story draw in this episode! Periodically, the story will shift to flashbacks at various points in Lorna’s life, from her awkward adolescence, to her troubles with mental health and the law, and eventually, how she came to find peace with Marcos, before circumstance separated them both. We don’t ultimately see how Lorna met Marcos, but it was very gratifying to see the two share some happier memories in flashback, early during Lorna’s pregnancy with Dawn.

With the story primarily centering around Lorna in this episode, we also finally got some blunt confirmation about Lorna’s birth father, and yes, if you weren’t already aware from Marvel Comics lore, Lorna’s birth father is none other than Magneto, arch-nemesis to the X-Men, and founder of the Mutant Brotherhood! Lorna’s never actually met Magneto, granted, and her only connection to him is a mysterious metal disc that she received as a gift for her thirteenth birthday, but the exploration of Lorna’s knowledge behind her birth father feels very apt here. After what happened with Rebecca, Lorna is obviously very worried that she’s on the path to becoming the next Magneto. Thus, after some encouragement from Esme, Lorna decides to take Dawn away from the Inner Circle, for fear that she won’t be safe during the increasingly violent creation of the mutant sanctuary that the Inner Circle has dedicated itself to building.

This leads into another standout scene, wherein Lorna once again briefly reunites with Marcos (how does she know where he’s staying?), giving him an opportunity to say goodbye to his daughter, before she ships her off to a mutant school in Switzerland. Yes, apparently Charles Xavier is not the only person who runs a mutant school/sanctuary in Fox’s live-action X-Men universe. The resulting dramatic confrontation is fantastic, and seeing Marcos once again have to say goodbye to his infant daughter, due to circumstances beyond his control, is effectively tragic, especially with such a fantastic performance from Sean Teale and Emma Dumont alike this week! Surprisingly though, the show ends up throwing a great curveball with Dawn soon afterward, when Lorna actually gives her daughter to her Aunt Dane, her adoptive mother, realizing that her birth father had Lorna hidden for him, not from him, so that she would be removed from the violence that was seemingly necessary to improve mutant rights. This was a really clever way to have Lorna come to terms with her lineage from Magneto without embracing the same path as the arch-villain, and it’s especially awesome to see her bend the metal disc she got from Magneto into her iconic crown from Marvel Comics lore, allowing her to fully embrace her Polaris identity by the end of the episode. Lorna is not Magneto, and where she goes from here is unknown, but I’m definitely looking forward to seeing what’s next for her character! 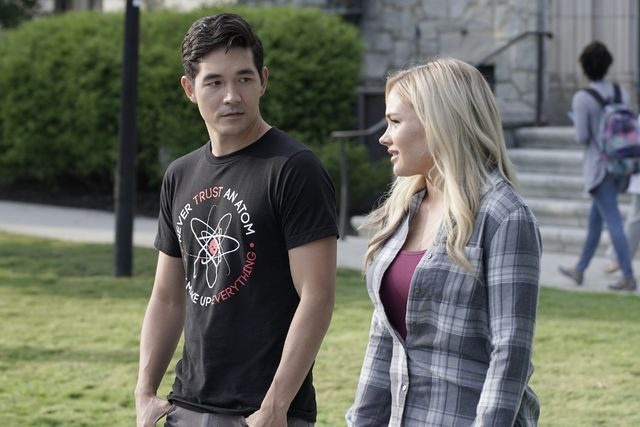 The subplot with the Strucker family was also pretty strong this week, as we finally meet the mysterious Madeline Risman, who was foreshadowed on The Gifted even back during Season One. Madeline seems to have the answer to Reed’s problems, successfully finding a way to suppress the uncontrollable flare-ups of Reed’s powers, using some help from Lauren’s genetics. The Strucker’s are even relieved to hear that Madeline has no interest in mutant politics, and only wants to help, even agreeing to shelter the Strucker family while she gets to work. Lauren even gets a great chance to make a friend and think about a seemingly normal existence at UNC at the same time, as proven by her new friend being another mutant working for Madeline. As you can imagine though, things aren’t quite so simple, as Lauren’s new mutant friend eventually blabs that Madeline wants to develop another mutant cure (yes, we’re going down the X-Men: The Last Stand road again, apparently), and Lauren might just be the key to it! We also got confirmation of another fact that many X-Men fans no doubt already suspected, namely that Madeline Risman is the sister of Matthew Risman, an enemy of the X-Men from Marvel Comics lore, who also happens to be the founder of the Purifiers in Fox’s X-Men universe! This is exciting, because it very likely means that Turner is about to find his way back to the Strucker family in the most unlikely of ways, ironically right after they’ve branched off from the Mutant Underground!

The only characters that were stuck with a slower storyline this week were John and Clarice, who have the thankless task of following Rebecca’s dimension-shredding trail in this episode, and not really doing much else. The two have a conversation about John’s apparent death wish when it comes to bringing down the Inner Circle, but it doesn’t truly register, since this does somewhat come out of nowhere. John’s been struggling far more with guilt than recklessness this season, and it seems weird that Clarice wouldn’t be at least a little sensitive to the fact that John has taken a lot on his shoulders, and is just trying to do right for his mutant family. Regardless, the two do eventually find Rebecca, who tips them off that the Inner Circle is looking for something called ‘Regimen’, before disappearing again. This tease doesn’t currently go anywhere though. Rebecca fleeing the Inner Circle even ends up being almost entirely pointless to boot, since Fade just abruptly recaptures her by the end of the episode. This just makes it feel like the show had to force an excuse to throw the Mutant Underground a bone through Rebecca’s temporary defection, since the trail of the Inner Circle had gone pretty impossibly cold.

Still, “the dreaM” provided a strong focus on family drama, while also continuing to elevate the stakes of Fox’s X-Men universe, in the wake of Rebecca’s violence at Creed Financial. I hope that the show doesn’t re-tread old ground with the whole ‘mutant cure’ storyline, which X-Men: The Last Stand already didn’t do the best job with, but at best, perhaps this will be a chance to present a better take on this story hook than 2006’s ill-fated X-Men movie threequel did. Clearly however, it was Lorna that ended up stealing this episode and running with it, finally directly confirming that her birth father is in fact Magneto, and finding a surprisingly poignant way to get Dawn away from the escalating violence that the Inner Circle is now facing. The separate dilemmas facing the Strucker family, the Mutant Underground and the Inner Circle alike all effectively set the stage for a pretty exciting midseason finale to follow this, with the entire world seeming like it’s set to erupt into full-blown chaos at any moment. With things so tense, perhaps Madeline developing another mutant cure might not seem like such a bad thing, even though I imagine that Lauren in particular will probably start immediately conspiring to destroy it, cost to the world be damned!

The Gifted 2.8: "the dreaM" Review
The Gifted delivered a strong focus on family drama this week, as Lorna decides to get Dawn away from the Inner Circle, and Reed's treatments may end up having world-changing consequences.
THE GOOD STUFF
THE NOT-SO-GOOD STUFF
2018-12-04
84%Overall Score
Reader Rating: (0 Votes)
0%