The Gifted certainly started 2019 off with a bang last week, allowing the Mutant Underground and Inner Circle to team up and hit the Purifiers hard, in turn rescuing the captive John. This came at the expense of the massive mutant prison breakout that’s currently ravaging the U.S. however, and thankfully, the fallout of that started to come more into focus during this week’s episode. “meMento” once again doesn’t waste the opportunity to hammer the Mutant Underground’s people some more, more or less continuing to make the war for mutant freedom virtually one-sided (Purifiers notwithstanding), but even with some of this episode’s flaws, the payoff to several of its plot elements continues to effectively lay the groundwork for what’s sure to be an exciting season finale in a few weeks.

The beginning of the episode is a little sluggish, spinning its wheels and continuing to have the Mutant Underground’s remaining forces debate about their lack of options, to initially no avail. Things don’t properly get interesting until Lorna forces Marcos’ car off the road a bit later, emotionally destitute, and confessing to Marcos that Reeva might be about to plan something that’s too terrible to ignore. No, really, Lorna?! You don’t say! Lorna’s shifting loyalties between the two major mutant factions have repeatedly come into play this season, to the point where I’m surprised that Reeva hasn’t become more concerned about it (maybe she’s distracted with all of that Hellfire Club-worthy scheming?), but the way that the show forces Lorna’s hand here is pretty contrived and out-of-nowhere. Essentially, Reeva hires a bunch of mutants that sunk a fully-crowded cruise ship off-screen, and this is what tips Lorna off that Reeva may be about go off the deep end. Apparently, the numerous other warning signs in Reeva’s rhetoric weren’t a good enough red flag for Lorna, but this is.

The prospect of Reeva being about to commit a massive terrorist act so irredeemably monstrous that humankind will immediately surrender any effort to oppress mutants is certainly interesting, especially since it seems to set the stage for another explosive season finale in the coming weeks. Still, hiring a bunch of loose cannon mutant mass murderers, simply because they were available, feels like a bit of a stretch for Reeva’s character, who is now in danger of shedding her moral ambiguity to become just as much of a twisted killer as the late Rebecca Hoover, if not even worse! I hope that there’s another twist with Reeva’s agenda waiting in the wings, because the Lorna/Marcos romance has been a little uneven this season, particularly on account of the show needing to keep coming up with excuses to test Lorna’s loyalty to the Inner Circle. The ending tease of Marcos and Lorna spying on a secret meeting between Reeva and Benedict Ryan is very interesting though, not to mention surprising! Does this mean that the constant anti-mutant hysteria being whipped up by Ryan is somehow just another step in Reeva’s plans? What’s going on there?

The Strucker family also got quite an interesting conflict this week, as Reed and Caitlin start debating whether Lauren becoming increasingly absorbed by her Von Strucker ancestors should be a concern. Lauren’s continued psychic connections with Andy seem to have triggered some sort of dormant connection to her grandfather and great aunt, since she’s started having vivid dreams about the violent death of Andrea Von Strucker, and how this eventually motivates Andreas Von Strucker to preserve the DNA of himself and his sister through a lock of intertwined hair, which is hidden in the music box that Lauren keeps listening to. Lauren’s intense dreams have even caused her mutant abilities to spin out of control when she sleeps, with Lauren now firing off sharp discs of kinetic energy that slice apart objects in the room! Naturally, the noise quickly arouses suspicion from the neighbours, and the Struckers’ landlord, who eventually calls the police in to investigate. 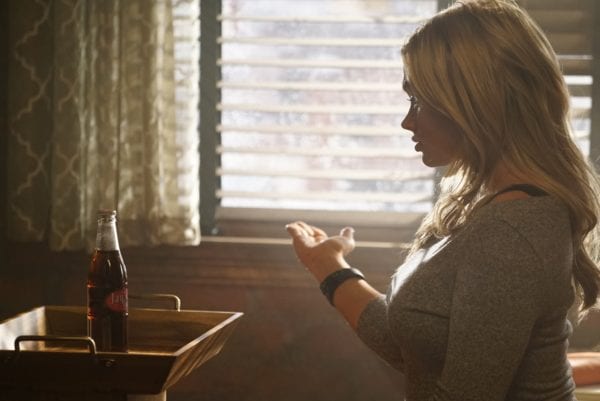 The increasingly corrupt Washington Police Department of this universe quickly becomes an issue again here, as you can imagine, with the cops beginning to harass Reed about harbouring mutants, before Caitlin convinces Lauren to create a distraction outside, drawing the cops away. Reed doesn’t like this risky plan, but it seems to have worked, and all is initially well… Until Lauren pays a visit to the landlord, and destroys several of his appliances before threatening to hurt him if he ever sends the police after her family again! Yikes! Looks like Reed is quite right to be worried about Lauren. There is a bit of an interesting debate between Reed and Caitlin that the show sadly glosses over this week, namely that Caitlin wants to use whatever means necessary to destroy the Inner Circle and get Andy back, while Reed thinks that Fenris is best off dead and buried, no matter what. It seems like shades of the Von Strucker twins are definitely starting to bleed into Lauren’s psychology either way though, potentially putting her on the same violent, unstable path that Andy has been on since he joined the Inner Circle!

There were two other major storylines this week, though one, the Morlock subplot, isn’t really that interesting, and simply involves Clarice trying, and once again failing, to motivate Erg to join the fight against the Inner Circle. Jace Turner and the Purifiers however get a more in-depth storyline this week, as Turner and Ted go to a foster home to try and look for mutant fugitives. Turner tries to appeal to one of the mutant kids, a young black boy who rightly draws parallels between the Purifiers and the Klu Klux Klan, but there’s no time to ponder this, as a gunshot is heard, and Ted is seen standing over the other mutant boy they found! Turner quickly deduces that Ted murdered the boy in cold blood, and Ted is indeed arrested for this, but Turner lies, claiming that the mutant attacked, and Ted killed him in self-defense. Seeing Turner subsequently reject a chance to see his ex-wife really nicely illustrated just how deep into the Purifiers’ cause that Turner has now sank, to the point where all he seems to feel now is hatred, confusion and sadness, even as he tries to claim that he doesn’t have a problem with mutants, so long as they follow the law. I’m very interested to see the fallout of Turner’s actions here, because if they can’t prove that the kid that Ted killed was a mutant, then Turner perjuring himself will also no doubt have bad consequences. 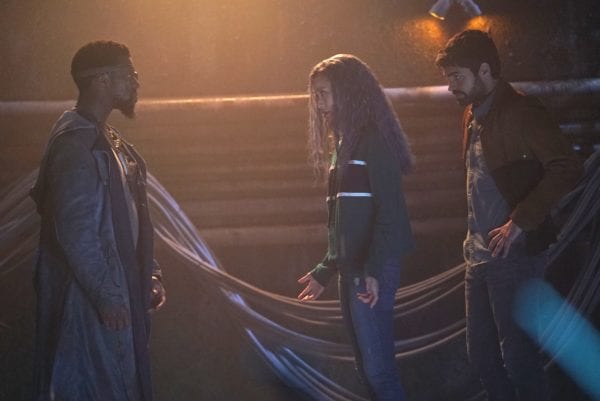 “meMento” felt like a bridging chapter for The Gifted this week, one that’s simply setting up more exciting plot developments for later, though it did have a good share of intriguing drama, even if not every story element fully worked. Reeva suddenly proudly getting into bed with mass-murdering mutant reprobates, even for mutant freedom, is pretty head-scratching, like I said, especially when it conveniently allows Lorna to yet again question the agenda of the Inner Circle for the umpteenth time. Likewise, the Morlocks and Clarice might as well have sat out this week, since the whole debate with Clarice’s loyalty, and Erg’s stubborn neutrality, have been firmly run into the ground at this point. Still, Lauren’s own temptation by the dark legacy of Fenris, and Turner now officially putting the cause of the Purifiers ahead of the law, both nicely tease some great story developments over the next several weeks, especially while Reeva’s plans reach a new phase. Evangeline calling together the remaining leaders of the Mutant Underground should hopefully give that faction a much-needed boost too, since they’ll be hurting more than ever if they end up losing yet another Strucker sibling!

The Gifted 2.11: "meMento" Review
The Gifted spent some time setting up promising story turns for later this week, as Lauren and Turner betray their moral codes, and Lorna begins to fear that Reeva can no longer be trusted.
THE GOOD STUFF
THE NOT-SO-GOOD STUFF
2019-01-09
78%Overall Score
Reader Rating: (1 Vote)
99%