NOTE: Full spoilers for this episode of, “Gotham”, including a potential character death, are present in this review

Gotham has had to spend a lot of time properly laying the foundation for its radical new status quo over the past several episodes, but things finally kicked into high gear at the conclusion of the previous week’s offering, when Haven was suddenly destroyed in a violent blast! “Ruin” picks up from the aftermath of this horrifying destruction, with most of what Gordon and the GCPD built now lying in shambles, while hundreds of survivors are now dead under Gordon’s watch. All the while, Selina’s hunting of Jeremiah continues, with Bruce and Alfred trying to keep up.

Overall, “Ruin” easily stands as the best episode of Gotham’s final season so far, since the storytelling feels tighter, and the stakes feel so much more grounded and exciting. We see Gordon and Bullock have to pick up the pieces for a terrified population of survivors, who now no longer feel safe. We see Nygma put together the final clues regarding his apparent nighttime activities. We see Penguin inevitably take advantage of Gordon losing Gotham City’s confidence to once again exert power. This all comes through a great combination of excitement, humour and some pretty solid detective work too, leading to this episode being pretty satisfying and well-rounded overall.

That said however, this doesn’t change the fact that the latest Gordon/Penguin alliance ends up going where every single Gordon/Penguin alliance always goes, without fail. The Gordon/Penguin partnership drama is beyond tired at this point, and seeing Penguin initially appear generous, before pulling the rug out from Gordon and exploiting a weakness on the GCPD’s part in order to re-assert dominance over the people, remains one of the most old and tired story turns on Gotham. The show at least tries to mix it up here, granted, with Zsasz being falsely accused of the bombing after he’s spotted at the scene by several witnesses, leading to Penguin putting him on trial at the GCPD, with the surviving citizens deciding Zsasz’s fate. It still comes down to the same result though, with Gordon saving Zsasz from an untimely end, then very nearly falling back into his old ways by almost killing Zsasz himself out of exasperation, before ultimately letting Zsasz go. Hey, wasn’t Zsasz running with one of the gangs in the city? The episode strangely doesn’t address that.

The way that the core storyline was tied in with the Nygma subplot however was great, especially when it ends up being the surprising means through which Zsasz is decisively found innocent, even if the population doesn’t care, and wants to execute Zsasz anyway. Nygma eventually finds enough clues to bring him to the GCPD offices, where he believes that an inmate file will have whatever information he needs to explain his latest nighttime amnesia. After Lucius catches Nygma snooping however, Lucius takes the opportunity to trade the file in exchange for Nygma’s expertise on the bombing at Haven. This is a smart idea, allowing two of the best remaining minds in Gotham City to put their heads together and find the culprit. This is of course on top of the innate appeal of Lucius having to work with a villain for the greater good as well, which helped to compensate for the more rote and predictable turns that the main Gordon/Penguin storyline was obviously going to take.

The payoff to the Nygma/Lucius subplot was pretty great too, especially when the evidence appears to point to some rogue military operation in the city. Since fans know that this is related to the imminent introduction of a militarized take on Bane for Gotham, this was a smart way to play with fans’ expectations. In the end though, it was actually Nygma’s alternate Riddler personality that was apparently the one that blew up Haven, as confirmed by a wheelchair-bound woman in the building across the street! Nygma presumably destroyed Haven to try and get to Penguin in his own ruthlessly efficient way, and seeing him kill the old woman by dumping her out the window with her own wheelchair was a pretty cool nod to a similar moment in 1995 movie, Batman Forever, when that movie’s Riddler murdered his boss in much the same fashion. It certainly seems like some things never change, and Nygma’s worse half is still seemingly gunning for Penguin more than ever, not caring who gets hurt along the way!

Speaking of not caring about who gets hurt, a handy GPS beacon planted by Selina allows Alfred to find the handcuffed Bruce at Jeremiah’s ‘church’, despite Bruce almost being killed by a few acolytes immediately beforehand (was Selina just going to accept that possibility?). After Alfred frees Bruce, the two go after Selina, who eventually finds Jeremiah at last! Apparently, Jeremiah and Ecco have been commanding acolytes to dig out a mysterious tunnel to an unknown location, which Jeremiah alludes to as being a, “Gift” for a friend. Does Jeremiah have a way out of the city? Or is this some other sinister plot? Either way, the, “Friend” he refers to is almost certainly Bruce, who ultimately fails to stop Selina from stabbing Jeremiah several times! Bruce and Alfred manage to flee with Selina, but Jeremiah appears to lay dead in the ensuing smoke. This feels like a fake-out, especially since footage of Bruce and Jeremiah fighting at the infamous Ace Chemical building was liberally shown during this season’s trailers, but if Selina really did kill Jeremiah, does this mean he’ll have to be resurrected? Or, is there yet another Valeska brother on the way? Like I said, probably a fake-out, but another good shock that will keep audiences on their toes. 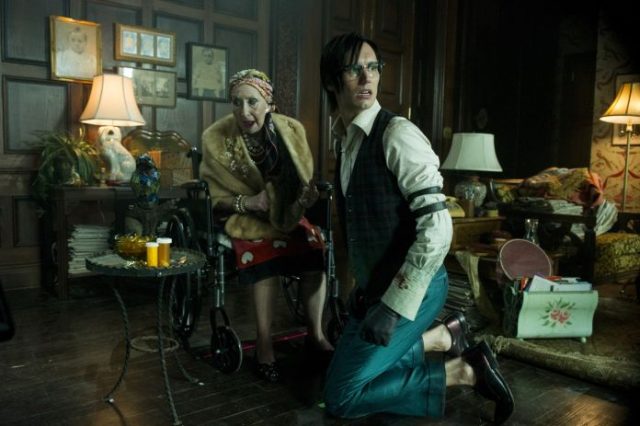 It’s good to see that Gotham’s climactic season is finally starting to get a real foothold, and, “Ruin” is finally starting to present some seriously exciting story developments, in the wake of Haven’s destruction. The shocking reveal that it was Nygma behind the blast was very unexpected, especially since he spent almost this entire episode trying to solve his own crime with Lucius! Likewise, Selina actually seemingly being successful in her efforts to kill Jeremiah raises some nice questions, even if surviving multiple stab wounds to the gut is something that I wouldn’t put past Jeremiah, all the same. I wish that the show didn’t have to keep pulling out the thoroughly exhausted Gordon/Penguin drama yet again, but the episode ending with Gordon kissing Barbara in the wake of events with Penguin was another shocking, and yet somehow fitting turn for the show, considering that Barbara remains Gordon’s first wife in DC Comics lore. Gordon nearly killing Zsasz shortly beforehand certainly appears to suggest that the pressure is starting to get to Gotham City’s current biggest hero, and quite literally getting into bed with Barbara could only lead to more incredible complications for what remains of the city!

Gotham 5.4: "Ruin" Review
Gotham's final season starts to better find its footing with the strong, "Ruin", thanks to a shocking twist regarding the Haven bomber's identity, and a reunion with Jeremiah that doesn't unfold as anticipated!
THE GOOD STUFF
THE NOT-SO-GOOD STUFF
2019-02-05
85%Overall Score
Reader Rating: (0 Votes)
0%