After their wacky trip inside of Mr. Nobody’s magic donkey during the previous episode, the Doom Patrol are left to try and scrounge through The Chief’s research, in hopes of finally tracking him down. “Puppet Patrol” once again took the heroes outside of Doom Manor, on a very humourous trip to Paraguay, after it’s discovered that the same donkey was hanging around there during 1948, at the same time during which Eric Morden became Mr. Nobody. This involves the gang hopping onto a bus for a very lengthy road trip to South America, one that goes about as well as you imagine it would.

Fortunately, Doom Patrol stays very strong in its third episode, uniting the entirety of the Doom Patrol for a wholly shared mission, rather than dividing them between multiple tasks. Despite everyone coming together however, it’s Larry that easily gets the most focus in this episode, as he keeps struggling to communicate with the energy being that lives inside of him. The episode is also filled with flashbacks relating to Larry’s former personal life, how his family fell apart in the wake of his accident, and how he struggled with hiding his homosexuality before his fateful flight. This Larry material was pretty great, nicely fleshing out Larry’s character even further than the donkey incident did, while also nicely leading into this episode’s kooky climax later.

Inevitably, it’s not as simple as spending two weeks driving to South America (I guess it’s not like the heroes have anything better to do anyway), so the gang is eventually forced to stop at a low-end hotel, nowhere near Paraguay. This results in one of Jane’s personalities, Flit becoming impatient, and simply teleporting Cliff and Larry to Paraguay with Jane. The twist that one of Jane’s personalities could have instantly teleported the characters to Paraguay the whole time is pretty hilarious, even if this does mean leaving Vic and Rita behind at the hotel for the remainder of events. Nonetheless, the characters chance upon an upbeat man named Steve, who wants to visit the Morden site, since the site’s employees apparently offer metahuman powers to anyone willing to pay for them.

The idea of separating Vic and Rita isn’t necessarily a terrible one, especially since Cliff and Larry have gotten noticeably more backstory focus at this point. Vic and Rita having no choice but to wait for their friends allows the two to commiserate together, though this merely results in Vic getting frustrated at Rita’s apparent cowardice and apathy toward the situation. This is where the Vic/Rita subplot could have really excelled, since Rita has often been the character that’s least inclined to leave Doom Manor, while Vic is new blood that’s extra youthful, often leading to him having the biggest desire to be a conventional hero, and do right by the world at large. It’s just too bad that this conflict isn’t ultimately explored to any meaningful degree, and simply feels like it’s there to fill time in the episode. Vic and Rita make up very quickly from their inevitable argument, and that just leads to this subplot feeling like something of a missed opportunity, especially when Silas simply calls to hand Vic the keys to the S.T.A.R. Labs jet soon afterward, following his refusal to do so at the start of the episode. What exactly changed Silas’ mind? 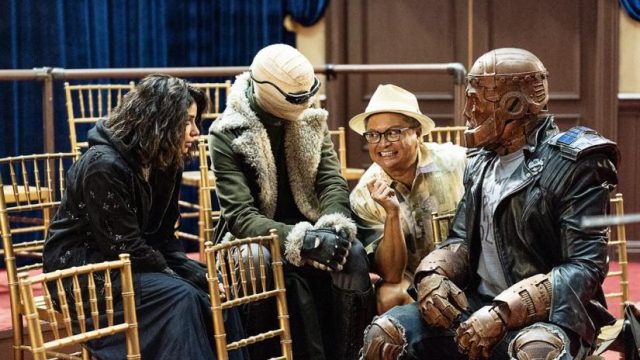 Fortunately, the events in Paraguay certainly don’t disappoint. After Cliff, Larry and Jane take a shuttle over to the Morden site, they are ‘treated’ to a very lengthy, very in-depth puppet show, which explains the backstory of Heinrich Von Fuchs, the mad Nazi scientist that turned Eric Morden into Mr. Nobody so many decades ago. Interestingly, the show opts not to have Mr. Nobody’s narration chime in here, with Nobody himself entirely sitting out this episode, in favour of more emphasis on Von Fuchs. Soon after the puppet show, which is indeed very funny and comical, Jane discovers that Von Fuchs is still alive, after she’s forced to barter her blood, following the Doom Patrol predictably not having the money to pay for metahuman enhancements. The fact that the employees don’t seem the least bit bothered by the appearances of Cliff and Larry only makes this more amusing.

This is where the episode also plays with another interesting idea; Cliff, Larry and Jane possibly having the opportunity to reverse their conditions, and become regular people again. Larry is especially tempted by this prospect, even going as far as to put himself into one of the negative energy pods, to try and separate himself from his energy being. The being refuses to leave however, and Larry is simply left to be salvaged from the pod… Shortly after Cliff and Jane brutally tear apart all of Von Fuchs’ employees! Cliff in particular is surprised at his own violence, with even Jane’s Hammerhead personality seeming initially horrified at it, despite her also butchering many of Von Fuchs’ slaves, before killing Von Fuchs himself. In the end, all that the heroes manage to grab before Vic and Rita arrive on the jet is a puppet made in the likeness of The Chief, making one wonder if they truly got anywhere. At least the trip was fun while it lasted though, right? 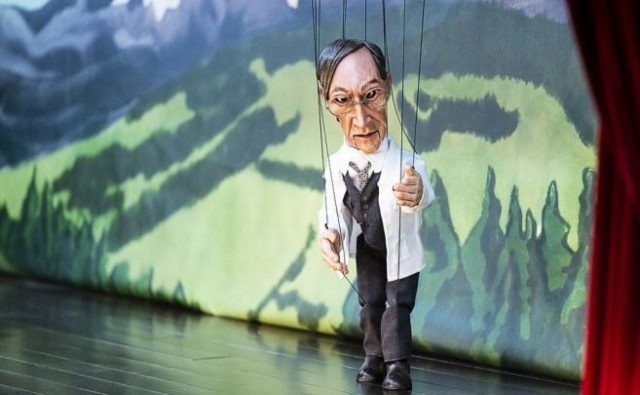 “Puppet Patrol” is another winning episode of Doom Patrol, taking the titular team even further outside of their comfort zone. The extended spotlight on Larry’s backstory felt very appropriate and satisfying, and the humourous montage of the group trying to travel in the bus, only to have Jane later instantly warp some of the characters to their destination, was comedy gold! The episode’s climax was also delightfully, violently insane, perfectly playing up the show’s twisted sense of humour and potent aftertaste of tragedy in equal measure. There was only so much time for Cliff, Larry and Jane to flirt with the idea of being normal, before that opportunity is obviously robbed from them, but the trip around Von Fuchs’ estate was well worth the wait, especially after it yields Steve being transformed into Animal-Vegetable-Mineral Man, one of the most bizarre, inexplicable super-villains in DC Comics lore! I do wish that Vic and Rita had more to do beyond simply being benched at the hotel, once the other characters reach their destination with Flit, but hopefully they’ll have some meatier storylines soon, assuming that puppet is actually a useful find.