With the Decreator summoned, and the Earth of the Doom Patrol/Titans universe about to be unmade, the heroes of Doom Patrol have to resort to very off-the-wall means to try and set things right. “Paw Patrol” caps off the two-part Cult of the Unwritten Book storyline in reliably insane fashion, as the show’s leads strike back against the Cult with their own eccentric theological solution, which results in a surprising team-up between The Chief and Mr. Nobody! There’s quite a lot of entertainment value here as a result, even if the defeat of the Cult isn’t always all it could have been.

With the Decreator gradually taking its time vaporizing every person and thing on Earth, the Doom Patrol, along with Kipling, are left to take stock, and simply realize that they’re out of options. This leads to some surprisingly sweet turns, particularly for Rita, who tries to suggest that Elliot do one thing he’s always wanted to do before the world ends, though Elliot sadly vaporizes before anything can be done, in a result that’s as weirdly funny as it is undeniably tragic. Since the heroes can’t do anything to stop the Decreator, it falls to The Chief to try and appeal to Mr. Nobody, who has been torturing him for amusement within negative space. Since Mr. Nobody needs a television world to play in, The Chief convinces him to work against the Decreator, so that Mr. Nobody can menace the Doom Patrol another day. 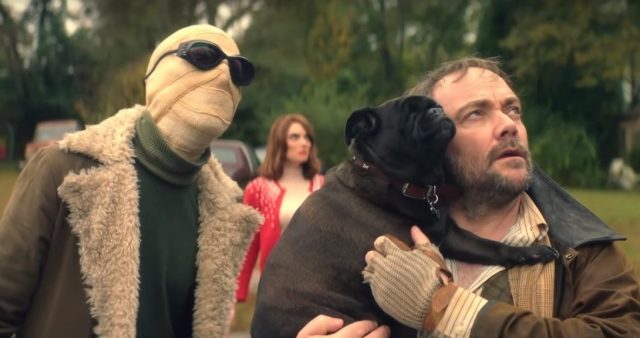 The solution that the two men come up with is so perfectly Doom Patrol that it hurts. Essentially, since Mr. Nobody can be omnipresent, and even travel through time, The Chief decides to send him after Crazy Jane, specifically as she previously existed in the 1970’s. We see a few peeks as to how Jane may have gained her unusual powers, and how she quickly ended up on the bad side of the staff at her mental institution, but the all-important personality here is Dr. Harrison, a bright green-eyed version of Jane that has the power to charm and persuade anyone she talks to into doing whatever she wants. We get a fantastic display of this when she almost makes a doctor stab out his own eye, but that’s not even the best part! Once Mr. Nobody meets Dr. Harrison in the past, he tells her to combat the Cult of the Unwritten Book in the most thoroughly ridiculous, and yet strangely logical manner possible; Start her own cult, and spread teachings for decades, so that another eye can be summoned to stop the Decreator!

Obviously, there are a lot of questions here, specifically when the plan weirdly works as intended, though since this is Doom Patrol, the baffling insanity fits this scenario incredibly well. It only gets funnier when we see that Dr. Harrison has quite the eccentric side as well, putting in all sorts of crazy counter-measures to prevent her new cult from being, “Misused by bad guys”, despite hilariously being designed as a way to save the world in the first place! These counter-measures include making the ‘Rewritten Book’, the antithesis to the Unwritten Book, a pug, instead of a person, leading to a pretty humourous initial misunderstanding for the Doom Patrol. They also include the stipulation that the pug’s sacred text can only be revealed if a bell is rung in Nurnheim, which the heroes don’t realize is within a snow globe situated in Doom Manor. Apparently, The Chief stole this snow globe from Kipling as well, because of course he did.

The actual process through which Dr. Harrison creates a cult, and coerces a bunch of mental patients into saving the day for the team, is very funny and satisfying, though the rest of the heroes’ character conflicts also feel a little undercooked in this episode, since so much focus is placed on Crazy Jane in this case. Larry moping more about his negative energy spirit doesn’t really go anywhere here, and while it’s sweet to see Rita trying to do right by Elliot, Elliot’s also not around long enough for this to really matter. Finally, Cliff being stuck in Nurnheim is also failing to yield many story dividends, despite Jane also being in there with him. In fact, the heroes encounter surprisingly little resistance in general when it comes to trying to stop the Decreator. There’s a bit of a missed opportunity here, since there likely could have been a few more scenarios mined from having to flee the Cult of the Unwritten Book with the pug. Perhaps that may have necessitated a three-part storyline though, and as Mr. Nobody says, that may have been just a bit too much.

Still, the team’s brief and bittersweet reunion with The Chief is well-earned at the end of the episode, which sees the Recreator overpower the Decreator in a staring contest, thus restoring the world to its proper form. The moment is especially emotional for Vic, who is interacting with The Chief in the present for the first time here. Unfortunately however, due to The Chief’s pre-existing alliance agreement with Mr. Nobody, which humourously makes The Chief vomit every time it’s brought up, he must return to negative space after the Decreator is stopped, once again leaving the Doom Patrol without a leader. To add insult to injury, Mr. Nobody’s getaway results in Cliff trying to fix the situation by sending an SOS to Silas, after Vic’s Cyborg armaments overcharge. The world may be saved, but the Doom Patrol probably aren’t going to be wanting for annoyances over the next while, as they must presumably resume their search for a way to bring The Chief home.

“Paw Patrol” had a bit of suspect story structuring, but the mission to stop the Decreator is at least incredibly funny, while also providing our most in-depth examination yet of the curious backstory behind Crazy Jane. The other heroes didn’t get quite as much in-depth plotting to work with here, especially when so many of their conflicts end up being swept away without much of a true payoff in the end, though the short-lived team-up between The Chief and Mr. Nobody also provided a good chunk of insane fun. In the end, the heroes are no closer to rescuing The Chief, who all too briefly returned to his home at Doom Manor, but once again, we can at least look forward to some new threats in the coming episodes because of this. Amazingly, Doom Patrol has barely scratched the surface of the DC Universe’s weirdest and most batshit insane threats at this point, so even if the team is still getting nowhere in their overall mission, at least they won’t be wanting for things to do together, as begrudging a superhero family as they are.

Doom Patrol 1.5: "Paw Patrol" Review
Doom Patrol concludes the Decreator conflict with another insane set of challenges for the team in, "Paw Patrol", even if not every story device is used to its full potential.
THE GOOD STUFF
THE NOT-SO-GOOD STUFF
2019-05-05
84%Overall Score
Reader Rating: (0 Votes)
0%