Search
Home
GamingE3 2019
When Nintendo Switch launched in March 2017, we theorized that there were already some ways that the Kyoto-based company could reduce the price of their new handheld-console hybrid to nearly $199 USD from its $299 price.As a few years have passed, and with many a rumour on the horizon as to new console hardware that could be making its way into the world soon, we think that Nintendo will go with a divergent approach for its system, not dissimilar to its regular-sized and XL versions of its DSi and 3DS handhelds.We expect Nintendo Switch to be offered in two varieties: we’ll call them “Lite” and “Pro”, though Nintendo will likely come up with much better monikers than that.
NINTENDO SWITCH PRO
Let’s start with the Switch “Pro” bundle, which we expect to include all the accessories that are currently included with the Switch: HDMI cable, dock, Joy-Con grip, and Joy-Con straps. Depending on usage data for how many people actually use the Joy-Con grip, Nintendo may decide to omit that, but that is neither here nor there, really.

The big difference in the “Pro” version of the hardware will be the Switch unit itself. Over the past two years, Nintendo has no doubt enjoyed cost reductions of some components necessary to build the Switch. They’ve also been likely pouring research and development money into figuring out how to get better performance from the device within the same physical constraints.

At the time of its release, it cost approximately $257 to manufacture the Nintendo Switch (and all its accessories), while that cost is likely sub-$180 at this point, as the price of just the display alone has fallen significantly. That amount of savings alone would be enough to increase some performance in the device and still remain under their original cost to manufacture. 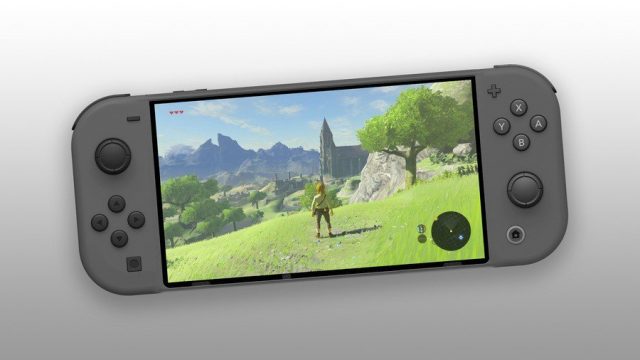 No, it won’t be a crazy redesign, though this Nintendo Life mockup does look insanely cool. (External link)

An easy increase in performance would simply be doubling the RAM from 4GB to 8GB. While memory prices have remained relatively stable over the past few years, it would be a simple solution to improve performance for games like Breath of the Wild, DOOM, and Skyrim.

Another improvement, and likely the only other one they would have to make, is the processor. The Nvidia Tegra X1 that the original Switch uses was a bit of an underpowered, outdated chip at the Switch’s release, let alone two years later. Switching to a Tegra X2 would serve as a modest improvement in power by about 50%, while memory bandwidth would double. The X2 would also serve up a slight improvement in battery life and other efficiencies across the board, so that the thermal requirements of the device don’t change, as a Switch external redesign is not in the cards so soon after the console’s initial launch.

While we’re not writing this as a wish-list of things we want to see, it wouldn’t hurt to also increase the internal storage for users who are buying this new, updated console. The current 32GB of memory is a bit paltry, considering the amount of downloadable titles on Switch, but we don’t see Nintendo going beyond 64GB, if they do any memory increase at all. A 200GB SanDisk microSD card can be had for around $30 USD on Amazon, so we’re not talking about a huge deal for consumers to buy their own. Heck, Nintendo could throw in a 128GB card, costing them a few dollars per console, and buying a lot of respect from gamers. But no, we don’t expect that to happen.

The display on the handheld is just fine, touch controls work great, the Joy-Con rails and controllers themselves don’t need to be changed, and the dock itself, while just a shell to house what is essentially a USB-C to HDMI adapter inside, is all standard fare stuff that doesn’t require any change.

This Nintendo Switch “Pro” (or Core, or Upgrade, or Mega Kit, or whatever you want to call it) bundle, we’d wager, will be available for the same price that Nintendo currently offers the Switch: $299 USD.

Nintendo Switch “Lite” (perhaps the “Basic Kit”, though we’re not sue they want to borrow from their Wii U anachronisms) is where things would get a bit more interesting, even though it means Nintendo changing virtually nothing.

The console itself will remain the same as the 2017 release, currently available, non-“Pro” model. The box, however, will be much smaller, as it will include the Switch unit itself, a set of Joy-Con, and a power cable, eschewing the inclusion of an HDMI cable, dock, Joy-Con grip, and Joy-Con straps. 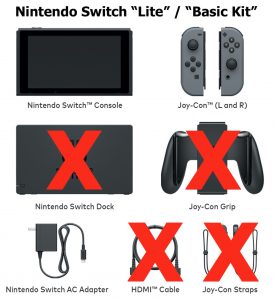 The accessories included in the box for the console are each sold separately, and total about $110-$120 in added value. The dock, charging cable, and HDMI cable come bundled for $90, while the wrist straps and Joy-Con grip aren’t sold separately but would likely be about $10-$15 each if sold separately. (The Joy-Con Charging Grip is $30, but has additional functionality above the one included in the Switch launch bundle.)

Keeping the original model intact would mean that the Switch retains all of its base functionality, and still leaves consumers open to buy an HDMI cable and dock should they want to connect it to their TV another time. It also means they can still go to a friends house and use their dock, or borrow it when they’re not using it. The idea of people owning multiple Switch docks for every room in their house didn’t really pan out they way they thought it might.

A cheaper, portable-only Switch bundle wouldn’t dilute the company’s message, either. The console could still conceivably connect to a TV with a USB-C to HDMI adapter, or used in tabletop mode with the Joy-Con in each hand for those at-home gaming sessions. Many gamers will choose to use the Switch as a portable console rather than docked at home, and a lower price would certainly bring more gamers into the fold who might otherwise balk at a $300 price tag.

Some have postulated that a Switch “Lite” would mean a redesign to include built-in Joy-Con, while we think it to be the exact opposite. The “Lite” model is the one we currently have, minus all the extras in the box, and running on the current hardware. The “Pro” model is going to have a light series of spec bumps just to run things a bit smoother. It won’t be enough to pump out such better graphics that the other console shows its age, but you’ll get less pop-in and perhaps a slightly farther draw distance in open world games, for example.

Besides, a Switch that can’t really switch? That doesn’t make a lot of sense to us.

This all leads us to the conclusion that Nintendo could likely offer its Switch “Lite” console for $199, a full hundred dollars less than it currently is, simply by omitting some of the things in the box. Ditch the aforementioned accessories, and Nintendo could sell the Switch with just the Joy-Con and a charging cable, turning their latest console into a near-impulse buy for many consumers.It may also settle some of the debate between that new Xbox One S All-Digital Edition that still retails for $50 more, despite having only removed the disc drive and, well, nothing else. Consumers may have an easier decision as to what console to buy come this holiday season, which is when we’d expect these consoles to be released. Given that it doesn’t look like we’re getting a new system from Sony or Microsoft this year, Nintendo could scoop up some holiday console sales with little, if any, competition from other hardware manufacturers.

Nintendo likely bundled everything with the Switch from the beginning to increase perceived value while making more profit. The dock, grip, wrist straps, and cables are likely less than $30 to produce but add $100 to the package. Various USB-C to HDMI adapters which also charge a device and include a standard USB-A port retail for about $60. Nintendo’s dock does exactly the same thing. Currently, such a cable doesn’t work, but that doesn’t mean the firmware couldn’t be modified to allow it.

What do you expect Nintendo to do regarding its Switch hardware offerings? As this seems to be an off-year for other console manufacturers, it would seem the time is nigh to get moving on the console update, and while we’re not expecting to see it at E3, just before or just after would be as good a time as any.

Nintendo has a habit of surprising us with Direct presentations just days away, so don’t be shocked if one crops up in the weeks leading up to E3 2019.