Keanu Reeves saw a massive career resurgence with 2014’s superb action-thriller, John Wick, where he brought the title character to brutal, bloody life with exceptionally memorable skill. Amazingly, the movie’s 2017 sequel, John Wick: Chapter 2, also proved to be pretty great, maintaining the same amazingly vicious, yet beautifully-choreographed excitement throughout its runtime. That sequel ended with quite the promising cliffhanger for a third installment to boot, as John ends up having to kill John Wick: Chapter 2’s lead antagonist within the safe haven of the Continental hotel, resulting in John being excommunicated from all assassin services, while also getting a gigantic contract placed on his head, which would see every assassin in the New York area become desperate to kill him! 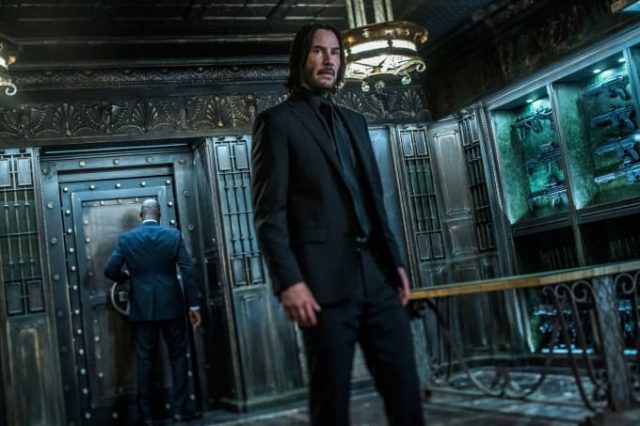 Somehow, the John Wick franchise just keeps on delivering, providing the best thing to happen to action movies in many, many years. That incredible momentum is beautifully maintained in John Wick: Chapter 3 – Parabellum as well, a sequel that proves that there’s no sign of the title character slowing down, and the same is true of his universally impressive action movie franchise. What’s even more impressive is that John Wick: Chapter 3 – Parabellum somehow manages to be even better than its predecessor to boot, possibly even standing as the series’ best offering to date! Better still is that it just keeps upping the stakes, capitalizing on the opportunity to not forcibly end itself as a trilogy, now that Keanu Reeves and Summit Entertainment have both confirmed that a fourth movie is set to release in May of 2021. As far as I’m concerned, there’s no reason to slow down either, particularly not when John Wick: Chapter 3 – Parabellum would appear to indicate that its titular assassin is still, even now, just getting started!

There are many imaginative, yet effectively simple personalities throughout the assassin-rich world of John Wick, and while that remains true in the series’ third installment, it’s once again the central performance of Keanu Reeves as John himself that ties everything together most of all. Reeves continues to make John quite easily his best character since Neo from the Matrix movies of so many years ago, and by the third go-around, Reeves has begun to fit into John’s psyche like a slick, ruthlessly efficient glove. Reeves gets to keep developing John’s ever-increasing anger and desperation to especially heightened effect in John Wick: Chapter 3 – Parabellum as well, with this latest sequel seeing him well and truly alone as it begins, what with John being rendered, “Excommunicado” from his assassin guild, after the fallout from the previous sequel.

Of course, several other returning players from the previous movies return as well, including Ian McShane’s Winston, who sees his own consequences for not just killing John and being done with it, Lance Reddick as Charon, the Continental’s ever-polite and ever-faithful concierge, and Reeves’ fellow Matrix movies alum, Laurence Fishburne as the Bowery King, the secret crime kingpin and information gatherer who came to John’s aid during the previous movie. Among the new faces in the sequel are Asia Kate Dillon’s unnamed ‘adjudicator’, sent by the assassin guild’s, “High Table” to ensure that John is eliminated and that all allies of his are punished, Mark Dacascos’ Zero, the main assassin and muscle hired to do the adjudicator’s dirty work, Anjelica Huston’s ‘director’, who has a key connection to John’s past, and Halle Berry’s Sofia, a former assassin buddy of John’s that he’s eventually forced to call on in order to survive.

As usual, most of these characters have long careers and lives that are largely shrouded in mystery. Once again though, John Wick: Chapter 3 – Parabellum, as with the two previous John Wick movies, actually benefits from its lack of character exploration, and almost complete omission of backstory with the supporting cast especially. This is because John Wick: Chapter 3 – Parabellum is yet again exceptionally skilled at creating intriguing implications and mystique behind all of its personalities, letting the audience fill in the blanks within a world that just keeps becoming more expansive and strangely inviting with every new John Wick movie. You continue to feel like you know both everything and nothing about these characters, whose reputations are written within their appearances and tics, bringing you just close enough to maximize the incredibly potent illusion of this franchise’s world, without bringing you so close that the illusion is disturbed.

The stakes behind John Wick: Chapter 3 – Parabellum are made known and are ever-present right from the jump. Now left without any of the Continental’s resources or allies, and with a lucrative $14 million contract being placed on his head, John and his dog are, “Excommunicado” and on the run. John is only given one hour to prepare himself for the onslaught of killers that will do anything to claim the hefty cash reward for his assassination, and from there, it’s a non-stop thrill ride from start to finish. That’s no exaggeration either! The ever-present threat of the High Table and their need to punish John, in order to preserve the rules of the assassins’ guild, carries this entire sequel with aplomb, keeping the stakes simple, and very, very dangerous.

In many respects, John Wick: Chapter 3 – Parabellum is as primal and straightforward as an action movie can get. Even then however, the constantly unpredictable imagination and lore behind the movie’s world keeps the various set pieces and action beats perpetually surprising and engaging, with John’s desperate struggle to survive continuing to evolve with every passing minute, as he’s forced to endure the unyielding wrath of the masterminds at the High Table. It’s a very simple story, and yet, I couldn’t possibly spoil a single detail. I suppose that nitpickers could make the complaint that those not coming for the action and intrigue are not going to find much else in this sequel, but that’s hardly a knock against it. After all, the John Wick movies have mastered the art of turning violence and murder into an elegant, strangely beautiful ballet of bloodshed, and John Wick: Chapter 3 – Parabellum only makes that elementary, but effective story recipe more delicious to consume than ever for action movie enthusiasts!

Chad Stahleski once again returns to direct John Wick: Chapter 3 – Parabellum, and as with his efforts helming the previous two John Wick movies, Stahleski’s direction is nothing short of sublime in all respects here! The creative and memorable world of the John Wick universe remains just as much a compelling character as John himself, thanks largely to Stahleski’s direction. Stahleski continues to realize every set piece with painstaking attention to detail, creating genuine action-packed poetry over the course of John’s journey to survive his pursuers. That’s before considering the stunt direction as well, which remains wonderfully choreographed and often squeamishly brutal, packing in lots of impressive long takes and extremely tight action cues, which deftly shows off just how tightly the action is realized throughout this movie. As with its two predecessors, John Wick: Chapter 3 – Parabellum consistently resets the bar for the action movie genre, delivering a fresh helping of some of the finest stunt work that Hollywood has managed to produce in the modern era!

Again, it’s a playbook that Stahleski has gotten very good at going back to by this franchise’s third installment, but when John Wick: Chapter 3 – Parabellum just keeps raising the quality and excitement of the series, it’s tough to complain about that. Stahleski’s direction is something to truly admire when it comes to both world-building and action choreography, in turn tying everything together with an unorthodox, but genuinely effective marriage between hyper-professional class and pulse-pounding grit. All the while, the sense of energy and ever-escalating momentum never appears to waver, with John Wick: Chapter 3 – Parabellum confidently passing up the urge to wrap itself up as a well-realized trilogy, in favour of marching boldly forward into its upcoming fourth installment. When Stahleski and the other filmmakers are clearly still overflowing with this many great ideas as well, that bold move becomes something to anticipate, rather than something to fear.

Much like its title character, John Wick: Chapter 3 – Parabellum seems to be immune to exhaustion. This series’ latest sequel not only manages to be an improvement over its still-great predecessor, but also keeps throwing open yet more doors for the John Wick franchise’s future, without even one warning sign of creative stagnation all the while! It’s another fantastic testament to what Hollywood can achieve with a commitment to originality and imagination in its franchises, and despite John Wick: Chapter 3 – Parabellum having less than half of the budget behind most big screen blockbusters, it nonetheless performs circles around much of the competition, particularly in regards to its sheer ferocity and perversely violent beauty.

It’s certainly true by now that you should know exactly what you’re getting into with John Wick: Chapter 3 – Parabellum, and that’s a whole lot of brutal, stylish violence, without much of an emphasis on explaining itself. In indulging that simple, violent delight with such inspiration and skillfulness however, John Wick: Chapter 3 – Parabellum continues to unfold as a ferocious opera of death, one that continues to inject some of the most potent ingenuity that the modern era has managed to provide for the action movie genre as a whole. John Wick himself continues to remain lost in the realm of cutthroat professional killers that he once managed to escape, but as long as his efforts to fight it continue to provide this much outstanding entertainment, believe me when I say that I hope he never breaks free of it again!