With Vic being captured by the Bureau of Normalcy, and stashed in the Ant Farm, the very same top secret facility that once studied and tortured Larry after his accident so many years ago, the rest of the Doom Patrol is left to try and figure out how to rescue their ally, as expected. All the while, “Cyborg Patrol” also continues to flirt with the idea of Vic becoming gradually more machine, and gradually losing more and more control to his operating system, Grid. The only solution to this whole mess is to call upon Silas, who is the team’s only hope to at least get into the Ant Farm. Despite a fun heist element to this episode though, “Cyborg Patrol” feels like a bit of a shakier Doom Patrol episode, particularly since it takes quite a while to actually get going.

On the bright side, Doom Patrol’s kooky sense of humour once again returns in full force within this episode, right from the very beginning, when Bureau of Normalcy boss, Darren Jones briefs some military and government brass, complete with a general awkwardly eating a McDonalds hamburger. After revealing that his team has captured the famous Cyborg though, Jones’ superiors wonder if this will upset the Bureau’s relationship with S.T.A.R. Labs. Jones, however, seems to think that everything is completely under control, with a plan to study and isolate Cyborg going on as planned. 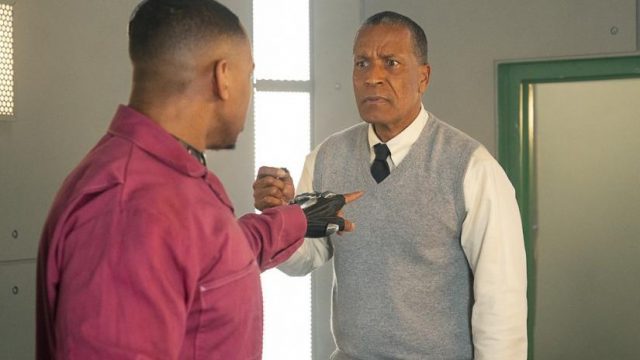 There are some interesting ideas at play here, namely the fact that the Bureau of Normalcy has some kind of previously standing relationship with Silas. Frustratingly though, the episode doesn’t really explore this all that much. Even Vic’s friendly prison neighbour, who can seemingly hear Grid’s glitchy commands from the adjacent cell, doesn’t end up contributing much to this episode’s storyline. Vic instead spends his entire storyline simply languishing and screaming in his cell, waiting for his team to come rescue him. Admittedly, there is a pretty great payoff with this later, but it’s unfortunate that most of the episode’s Vic material feels like it’s merely wasting time, and constantly going over the same simple slice of drama over and over again. Maybe the idea is to give the audience a sense of the same mentally exhausting tedium of imprisonment, while Vic’s A.I. is somehow endlessly repairing and repeating itself, but it doesn’t totally work, at least not until the resolution to this story arc.

The intro segment of this episode is also pretty sluggish, as the other heroes waste quite a lot of time debating whether or not to go to the Ant Farm and rescue Vic, even though they obviously will. Eventually though, Silas bursts into Doom Manor, demanding to know where Vic is, and Larry confesses that he’s been captured by the Bureau of Normalcy. It’s here that Silas learns about Grid’s glitches, and how it appears to be turning Vic into more machine than man. This effectively motivates Silas to team up with the remaining Doom Patrol members and get Vic out of the Ant Farm, despite Rita’s hesitation. Considering the events of the previous episode, some may be frustrated that Rita is once again acting like a wet blanket and refusing to help her friends, though admittedly, the show did nonetheless nicely play with Rita’s usual ‘mission’ stance pretty well here, which becomes apparent in a pretty funny payoff during the actual heist to rescue Vic.

Once the episode actually does get going, we do get an overall humourous and fun heist at the Ant Farm too, between violent elevator rides, Larry having to awkwardly disguise himself as a Bureau of Normalcy soldier, and the team inevitably getting captured almost as soon as they walk in! This results in Cliff getting fastened to a cell ceiling by a magnet, Larry getting his negative energy spirit extracted, and Jane having to endure comical torture threats from the man whose arm she broke during the previous episode. It turns out, in an inspired twist, that this is all part of the plan as well. Despite initially appearing to stay behind, Rita does come along in the end, helping Cliff escape after literally slurping out of his robot mouth, even if Jane’s Karen personality makes a brief return to get Jane herself out of trouble, without direct help from Rita. Larry deciding to voluntarily take his spirit along during the escape too, and free all of the other Bureau of Normalcy prisoners in the process, is also a pretty good turn, especially when the flood of killer ‘butts’ that were apparently in one cell appears to kill both Darren Jones and his top brass, while also motivating the rest of the Bureau of Normalcy’s managers to commit suicide. It’s ridiculous and irreverent, and very true to the hilarious, yet dark tone of Doom Patrol!

Silas finding Vic during his heavy glitching is also a pretty great payoff, at least for the most part. Silas tries to appeal to his son, saying that he only wanted to protect Vic with the self-repairing nanites, which he installed, despite their risk of diminishing Vic’s humanity. When Vic sees a video feed of Silas appearing to condone the nanites turning Vic into a total machine however, he becomes enraged, violently beating on his father! It turns out that the Grid glitching, along with the false feed of Silas condoning the loss of Vic’s humanity, were all ploys by Mr. Nobody though, who effectively tricks Vic into beating his father nearly to death! This was not only a smart way to play with the expectations of DC fans, who know that Grid has a tendency of overtaking Vic’s mind and body in various other DC media, but also a nicely dramatic way to end what’s otherwise a pretty light-hearted Doom Patrol episode. I don’t think that Silas is truly dead, since Vic didn’t beat his father that badly, despite Mr. Nobody’s claims, but Vic being tricked in such a tragic way is bound to have big consequences for the season’s final few episodes, as Vic will no doubt become more determined than ever to bring Mr. Nobody down, at any cost! 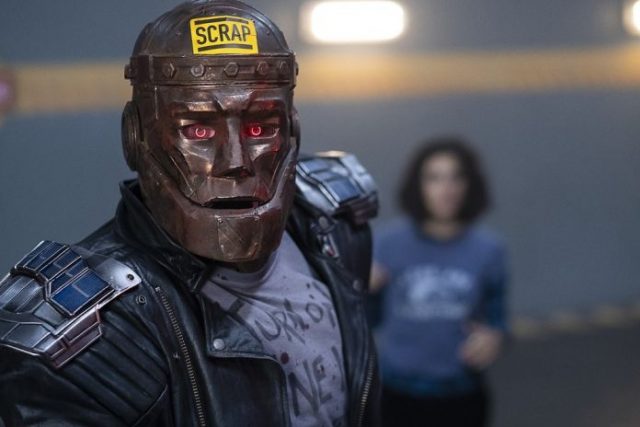 “Cyborg Patrol” provides several great turnouts for what’s otherwise a slightly uneven Doom Patrol episode, particularly after Vic’s surprising attack on his father nicely punctuates everything with some boosted stakes in the ongoing battle against Mr. Nobody. The Bureau of Normalcy’s supposed end at the hands of killer butt monsters that the Doom Patrol unleash during their escape feels both hilarious and fitting too! Even if the first half of this episode is pretty damn sluggish, the actual heist on the Ant Farm nonetheless provides a good dose of humourous, zany entertainment. Some of the Ant-Farm’s plotting in this episode is truly clever, but it sucks that there are so many dry spots that don’t manage to engage viewers as effectively during the early stretches. Compounding that issue is the fact that Doom Patrol is finding yet another excuse to distract the heroes from looking for The Chief, which is supposed to be what their main mission is! There’s still three episodes left in Doom Patrol’s debut season though, and with the question of Flex Mentallo still hanging in the air, hopefully the show can ride this wave of renewed humour to an appropriately memorable season climax from here.