With Al still missing, and no leads relating to her whereabouts being apparent, Morgan’s group decides to map out the mysterious walker-entangled roadblocks that dot the nearby Texas landscape. Thus, Fear the Walking Dead goes through another episode without Al, and even without Strand and his party to boot, though at least that latter note makes sense, when one considers that Strand actor, Colman Domingo actually directs this episode! “Humbug’s Gulch” proves to be Season Five’s best episode so far as well, presenting a strong focus on John and June, after they’re both forced to take shelter from a dust storm, only to be ambushed by a mysterious survivor.

The effort to map out the walker roadblocks presents some initially intriguing evidence, namely that they appear to form a circular perimeter around the nearby area. This definitely starts to narrow down exactly where this mysterious party of survivors that seemingly made the walker blockades is holed up, possibly also indicating a path toward Al, though at this point, Al’s trail has still gone cold. Instead, Morgan takes a separate route, while Alicia takes Luciana with her, to keep mapping out different roadblocks, aside from John and June. John and June running into trouble instead separates them into their own subplot at the titular Humbug’s Gulch, while Alicia is left to overhear walkie-talkie chatter from the three kids her group encountered before, Max, Dylan and Annie. 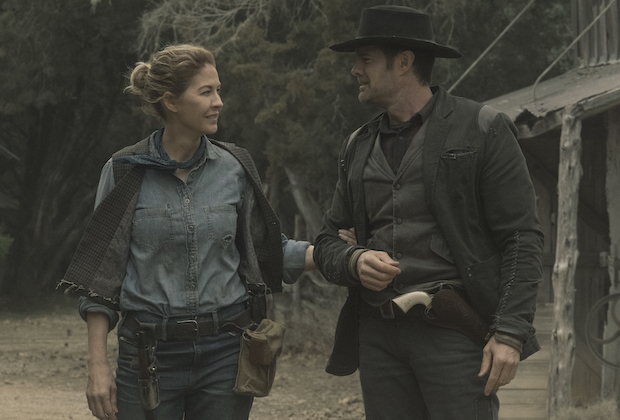 It was inevitable that Max, Dylan and Annie would resurface before long, continuing to try and scavenge out their own living, despite the extensively unrealistic odds that kids like them could ever survive in this world, let alone thrive. Alicia nonetheless tries to hail the kids on the radio some more, only to keep being told to go away. Alicia continues to try to appeal to them however, eventually confessing to the kids that she’s feeling what they are feeling, having lost her own mother and brother by this point. This actually made for a pretty good sequence, as Alicia is finally forced to confront her losses, rather than burying them under a continued desire to punish walkers. It would have been ideal if Alicia was acting like the smart character that she’s supposed to be though, rather than the loose cannon that she’s been all season so far. For some reason, Alicia is still ditching Morgan and being inconsistent with her location, despite claiming that she’s not being impulsive. Uh, Alicia, when you make unilateral decisions and leave Morgan high and dry, that’s exactly what you’re being!

Fortunately, all of the material at Humbug’s Gulch helped make up for some of the frustrations with the Alicia subplot. After being forced to take shelter in the Old West-themed amusement area, John tips June off that there are actual live guns hidden in the right spot, which they can use to give themselves more weapons and ammo. While scavenging, June also comes to learn about some more of John’s former life, namely that he used to work as a trick shooter at Humbug’s Gulch! John may have been a cop at another point in his former life, but it turns out that he was also a skilled trick shooter, despite initially denying feats of theatrics during his time working at Humbug’s Gulch. This would certainly track with John’s incredible shooting abilities to date, which have otherwise seemed so over-the-top that they’re occasionally difficult to believe in action!

What’s already a sweet and gratifying John/June storyline at Humbug’s Gulch gets even better too, after John and June get shot at by a mysterious individual, whom John manages to wound, before cornering him at another part of the area. The mysterious attacker is then revealed, and it turns out to be none other than Dwight! For those unaware, or those who have possibly forgotten the details, Dwight was originally introduced as a character on AMC’s main Walking Dead series, in turn being adapted directly from the original The Walking Dead comic books. He was originally a lieutenant of one of the main Walking Dead show’s deadliest arch-villains, Negan, but after Negan and his gang, the Saviors were defeated during the events of The Walking Dead’s eighth season, Dwight was exiled from Alexandria by Daryl, and told never to return. Dwight then decided to go look for his missing wife, Sherry, with his storyline formerly being left to the imagination after that.

With Dwight’s return on Fear the Walking Dead, we can now see a glimpse of what Dwight has been up to since his time on the main Walking Dead series, namely pursuing leads on Sherry, and still failing to find her. After mistaking John and June for two people that may have hurt Sherry, since the car they’re driving apparently has a clue related to Sherry’s whereabouts, John and June decide to take Dwight with them, promising to help him look for Sherry, after they all hide out from the dust storm and the walkers. After working together in a pretty fantastic sequence to try and reach the exit vehicle however, Dwight makes a break for John’s and June’s car, which he inadvertently shot the tires out from beforehand. After failing to find what he was looking for in the car, Dwight then contemplates suicide, with June having to talk him down, urging him to carry on. June using her own experiences and mistakes to motivate Dwight to keep living was fantastic, as was Morgan reuniting with Dwight soon afterward, and forgiving him for his time with the Saviors, saying that everyone in his crew has mistakes to atone for.

It’s awesome to see Dwight make such a great first impression on Fear the Walking Dead, ultimately being just as much a worthy part of this spin-off as Morgan has proven to be. It’s too bad that this episode’s final twist is a bit stupid though, with Morgan’s party eventually being radioed to Dylan’s location, after encountering another walker blockade. After finding Dylan bloodied, the episode then reveals that Max and Annie are setting up another blockade, wanting to drive Morgan’s group away from them for good somehow. Okay, this is stupid on multiple levels. First, how in blue hell did a couple of teenagers manage to wrangle and arrange walkers like this?! Second, if Max and Annie are supposed to be so intelligent and resourceful, why are they talking on open walkie-talkie channels, if they’re concerned about Morgan’s crew listening in on them? Finally, why exactly are Max and Annie still distrusting Morgan’s party? I get that you’re not supposed to trust anyone during the walker apocalypse, but Morgan’s group is clearly doing fine, and it’s not like the kids have anything on them that’s really worth stealing. This entire story turn just doesn’t make sense at all when you really think about it.

Still, “Humbug’s Gulch” nonetheless remains the strongest episode that Season Five of Fear the Walking Dead has managed to deliver at this point. The core John/June storyline exceptionally carries the episode, providing a cool Old West flavour that director, Colman Domingo exceptionally accentuates to strong effect. The re-introduction of Dwight from the main Walking Dead series is also superb, presenting another great crossover effort for Fear the Walking Dead that allows pivotal The Walking Dead characters to continue their storylines, without intruding in major story developments on The Walking Dead proper. Alicia’s still come down with a bad case of survivor stupidity for the time being, but at least the heightened focus on two survivors that have largely avoided making stupid decisions so far this season proves to be quite refreshing here. I’m not about to believe that all of these walker blockades are the result of a bunch of punk kids though. Hopefully Fear the Walking Dead can eventually come up with a much better excuse for an impending threat than that.